The dismal record of the Indomitable Lions of Cameroon continues after the side failed to escape the group stage of the FIFA Qatar World Cup, despite pulling off a historic victory against Brazil in their last group game at the Lusail Stadium. For the past twenty-eight (28) years, Cameroon has not crossed the group stages of the World Cup, the last time they did so came back in 1990.

When the next world cup comes around,

in the USA, Canada and Mexico, the Indomitable Lions will clock thirty-two (32) years that they haven’t made it out, something the side will be desperate to change.

While Brazil had already advanced to the next round, the victory on December 2 belonged to Cameroon, who became the first team to beat the five-time champion in the World Cup group stage since Norway did it at the 1998 tournament in France – ending Brazil’s unbeaten run of 17 group matches.

The win – which was sealed by a powerful header from Cameroon’s Vincent Aboubakar in the 92nd minute from a cross from Jerome Ngom Mbekeli – marks the first time an African nation has beaten the Brazilians at the FIFA World Cup.

Cameroon, which opened with a 1-0 loss to Switzerland, had endured a small crisis after its 3-3 draw with Serbia, with goalkeeper Andre Onana being sent home for disciplinary reasons after a dispute with coach Rigobert Song. That caused a mixed reaction amongst the Cameroonian supporters with some against the mode of discipline, hours before a major encounter against Serbia. 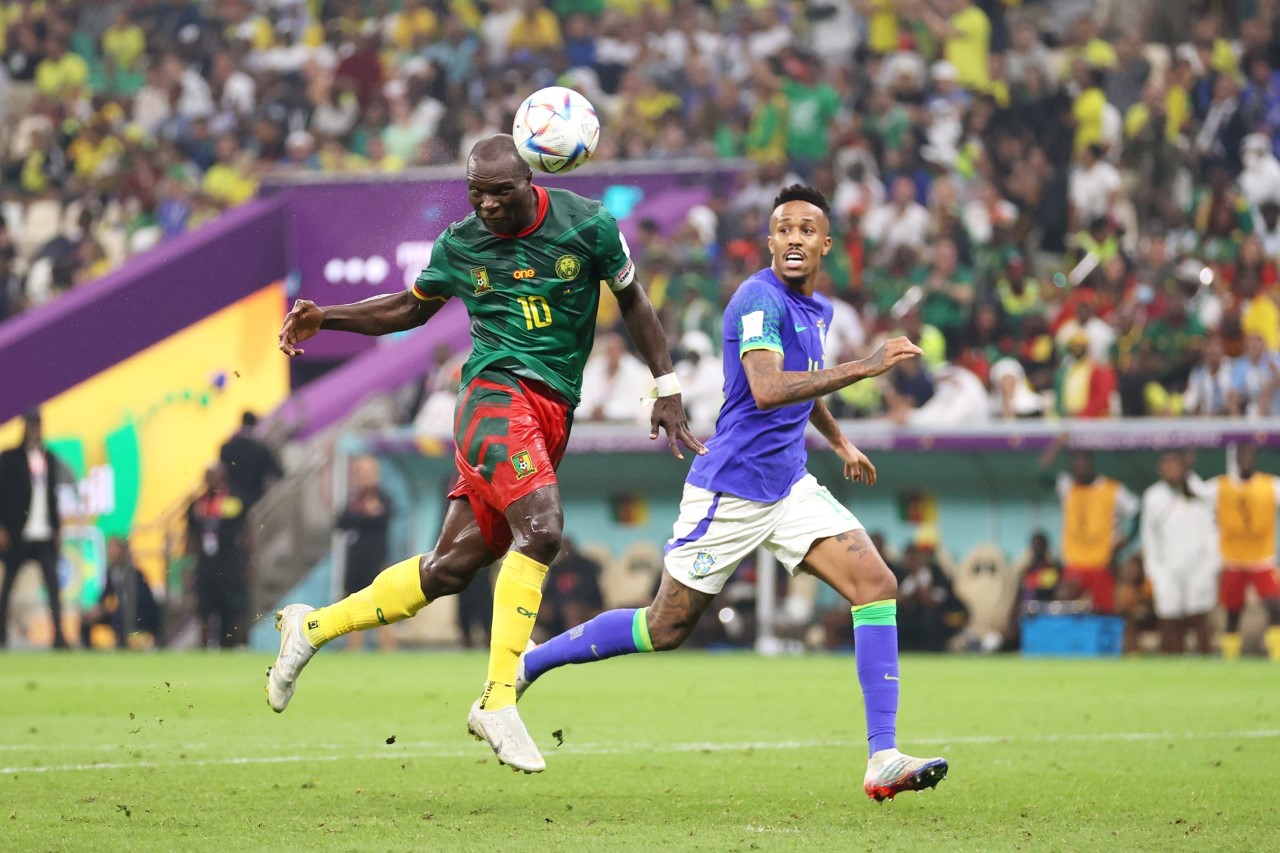 Despite the defeat, Brazil still finished first in Group H with six points, the same as Switzerland, but the South American side had a better goal difference. Cameroon ended with four points and Serbia had one.

“I didn’t even realize that this was such a historic victory,” Cameroon coach Rigobert Song said. “We are one of the African countries that played the most World Cups, and now we’ve beaten Brazil.”

This will be a bittersweet moment for the Indomitable Lions who picked up their first win at the FIFA World Cup in twenty (20) years, the last time coming back in 2002. Cameroon hadn’t won any of its last nine World Cup matches, with eight losses and a draw — against Ireland in its opening game at the 2002 tournament.

“There will still be a party back in Cameroon,” Caleb Williams, a supporter of the Indomitable Lions, who watched the game at the Lusail Stadium in Qatar said after the game. The 42-year-old added that Cameroon might not have qualified but was happy the team “took out Brazil … That’s huge”.

Samuel Etoye, 31, says he is “so elated” following Cameroon’s win despite the team not advancing. “It’s Brazil … I mean how much better can it get?”

“The Head coach is the principal source of our downfall in Qatar, the first game was our key to staying long in Qatar and he failed in his vision and tactics in the game. The game against Switzerland was our easiest game and we failed to get even a draw that would have helped us to advance to the next stage of the competition,” Binsinla Desire, a supporter of the Indomitable Lions told Pan African Visions.

“It had to take injury worries for head coach Song to see that the veteran defender Nkoulou was not up to the task. Christopher Wooh’s performance in this last game has proven that he deserved a start at the beginning of this tournament. It should be a wake-up call for Rigobert Song if he stays as Head coach to always try new things. I would like to give the coach a plus for calling Jerome and Marou from the Cameroonian league. So, in all, Cameroon’s performance has been great but the tactics in the first game didn’t work.”

Man of the moment – Davis Epassy

It was a roll of the dice moment when coach Rigobert Song brought in Davis Epassy in the game against Serbia. Epassy was unexpectedly thrust into the limelight after first-choice goalkeeper Andre Onana left Cameroon’s World Cup camp after just one game following a falling out with Song.

The 29-year-old, who plays for Saudi Pro League side Abha Club, conceded three goals against Serbia in a nervy performance and he didn’t look entirely comfortable against Brazil. Despite spilling a Militao effort towards his own goal and flapping at a Guimaraes corner, Epassy also played a starring role in his country’s impressive victory.

The former OFI, Lamia and Levadiakos goalkeeper made seven saves on his way to keeping a clean sheet and faced an expected-goals-on-target figure of 1.31. The fact Epassy kept Brazil at bay justified the faith shown in him by his manager. He also became the second Indomitable Lions player at the FIFA Qatar World Cup to leave with the man of the match award, after Vincent Aboubakar had gotten Cameroon’s first against Serbia.

“We can be proud of what we’ve done tonight,” Cameroon goalkeeper Devis Epassy said. “We worked very hard. Unfortunately, though, we didn’t qualify, and that’s why we are not too happy.”

Vincent Aboubakar, the end of his World Cup career?

“He’s our captain and our leader – whether he’s on the pitch or the bench, he always sets a good example to the rest of the squad,” said Cameroon midfielder Gael Ondoua. That is a fitting description of a man who has given his all for his national side, at a time, even carrying the team on his back.

30-year-old Vincent Aboubakar, Abouchou, as he is fondly called in the Cameroonian cycle might just have played his last World Cup for the Indomitable Lions. The Al Nassr player in Saudi Arabia will be 34 years when the next World Cup comes around, though he might still be there in some shape or form, having yet not indicated that the game against Brazil will be his last for the country.

It has been a memorable FIFA World Cup for the former Coton Sports player who finished as the country’s top scorer. He scored two goals, with Castelleto, and Choupo Moting scoring one each. At the last AFCON, Aboubakar also finished as the top striker, an outstanding turnaround for the striker. 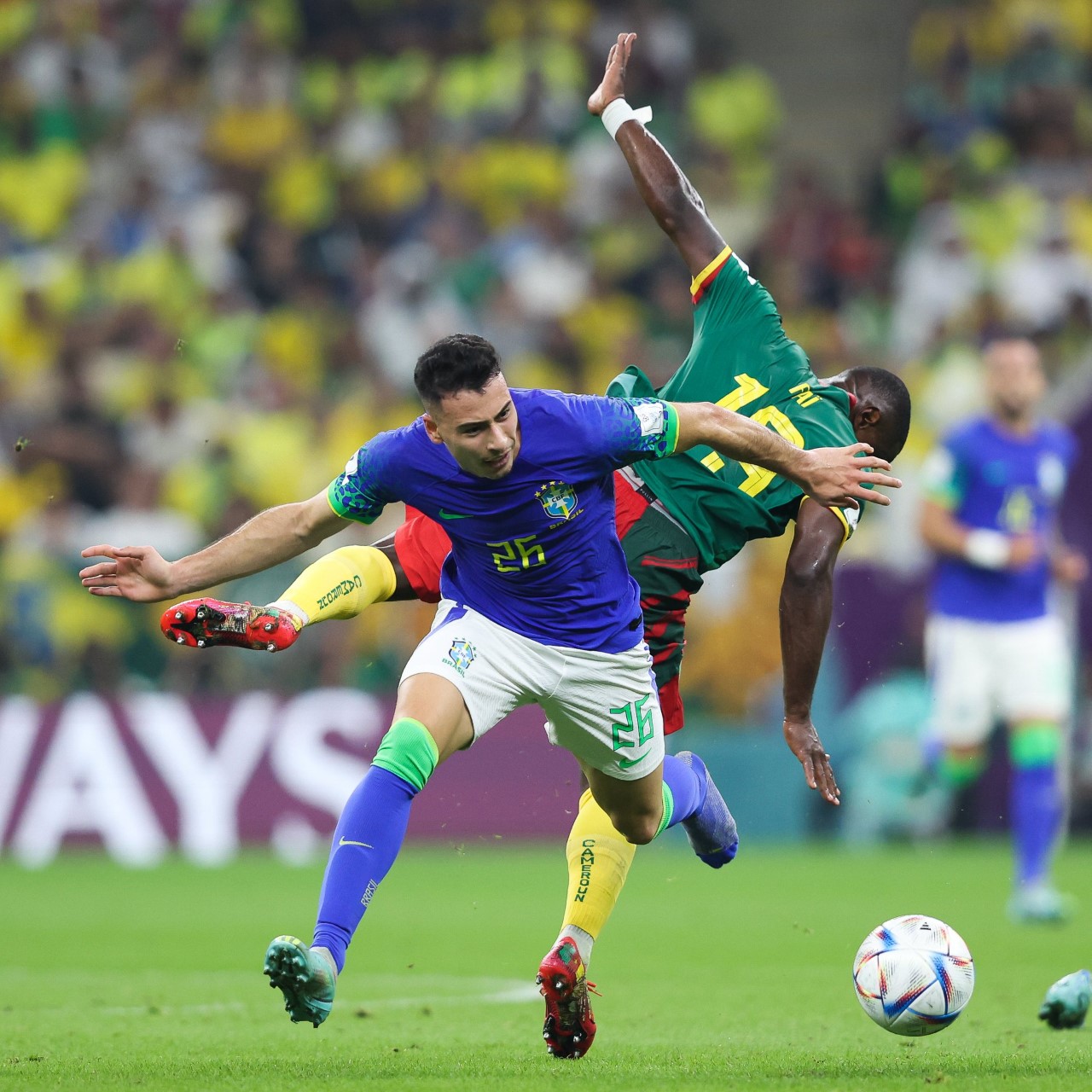 Last time out against Serbia, Vincent Aboubakar became the first substitute to both score and assist a goal in a World Cup match for an African nation. His goal involvements pulled Cameroon from 3-1 down to 3-3 just 11 minutes after he’d come off the bench.

“When the coach gave me the nod, I knew I had to make some deep runs,” explained Aboubakar. “I watched the Morocco game yesterday [2-0 win over Belgium], and they played with so much intensity. I told my teammates we had to show more desire because that’s how you win. We found that desire in the end, but we only got a draw. We need to keep that mindset for the next match.”

“I train with him every day and he does some amazing things,” continued Ondoua. “He’s a world-class player; he proved again today that he’s the leader of this team.”