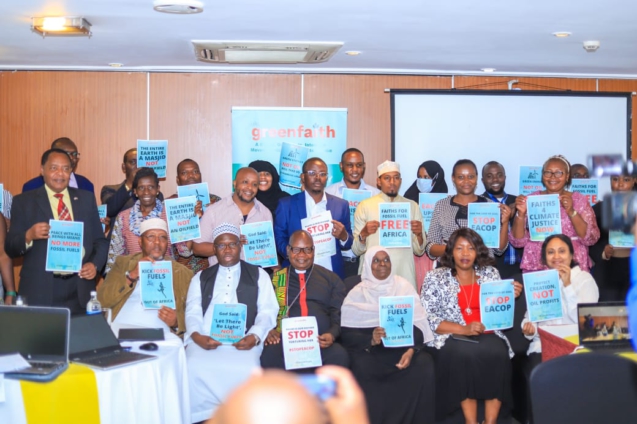 Religious leaders have called for a faster universal access to renewable energy, but one that does not lead to destruction of the environment or cause harm to the people who occupy it.

At the same time, the clerics urged African governments to reject any efforts by the Global North nations and firms to introduce new fossil fuel projects such as the East African Crude Oil Pipeline (EACOP) in the continent when the rest of the world is phasing out such.

Despite their diverse beliefs and doctrines, the clerics were united in calls for faster, and immediate just transition to renewable energy and phasing out fossil fuel projects in Africa.

“There is no justification for allowing new fossil fuel projects in Africa, or East Africa for that matter, when the alternative more renewable energy sources have not been exploited. We must instill proper and sustainable use of Earth’s resources without hurting its occupants. This way we will be fulfilling the Earth’s stewardship role assigned to us by the Creator,” said Sheikh Ibrahim Lithome of the Interreligious Council of Kenya, who gave the keynote speech.

Sheikh Lithome said faith and religious leaders, as custodians of Earth’s user manual given by the Creator, which are the different religious books and spiritual references. should lead in the condemnation of the acts by our governments who issue licenses to these corporations, giving them the direct ticket to pollute our lands, displacements of our communities and increase greenhouse gas emissions. This is our moral duty, politics aside! Fossil fuel has no place in God’s creation.

“Is Nairobi River, for instance, as clean as it was given to us by God? We have a responsibility to provide guidance on how to take care of the environment given to us by God. As religious leaders, if you cannot take action to change ills, at least use your voice. We can do the same in the case of the EACOP. Omar Elmawi, the Muslims for Human Rights Executive Director, condemned deliberate misuse of Earth’s resources as well as taking advantage of Africa’s desire to industrialize as a justification for introducing new fossil fuel projects in the continent.

He condemned EACOP, which projects to transport crude oil drilled in Uganda to Tanzania’s Tanga Port over 1,445km on a heated pipeline. “It is true East Africa wants to develop.

But at what cost? EACOP risks tripling East Africa’s carbon emissions and leaving the continent dirtier and poorer after the stakeholders cart away the profits. It is not for the good of Africa, it is for the greed of the elite, trying to line their pockets, at the expense of the planet and the community. If it were so, why should more than 1,000 families be displaced, and have their rich productive agricultural lands taken away,” he said. The faith leaders called on African governments to do due diligence before engaging in deals that will cause more harm than good to the continent’s people and biodiversity.

“Not all that glitters is gold. We must not accept anything that will adulterate the earth in the name of helping Africa to develop,” said Pastor Sam Kaloki of the Gospel Confirmation Centre.

The meeting was held with a view to add voices to calls for signing of the global Fossil Fuels Non-Proliferation Treaty (FFNPT), even as the world’s focus shifts to COP27 in Egypt in November. Tired of the losses and deaths communities have suffered in parts of Kenya, specifically in Kilifi and Garissa, Muslim faithful held day-long prayers, seeking God’s intervention to ease the pain of families losing loved ones and livestock to starvation.

“It is this notion that we are not to blame for the climate-induced water and other stresses that the religious leaders want made clear,” said Abdirizak Maalim, who came from Garissa.

“A lot of our faithful are sometimes driven to think that God is punishing them through drought or flooding, yet those most responsible for their sufferings are the developed nations that caused global warming through their fossil fuels powered development and are still starting oil and gas projects in Africa,” said Reverend Elias Otieno Agola of the Presbyterian Church. “We will support any calls to prevent new fossil fuel projects in Africa.”

A panel discussion later saw Sujarta Kotamraju of the Hindu Council of Kenya give key focus on the sacred nature of the earth, and why everyone should be its steward. “If you treat the Earth well, it will treat you the same. The reverse is also true,” she said. The sentiments were echoed by Reverend Agola, who said he grew up near River Nyando in Kenya’s Kisumu County, where they could drink and fish directly from the natural resource.

“Since humans started interfering with the river, dumping and polluting it, even the fish have disappeared and we cannot drink from the river.” Economic and Ecological Justice Programme Executive Director Dr Tinashe Gumbo said: “As we go to COP27, it is all about Justice. We, as faith leaders, believe in Justice. We must push those behind injustices causing the climate crisis to pay. The politics must be put aside, because we must live,” he said.

After Ashley Kitisia of Laudato Si Movement presented on the FFNPT, the clerics urged governments and faith leaders to acknowledge the need for a faster but just transition to renewable energy, need for green jobs, and end to new fossil fuel projects as well as immediate end to deforestation. Pastor Timothy Ghuto of the Seventh Day Adventist Church said time had come for religious leaders to guide thoughts and lead actions to save the environment, as stewards of what God gave to man.

“Initially matters of the environment were left to the government. But our people suffer, and it is clear that among other ways to help them is to enlighten them on the opportunities in a well-kept environment,” he said. Sabina Ng’ang’a from Kenya Women of Faith Network said: “Women support calls against any person that destroys the environment. This is the only thing we can leave for our children. This is why, Mr President William Ruto, we must not return to the shamba system. Dear women, let us start small, but start now, to save the environment.” For Collins Otieno of Dorcas Aid, it was a time to reflect on the loss and damage, and what faiths could do.

“We must look at local examples and be honest about the urgency of action needed to save lives. What science do you need when drought stricken people and animals in Kilifi, Marsabit and Garissa are dying, and others are being swept by floods in Uganda or Nigeria?” he posed, and added: “And did you know that there are religious organisations that invest in fossil fuels? They are part of this problem. Faith at work demands that we do what is morally right.

” The meeting ended with more to brainstorm about, as the GreenFaith Co-Director for Organizing, Meryne Warah asked: “Oil projects such as EACOP happen where indigenous communities and usually very poor people live.

But why should such a project be militarised? Who needs security between the people and resources? Africa needs to develop, but must this happen at the expense of our people, social fabrics, heritage, health or wellbeing?” Sheikh Lithome said time had come to remind the global and local leaders of their moral duty to treat the Earth and the creatures in it as sacred as they are meant to be. “It is true that Africa needs to develop, just like the global north has. But two wrongs don’t make a right. God gave us a manual for a clean earth, showing what to do with it. We have the responsibility to provide guidance to fellow human beings on how to take care of the Earth. He gave us the earth clean. We should leave it clean,” he said. 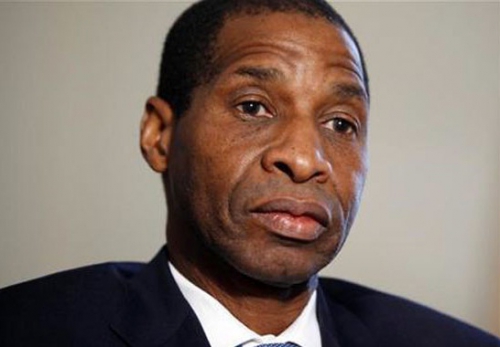