Over 71,000 members of the youth volunteer group ‘WE ARE ONE’, head quartered in South Korea, set a new Guinness World Records™ title for the most people to sign up online as blood donors within 24 hours.

‘WE ARE ONE’ that forms part of the international church organisation, Shincheonji Church of Jesus, set a goal of 70,000 blood donations in an attempt to raise awareness of the importance of donating blood. Through their “Life ON Youth ON” donation campaign, the group wanted to help alleviate the blood shortage caused by the COVID-19 pandemic worldwide.

While 71,121 volunteers registered to donate within 24 hours on 1 October this year in South Korea, more than 700 of Shincheonji’s congregation members in South Africa, Namibia and Zimbabwe also participated in this campaign. African members of the church wanted to show their unity with this noble cause.

While the majority of countries in Southern Africa have been struggling to maintain sufficient blood stock levels since the pandemic started, most national blood agencies welcomed this initiative taken by ‘WE ARE ONE’ and Shincheonji.

According to a report published by the World Health Organisation in June 2022, shortages of blood have impacted all countries during and since the COVID-19 pandemic started.

Through ‘Red Connect’, the official blood donation smartphone application developed for the Korean Red Cross, all the volunteers registered online within 24 hours to donate blood. This is almost seven times the previous world record of 10,217 (8 hours) held by India.

Junsu Hong, the head of ‘WE ARE ONE’ said, “It was possible to achieve our goal not only because of the volunteers, but also the Korean Red Cross officials working at the forefront to solve the blood shortage, and the IT company that developed an efficient blood donation application system.”

In South Korea a total of 43,811 people completed their blood donation since the campaign started. The plan is to reach the goal of more than 71,000 people by November.

In Zimbabwe Kudakwashe Chidziya, Communications Officer for the National Blood Service Zimbabwe (NBSZ) said, “What the church have done is of great importance and significance. Not to us only as a blood service but to the Zimbabwean people. And we want to say thank you so much. Continue the good work and don’t stop here in Zimbabwe since you are a global church which is making a lot of impact.”

The official record is accessible on the GUINNESS WORLD RECORDS™ website. https://www.guinnessworldrecords.com/world-records/714849-most-people-to-sign-up-as-blood-donors-online-in-24-hours 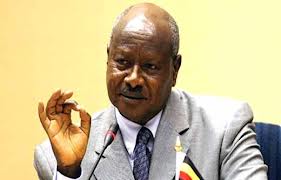 I have a duty to protect my country, says Museveni