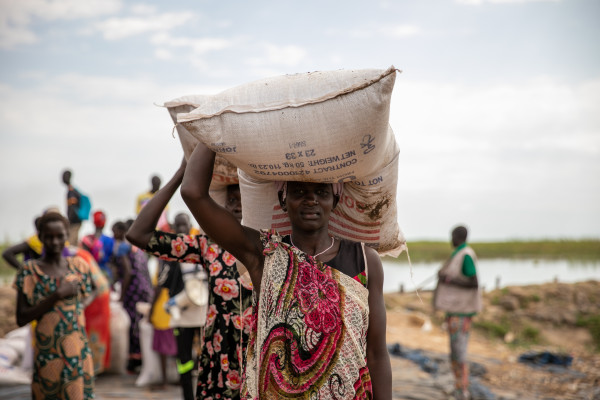 Juba, South Sudan (PAV) – A famine-like condition is unfolding in the conflict-affected parts of Upper Nile and Jonglei states due to blockade of humanitarian aid assistance, the WFP says.

The United Nations’ World Food Program on Friday said suspend its barge movement between Adok and Malakal as the waterways have become inaccessible, due to worsening security situation in areas along the White Nile, a major pathway of aid supply.

“It is completely unacceptable that we have WFP convoys carrying food assistance that can save lives but are simply unable to get through,” said Adeyinka Badejo, acting Country Director for WFP in South Sudan, in the press statement.

According to WFP, 55-60 percent of the population of Fangak and Canal/Pigi counties expected to be in emergency or famine-like conditions by now, and unable to meet their food needs

“The cost of inaction will be severe with the very real possibility of famine if we cannot access these communities immediately,” she added.

WFP, however depends on river transport to reach rural and remote communities during the rainy season, when roads become inaccessible.

A river convoy carrying 1,151 metric tons of food to communities in Fangak, Pigi, and Panyikang counties was forced to turn back after clashes between conflicting parties resumed, according to WFP.

This comes after months of sporadic fighting between formerly allied factions loyal to commanders of the now-defunct SPLM – IO Kitgwang Declaration.

The new eruption of deadly violence has killed unspecified number of civilians and displaced tens of thousands since July from Tonga and Panyikang of Upper Nile State as well as Fangak County of Jonglei State.

The WFP announced in August suspending its barge movements in Upper Nile State due to insecurity, illegal checkpoints and heavy taxation allegedly along river routes.

A week ago, the United Nations Mission in South Sudan has deployed its troops to Adidiang island site near Malakal town, following a deadly attack on a displacement camp that killed 20 civilians

Ms. Badejo urged all parties to the conflict to respect international humanitarian law and allow safe passage of humanitarian cargo.

“We are running out of time to prevent people from dying of hunger,” said Ms. Badejo.

Insider Trading And Congress: How Lawmakers Get Rich From The Stock Market