Scott Mumford, Chief Commercial Officer at Liquid Dataport, writes about how satellite internet is the lynchpin in Africa’s connectivity journey and will bridge the connectivity divide.

In a digital world, connectivity rules our lives, so the faster Africa becomes connected, the stronger and more competitive this continent will be on the world economic stage. Unfortunately, the African connectivity journey seems like all eyes fixate Only on underground broadband infrastructure. Still, I believe people should start looking beyond the stratosphere as the true hero of connectivity orbits the earth, bringing accessible connectivity to millions of people for the last two decades.

I’m talking, of course, about satellites. So many of us tend to forget satellites’ fundamental role in our digitally connected world. Yet, many more don’t understand the role that satellite connectivity will play in the future. If you don’t believe me, ask the world’s foremost famous tech billionaires like Elon Musk and Jeff Bezos. They are using their empires to build satellite internet networks that aim to revolutionise connectivity as we know it.

The orbiting truth is that satellites have been the underlying driving technology in telecoms worldwide – especially across the African landscape – for the last 60 years. They keep our GPS devices working. They have provided access to television for many people across the globe. Since 2003, satellites have brought internet connectivity to consumers in even the most rural and remote locales.

Satellites are the key to bridging the connection gap

As part of the largest independent network provider in emerging markets globally, we passionately believe that all Africans on the continent have the right to access internet connectivity. Keeping this belief at the core of our business, Liquid has not only built the largest independent fibre network in Africa but has also invested extensively in award-winning VSAT Broadband and Satellite services.

Despite the continent’s size, every business and individual in Africa can be easily connected to the internet. Through these satellite services, we will bridge the connectivity divide. With over 1.1 billion people calling sub-Saharan Africa home, the bulk of the difference can be connected through a direct satellite link with minimal infrastructure requirements.

Cost is often cited as a major barrier, and that is understandable. Any technology that requires launching a spacecraft and maintaining a spacecraft in orbit is an expensive undertaking. However, with the rising popularity of satellite technology, reusable launch vehicles and the proliferation of commercial space-based enterprises, the costs have come down astronomically.

Of course, if you live in a built-up urban environment with fibre infrastructure streaming through your streets, then you will probably win in terms of cost and speed with a land-based connection.

However, speed is less of an issue as technology evolves. For instance, our offering is available in 27 countries across the continent, with South Sudan being the latest addition to our ever-expanding portfolio. The satellite offerings start at speeds of up to 50mbps, but we are already close to scaling that up to 100mbps. It won’t be long before that capacity is increased further, with exponential gains in service offerings.

So, land connections may be preferable, but if we want this continent to thrive, and we really do, then we need to look to the skies to provide as much connectivity as possible, linking Africa with Africa and then Africa to the world.

Some may say that latency is an issue, but we have already solved that problem by building our infrastructure directly on the continent. We do this through teleports. Liquid has already installed two on African soil, linking to the continent’s terrestrial fibre network.

By investing in this infrastructure on the continent, we localise the industry and give satellite connectivity a far wider reach, speed, and lower latency than it has ever experienced before in Africa.

Satellites, infrastructure, and handshakes will connect all of Africa

Investing in the continent is challenging but a worthy struggle on the road to an economic renaissance that can only come when more people are connected. This is naturally a complex task with 54 countries and as many rules and regulations. However, this is a challenge for connectivity expansion across the spectrum, whether underground or orbiting the earth.

Through the right partnerships and engagements with government, industry, and civil society, we will navigate this terrain, ideally ending with a blanket approach that adopts the same best practice around regulations that will enable digital inclusion for the continent’s good.

But for the moment, we press on. Through our local satellite and broadband infrastructure, we can use geotagging and deployed networks to map out areas in Africa that are not connected to any ground infrastructure. Moreover, the ability to tie satellite and fibre gives us the advantage of providing ubiquitous connectivity on the continent. Africa’s time is here, and we should look to the sky with a new appreciation for the technology that connects us all.

Malawi: Parliament Okays Extension Of Retirement Age For Judges To 70 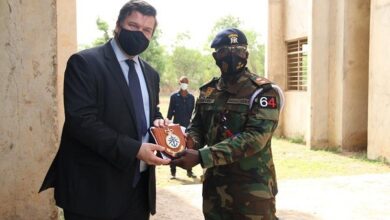