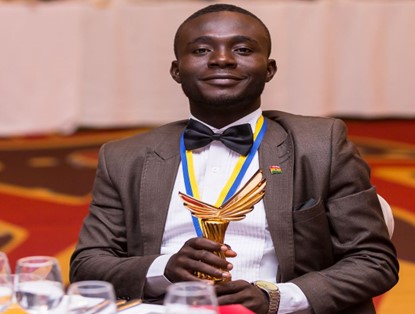 Kingsley Kwaku Pinkrah is multiple award-winning social entrepreneur and the President and CEO of the Community and Entrepreneurial Development Initiative (CEDI) Ghana. Youth unemployment in Ghana has been one of the problems facing governments over the years, and that issue continues to kill the dreams of the youth after school.

Ghana’s unemployment rate hit 13.4 percent in 2021, up from 6 percent in 2010, according to official data. The data released by the Ghana Statistical Service, as part of its data dissemination following the 2021 population and housing census, has shown that 32.8 percent of Ghanaians aged 15 to 24 are unemployed. Samuel Kobina Annim, a government statistician, said the country needed to remedy growing youth unemployment given its impact on inflation, interest rates, and economic output.

He added that policy dialogue among stakeholders is required to assess the causes of rising unemployment and fashion the necessary policy proposals to turn the situation around. In November, Ghana’s Finance Minister, Kenneth Ofori-Atta, disclosed that the government’s post-COVID-19 economic revitalization program was geared toward growing productive sectors to create enough jobs for young people.

On the back of that, Kingsley Kwaku Pinkrah, the young CEO of Community and Entrepreneurial Development Initiative (CEDI Ghana), signed a Memorandum of Understanding (MOU) with Queen’s University, Leadogo Incorporated in Canada, and JACCD Design Institute Africa to create thousands of jobs for the youth in Ghana. The MOU was signed on Friday, June 24, 2022.

This project, dubbed “Entrepreneurship Jobs for All” (E-Jobs4All), will set the youth up to build and grow their businesses. It will provide free entrepreneurship online and in-person tuition, an exchange program, and advisory services from Queen’s University faculty members, alumni, and Canadian business experts in the Leadogo Incorporated network.

Concurrently, JACCD Design Institute Africa in Accra will host the in-person training. It is hoped that the future entrepreneurs and their businesses will form the nucleus of a modern private sector that acts as an engine for job creation in Ghana.

Speaking at the ceremony, Professor Mohamad Abou Hamia, a former UN Senior Economic Advisor, pledged his support for this project. “Today’s signing of the MoU comes at a perfect time; the world has not fully recovered from the negative consequences of the terrible pandemic that hit us in early 2020. This has led to the ongoing rise in global inflation rates, which will soon be followed by a severe recession, and millions of people could lose their jobs, especially in developing countries, “he shared.

Honorable Bright Wireko Brobbey, the Deputy Minister for Employment and Labour Relations, also speaking at the ceremony, thanked the partners for this project, which he said: “will equip the youth with the requisite technical and entrepreneurial skills to complement the government’s job creation efforts”.

He further stated that the importance of this intervention and the relevance of the project can not be overemphasized. “This is because the Ghana Statistical Service estimates that the formal senatorial system was unable to generate enough jobs to absorb the growing labor force in the Seventh Round of the Ghana Living Standards Survey (GLSS 7).”

This means that a large proportion of the population would have to be guided into the informal sector, which already employs about 85% of the labor force. Thus, he concluded that beneficiaries of the E-Jobs4All Project would need to be supported to create more employment opportunities to absorb the growing labor force both in the formal and informal sectors of the economy.

The partners, Professor Greg Bavington, Executive Director of Queen’s University Dunin-Deshpande Queen’s Innovation Centre in Canada, Mr. Matt Hawskley, Chief Executive Officer of Leadogo Incorporated in Canada, and Madam Joyce Ababio, President of JACCD Design Institute Africa, were delighted with this great partnership which will offer opportunities for young people interested in owning their own business. It is expected that the project will be launched soon, after which the application portal will be open for interested youth to apply.

CEDI Ghana is a non-profit organization that addresses poverty and youth unemployment. CEDI helps young people start and grow their businesses by providing entrepreneurship training, mentorship, and funding. It is the lead partner in recruiting and running this project.

Queen’s University is a public research university in Kingston, Ontario, Canada. It is the best university in Canada and the 5th and 7th best in the world according to the 2021-and 2022-Times Higher Education Impact Rankings. The Dunin-Deshpande Queen’s Innovation Centre (DDQIC), on behalf of Queen’s University, will be providing training, advice, and guidance, an exchange program, and others.
Leadogo Incorporated is a group of Canadian business experts who will provide online advisory and mentoring aid to Ghanaian young entrepreneurs and students as they launch and grow their businesses. Concerning the JACCD Design Institute Africa, This is West Africa and Ghana’s premier creative institution, affiliated with the University of Cape Coast. They will host the in-person training.