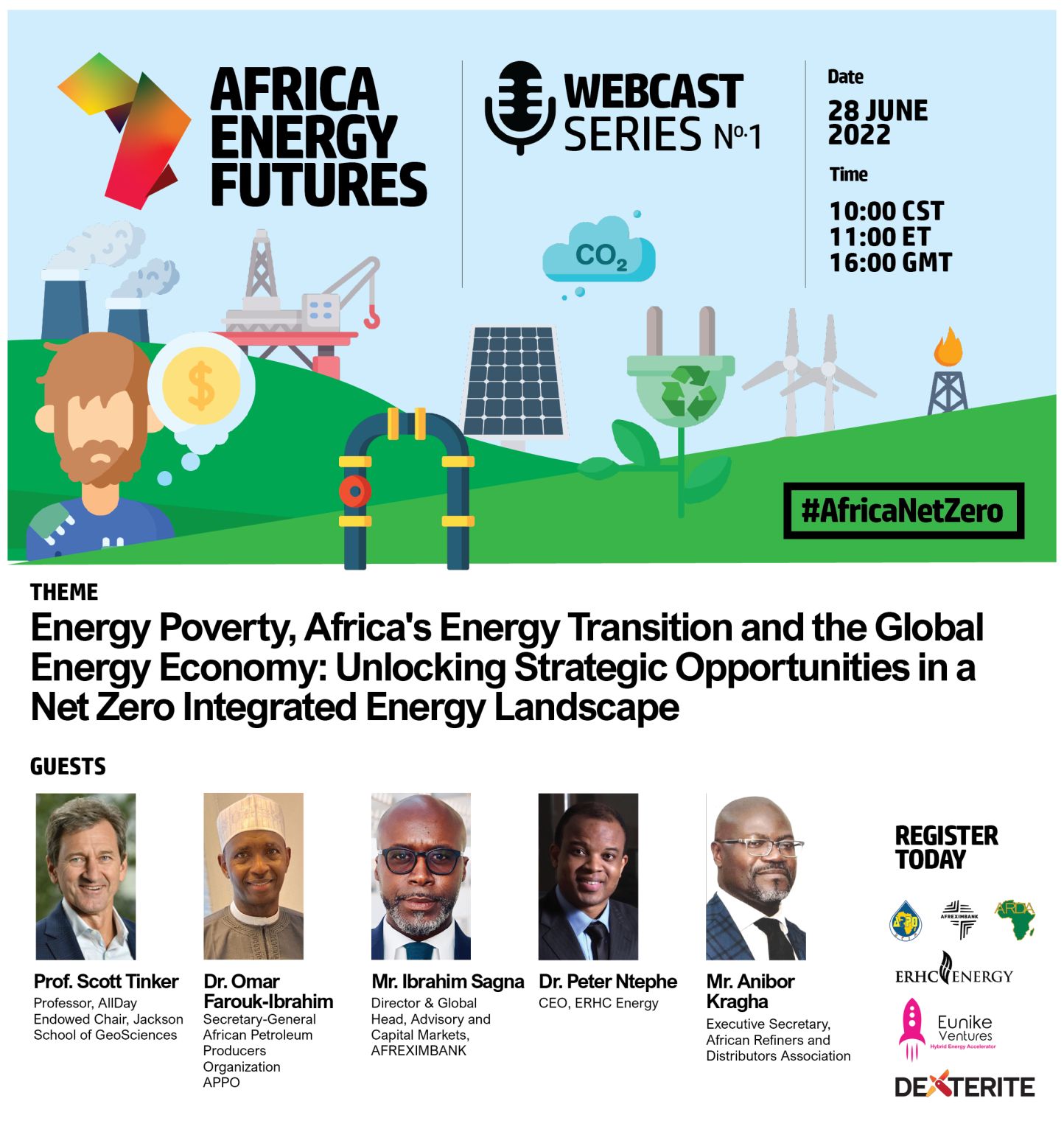 The maiden edition of the Africa Energy Futures Webcast Series will be held on June 28, 2022.

In the webinar, the panel will discuss Energy Poverty, Africa’s Energy Transition and the Global Energy Economy: unlocking strategic opportunities in a Net-zero integrated energy landscape.

Dr Omar Farouk-Ibrahim  was the Special Adviser on International Energy Relations to the Minister of State for Petroleum Resources of the Federal Republic of Nigeria before becoming Secretary-General of the African Petroleum Producers Organization (APPO) in January 2020.

On the other hand, Dr. Tinker is Director of the 250-person Bureau of Economic Geology, the State Geologist of Texas, and a professor holding the Allday Endowed Chair in the Jackson School of Geosciences at The University of Texas at Austin.

He came into the limelight when Director Harry Lynch and him coproduced and is featured in the award-winning energy documentary films Switch and Switch On.

Mr. Ibrahim Sagna holds a Bachelor’s degree and a Master of Finance from Boston College and has been sponsored by management programs at Harvard Business School and London Business School.

Before joining the bank, he worked at the African Export-Import Bank and headed the Financial Advisory Services of the Africa Finance Corporation (AFC). Mr. Sagna recently served as a board director of the Capital Markets Authority (CMA) of Rwanda and currently holds governance roles on various boards.

Under Dr. Ntephe’s leadership, the Company has more than doubled the size of acreage under its control and expanded its strategic focus to include onshore acreage, which is comparatively cheaper and less complicated to explore for hydrocarbons than deep offshore acreage.

The Company has also rapidly grown its in-house technical capabilities, enabling it to directly operate its onshore assets in a strategic shift from the previous non-operator model.

On the other hand, Mr. Anibor Kragha is currently the Executive Secretary of the African Refiners &amp; Distributors Association (ARDA). Prior to ARDA, Mr. Kragha served first as Group General Manager, Treasury and later as COO, Refining &amp; Petrochemicals at the Nigerian National Petroleum Corporation (NNPC) between September 2015 and July 2019.

Before NNPC, Mr. Kragha spent over ten years working for Mobil Producing Nigeria (MPN), an ExxonMobil affiliate, culminating in serving as Upstream Treasurer for ExxonMobil Affiliates in Nigeria from 2012 to 2015.

Africa Energy Futures Forum is a Pan-African thought leadership and strategic platform that aims to enhance advocacy and mobilize action on issues affecting the growth of regional energy markets, as well as to engage the global energy community to deepen engagement in the African energy landscape.

Under Attack, AEC Vows To Continue With Fight For African Energy Independence