The parliamentary standing committee on administration and local government (PSCAL) has tasked land office, Mvomero district council in Morogoro region to complete the preparation of certificates of land ownership to Melela villagers since the formalization process has been done over 5 years ago but not yet handed over them.PSCAL’s chairman, Abdallah Chaurembo made a call yesterday, during the property and Business Formalization Program ( MKURABITA ) projects’ inspection at Melela village, Mvomero district council in Morogoro region. A function accompanied by handing over land certificates of land ownership to ten residents.Residents received certificates namely, Laurency Remy Mdede, Seleman Hassani Uzengo , Cesilia Adrian Gaitani, Hamis Ramadhani, Rashidi Ally Minyasi, Dotto Salumu Mramba, Amina Rajabu Mazege, and Helena Steven MadanhaPSCAL’s inspection team included Members of parliament from Zanzibar island, Mpanda,Hai,Mbulu,Wingwi,Ulambo,Ulyankuru, southern Unguja, Mtwara, Kibaha rular ,Mikumi, Mbagala and Geita town.Chaurembo’s statement came after MKURABITA’s success in improving the life standard of Melela villagers, since from 2012 has located 47million,Tanzanian shillings to the construction of land laboratory records.‘’ it doesn’t make sense six regime under Samia Suluhu Hassani allocated funds to MKURABITA but the district authority delays using it effectively in solving people’s problems. Our inspection tour was stimulated by the5th National Economic Empowerment Council ( NEEC ) exhibition where  MKURABITA was among of programs scheduled to inspect ‘’he revealed.For that delay, PSCAL gives the land office two weeks as grace time to prepare the remaining land certificates for Melela residents since one of NEEC’s objectives is to assist non guaranteeing smallholder farmers or entrepreneurs access to loans.‘’ 6th regime targets to empower the small holder farmers who were not guaranteed at financial institutions, hence fastening the registration of land certificates that will be a fixed asset for an individual who wants to loan. Delaying it is against with 6th regime’s regime ‘’he added.For his part, Morogoro region commissioner, Martine Shigela ordered Mvomero land officers to submit all documents at his office on Monday so as to sort out who’s right to be given and why the process of handing over took time.‘’ I promise cooperation on solving it because MKURABITA has solved many problems in my region such as wild animals attacking villagers farmers situation created death and hunger. I’ve promised to have a table discussion with the game reserve institution to see on how to tackle the problem.’’he said. For her part, Mvomero district commissioner, ( DC ) Halima Okash , promised a follow-up within two weeks because a six regime has allocated over 10 trillion Tanzanian shillings in water projects, 8.6 billion Tanzanian shillings in the education sector, and 2.2 trillion is the health sector.‘’ Mvomero district council together with regional authority will work for hand by hand to solve it within days mentioned. I really appreciate Samia’s regime because have seen her support my district‘’ she promised. MKURABITA’s program coordinator, CPA, Dr .Seraphia Mgembe congratulated the six regime because allocated enough funds to complete the construction of land laboratory records whereas the past regime funded a little situation associated with the delay of the project.‘’ apart from MKURABITA’s support, I congratulated village government for their support in the construction of office foundation, materials like blocks and labor service. ‘’ she revealed.Denis Londo, a member of parliament in Mikumi constituency called for the government not to repeat the mistake of the land formalization process after residential area construction, he insisted residents schedule strategic plans to do with loans otherwise will use land certificates as loan guarantee negatively. Anna Ommary , said land certificate is a key to opening new life since will be able to utilize her land in agriculture through loaning. I have a dream to increase acres of maize cultivation but I failed due to financial constraints, she said 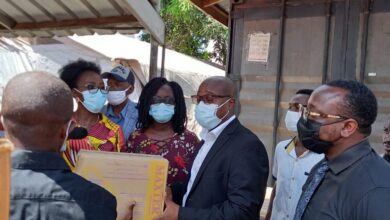