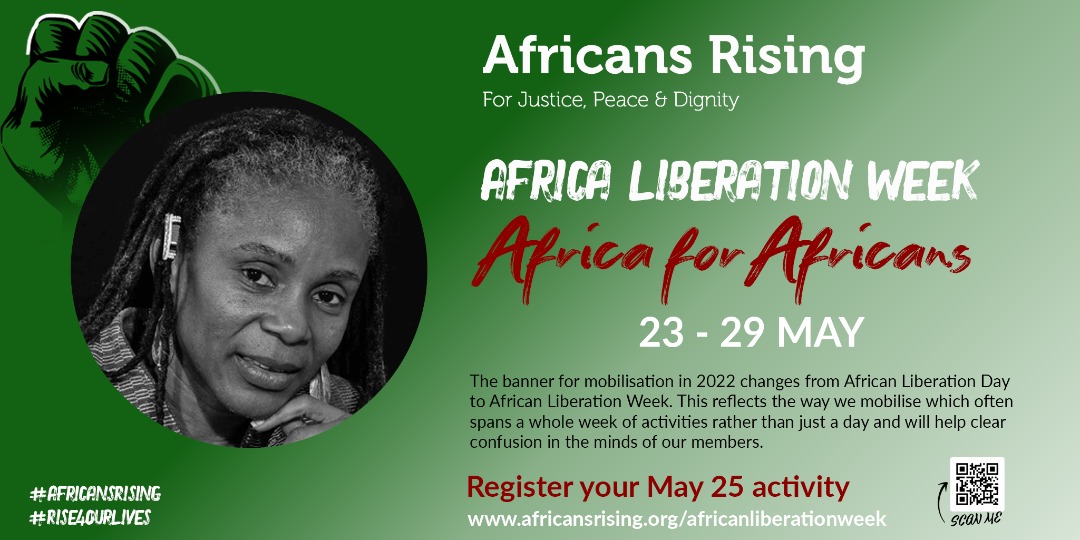 Africans Rising for Justice, Peace and Dignity, a Pan-African movement of over 30 000 people and organizations working for justice, peace and dignity for all Africans wherever they live, has declared that the week from May 23 to 29, 2022 has been declared as African Liberation Week and will promote celebrations across the continent with mobilization under a broad theme “Africa for Africans” which captures the need for unity and ownership in facing African struggles.

According to the Africans Rising media department, the commemorations will be accompanied by sub-themes which allow for focus on key areas and currents for mobilization in 2022, which include Decolonization focusing on capturing the unfinished business of decolonization, Gender justice to ensure gender equality in carving Africa We Want, Health for equitable access to quality healthcare amid COVID-19, Climate and Environmental Justice to advance the push for climate and environmental justice towards the #AfricaWeWant.

Foundation of the OAU

Also, according to the media team at Africans Rising, African Liberation Day is an annual commemoration of the foundation of the Organization of African Unity OAU), now the African Union, formed on May 25, 1963.

The day is recognized to promote unity and solidarity among African people and states. It is also    the anniversary of the launch of Africans Rising on May 25, 2017.

In the past it is reported that the Africans Rising movement has used the week of African Liberation Day from May 25 to recognize issues of illicit financial flows, slavery, and health.

Africans Rising says that it is excited to co-create activities and events across the African continent and the diaspora through the day of collective action.

It is added that while African Liberation Day takes place on May 25, any event that happens in the spirit of Pan-African unity throughout May is a welcome addition to the global mobilization.

Africans Rising also says that participants can conduct activities which may include carrying out research on African Liberation week and how or which Pan-African leaders paved the way for African Countries to gain back their Independence, share discoveries with a friend, family or a neighbour, share a picture of a historical landmark, place, traditional attire or art that represents Africa or African liberation.

According to Africans Rising, there is no one way to participate in the African Liberation Week mobilization. It is said that any activity or event that celebrates, commemorates, honours; reflects on or convenes around issues of Africa and African liberation can become part of the global day of Pan-African unity.

It is reported that participants may organize a discussion, convene online or in a local community with friends, activist networks or the public to discuss issues relevant to Africa and African liberation, write letters about issues affecting their community and deliver them to governments and other relevant institutions, start a dialogue and or research and educate the community about challenges affecting them, create a space for discussing the options and solutions for building a healthier community, share  artistic expression online or in the community of what it means to have a healthy mind, body and soul, create a short poem, opinion piece, article or a short video of oneself speaking on African Liberation Day, light a candle for one minute alone or with the community members in memory of all that have lost their lives due to the current pandemic or in the struggle for African liberation, wear a shirt with one of the Pan-African colours red, black or green during the week of African Liberation Day, take a picture and share it online with the hashtags #AfricaforAfricans, #Rise4OurLives and #AfricansRising, take a photo that captures actions for African Liberation Week and posting them on social media using the hashtags #AfricaforAfricans, #Rise4OurLives and #AfricansRising.

As a movement, Africans Rising is there to connect the work of grassroots activists and organizations.

“That is why we are encouraging anyone interested in planning their own event, however, may be fit. Our movement is here to amplify your voices, your work and your efforts to bring positive change to your communities,” Africans Rising said.

It is also reported that the broad theme: Africans for Africans   and the sub-themes  re-echoed the historical call by Marcus Garvey for Africans to unite and take ownership and control of their homeland.

In this context, “Africans” include all people of African descent wherever they may be.

It is said that the relevance of the theme in contemporary times is seen in the rush by new and old global powers upon the resources of Africa.