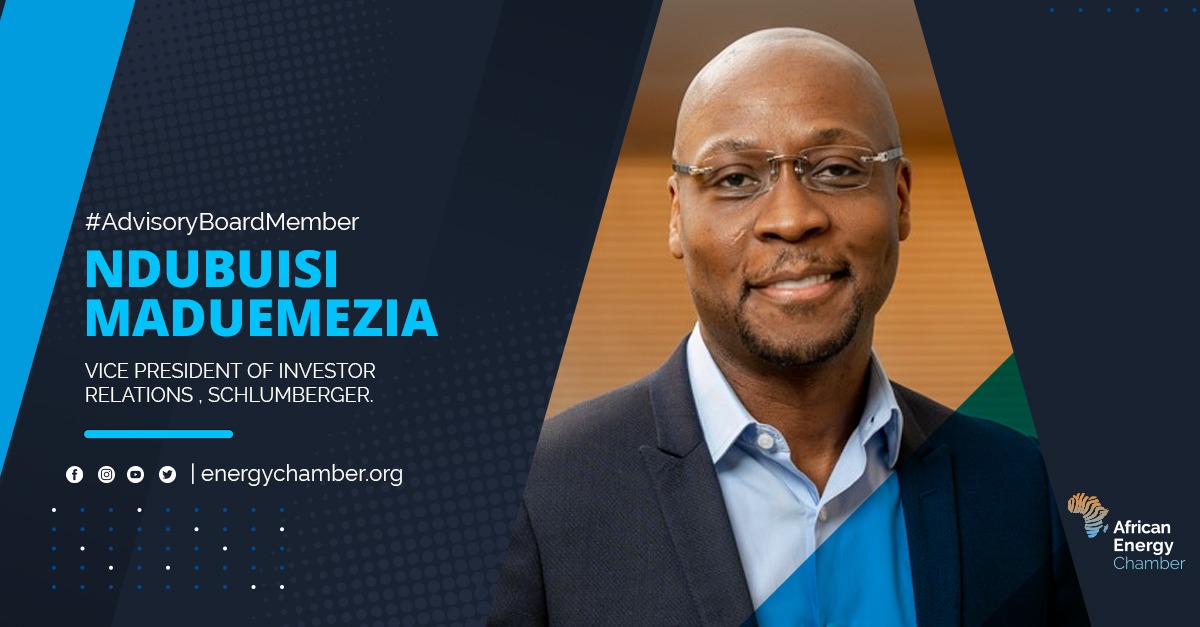 The African Energy Chamber (AEC) , the voice of the African energy sector, is proud to announce that Ndubuisi Maduemezia, Vice-President of Investor Relations at American oilfield services company, Schlumberger, has joined the AEC as a board member.  With 22 years of experience in the oil and gas sector, and a mechanical engineer by profession, the addition of Ndubuisi Maduemezia to AEC’s board will be critical in advancing the AEC’s progress in campaigning for and embarking in collaborations with global energy firms, academia, governments and investors to help accelerate the exploitation of Africa’s hydrocarbon resources to make energy poverty history across the continent by 2030.Maduemezia holds a Master of Science in Oil and Gas Management from Edinburgh Business School and a Bachelor of Science degree in mechanical engineering from the University of Lagos. Having served as an AEC’s Advisory Board Member since 2020, Maduemezia’s experience includes holding management positions regarding the drilling of hydrocarbons, reservoir characterization and production across North America, Europe, Africa, Asia, and the Middle East.Prior to his current role, Maduemezia worked as a drilling field services engineer for Schlumberger in Qatar and Indonesia before working as an operations manager for drilling and measurements in China, Korea and Japan. Maduemezia has vast experience in Nigeria, Ghana, Angola and France’s upstream markets.As a board member, Maduemezia will be a critical asset to the AEC, bringing years of experience, a vast network of global and African stakeholders and a strong commitment to advancing Africa’s energy progress.“The AEC is proud to have Ndubuisi Maduemezia as its newest board member at a critical moment when African hydrocarbon producing countries are in need of increasing exploration, drilling and production activities to be able to utilize the continent’s vast reserves to address energy poverty and fuel economic growth. Strategic and out-of-the-box thinkers such as Maduemezia are a game changer to Africa’s oil and gas market as AEC intensifies its works across the continent to help Africa realize the full potential of its energy resources,” states NJ Ayuk, Executive Chairman of AEC.*Source African Energy Chamber

Senegal Minister of Petroleum and Energies to Participate at AEW 2022 with a Strong Focus on Investment, Gas Monetization and a Just Energy Transition