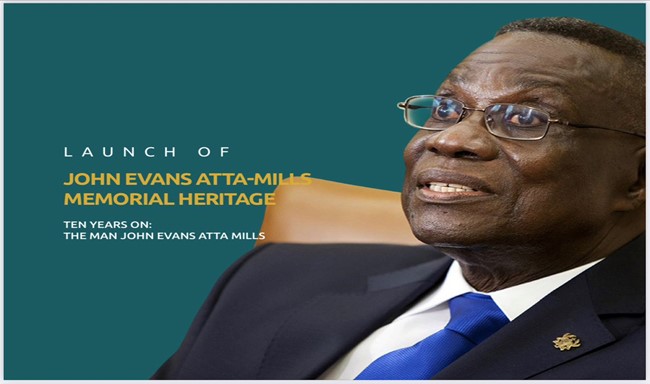 The Memorial Heritage is a non-profit, independent, non-partisan organization anchored in Professor Mills’ passion and commitment to inclusivity, transparency, accountability and his relentless quest for peace and a better society.

His Excellency Professor John Evans Atta Mills, President of the Republic of Ghana from January 07, 2008 to July 24, 2012 was born in Tarkwa on July 21, 1944. He attended Achimota School and the University of Ghana, Legon where he studied Law.

Professor John Evans Atta Mills graduated from the Faculty of Law with a Bachelor of Laws in 1967 and proceeded to the London School of Economics and Political Science (LSE) where he was awarded a Master’s degree, an LLM, in 1968.

The late President John Evans Atta Mills earned his PhD from the School of Oriental and African Studies (SOAS) of the University of London. While pursuing the PhD Programme which he completed at age 27, he was selected a Fullbright Scholar at the Stanford Law School in the U.S.A. He returned to Ghana after earning his PhD in 1971 to lecture at the Faculty of Law of the University of Ghana, Legon for the next 25 years.

At the time of his death in 2012, he was the world’s only Fullbright Scholar to have been elected Head of State. President Atta Mills was a servant leader, and an ardent lover of sports. His well-known specialties were sports, taxation and law.

The Governing Board of the JEAM Memorial Heritage chaired by Deputy Chief of Staff during the Mills’ administration, Alex Segbefia, introduced the former President of Ghana and Vice President to President John Evans Atta Mills John Dramani Mahama of formally launches the JEAM Heritage.

Senior Economist and Elder Statesman, Mr. Kwame Pianim, delivered the main speech at the Launch. The theme for the Launch was, ‘The man John Evans Atta Mills – 10 years on.’

He used the platform to urge Ghanaians to remain patriotic and to emulate the moral values so cherished by the celebrated late President. He also challenged legal educationists to train the next sets of lawyers and politicians to with a sense of unity, integrity and service to country.

There were thematic presentations by former President of the International Criminal Court, Professor Akua Kuenyehia, the Hague, Professor Francis Dodoo, a former Pro-Vice Chancellor of University of Ghana and four-time Olympian who recounted his sporting days under the coaching and leadership of the late President and Atta Mills’ desire for Youth and Sports Development, and Dr. Esther Ofei-Aboagye, a former Director of the Institute of Local Government Studies who spoke on “ Professor John Evans Atta Mills, Good Governance and Servant Leadership”.

The unveiled the logo of the Heritage had the colors green, gold and white to represent all the values and morals associated with the character of his Excellency. The launch was chaired by Nana Kobina Nketsia V, Paramount Chief of the Essikado Traditional Area in the Western Region.

The late President had a strong sense of compassion and his kindness was unmatched. Though the President of Ghana, he never lost his touch of his humanity. He was bestowed the title “Asomdwehene” (King of Peace), for his calm nature and for always looking to create an atmosphere conducive for all too peacefully co-exist.