DAKAR, Senegal, 21 March, 2022-/African Media Agency (AMA)/- Drinking water, decent toilets and good hygiene practices are basic and essential elements for all. These elements unfortunately remain theoretical especially in 2022; more so in Africa where only one in four Africans has access to a safe source of drinking water, with more than 200 million people not having access to toilets and more than 80% of human excreta being discharged into the environment without treatment.

Access to safe drinking water and sanitation are both a fundamental human right recognised by the United Nations and amplified by Goal 6 of the United Nations Sustainable Development Goals (SDGs).The role of advocacy is therefore key to holding governments accountable and driving their policies, by raising sanitation visibility and in highlighting four key and active components: developing partnerships, building sustainable infrastructures, funding and lastly human. Sanitation has its technical and political components but it remains fundamentally a human issue.
The current lack of coherent and inclusive national policies regarding sanitation is an active impediment to managing sanitation across the continent. Putting laws, policies and regulations in place is a first step, but it is time-consuming – and time is not in Africa’s favor.

Access to sanitation is an extremely dynamic issue for the populations of Africa. The process for improving Africa’s policies regarding access to sanitation must reflect this dynamism. The development of policies and their implementation have to occur simultaneously across the board by encouraging community participation at each level of society.

There is a long way to go and the central issue is that not all African countries have yet recognised sanitation as a fundamental human right. This creates the challenge of enforcing people’s right to sanitation in some countries. In other countries, sanitation has been ‘constitutionalised’, making its implementation that much easier. However, even when the right to sanitation is legislated, there remains the challenge of creating coherent, dynamic, up-to-date and inclusive policies. Sanitation policies are indeed complex, and African countries are at different stages of developing or implementing their policies and regulations, building infrastructures and involving the private sector.This complexity has been accentuated by weak involvement of national parliaments which ought to be controlling the process.

What needs to be done

For now, to resolve these distortions, what is important is to develop national plans, build capacity, build synergies, allocate budgets towards implementation and to reinforce advocacy work. The African Ministers’ Council for Water (AMCOW) has developed groundbreaking African Sanitation Policy Guidelines (ASPG) which can be easily tailored to each African country. With the idea of having a set of uniform guidelines for all countries having been born, parliamentarians for example, have a key role to play in monitoring government actions, and vote on appropriate laws such as budget.

ASPG provides a platform for Africa’s SDGs for sanitation to finally be met. The root cause of delay has been that sanitation is not yet fully understood within many governments, in many of which there is not so much as a ministry dedicated to sanitation. Unless governments see the potential synergy of sanitation with other sectors and the private sector, they will remain blind to the profitability inherent in sanitation.Niyel has been involved in advocacy work on sanitation since 2017 to persuade key decision makers in the national governments of Benin, Burkina Faso, Côte d’Ivoire, Mali, and Senegal. The objective of our advocacy is to work with governments to give greater priority to sanitation and increase the use of non-sewered sanitation as opposed to sewered sanitation which requires expensive infrastructure, thereby improving health, economic, and gender equality outcomes for the region’s underserved.
To do that, we are bringing for example decision makers face-to-face with communities in an open forum to answer the community’s questions and vice versa during the World Water Forum in Dakar. The point is to break down the perception of a hierarchy and instill the idea that leaders answer to their constituencies and to establish a condition of understanding as to what the government can and cannot do and the role of community. To decision-makers, these people cease to be faceless numbers, but their neighbors and people they now know.

Around the gaps on policies that are not only the responsibility of our decision makers we created a tool to test the knowledge of stakeholders on sanitation, to point out issues related to the value chain, policies and systems in place but above all to provide recommendations for better sanitation: The African Sanitation Championship. This championship is in two versions, an online more popular version called Poop Trivia and an offline version. The second edition of the offline version will be held during the World Water forum in Dakar where 6 groups of actors in the sanitation sector will compete: parliamentarians, ministries, national utilities, emptiers, young water professionals and civil society.

Following a webinar we organized with the African Network of Parliamentarians for Drinking Water, Hygiene and Sanitation around the ASPG and the role of parliamentarians to ensure their implementation, parliamentarians from Burkina Faso who attended instructed the Minister in Burkina to integrate those guidelines in a strategy on wastewater and excreta that was in development. This demonstrates the growing assertiveness parliamentarians are showing on sanitation. Building on this, we are convening a meeting of parliamentarians during the World Water Forum in Dakar to reflect on the role they play and to define future actions in ensuring the development and implementation of inclusive policies at a national level in the different countries. In this manner we aim to introduce a more nuanced national policy than the broad strokes of ASPG.

We appeal to all African governments in addition to implementing inclusive policies to ensure an enabling environment where the private sector, communities and media are fully contributing to ensuring that each African has access to safe drinking water, decent toilets and good hygiene.
Laetitia Sadiya Delaunay Badolo is responsible for the planning and delivery of advocacy and public affairs projects.

Distributed by African Media Agency on behalf of Niyel.

Africa’s Governments Can Do More to Protect Pregnant Students 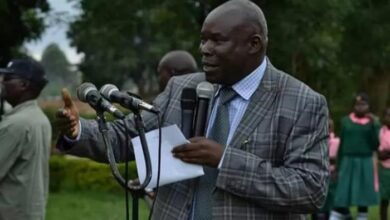