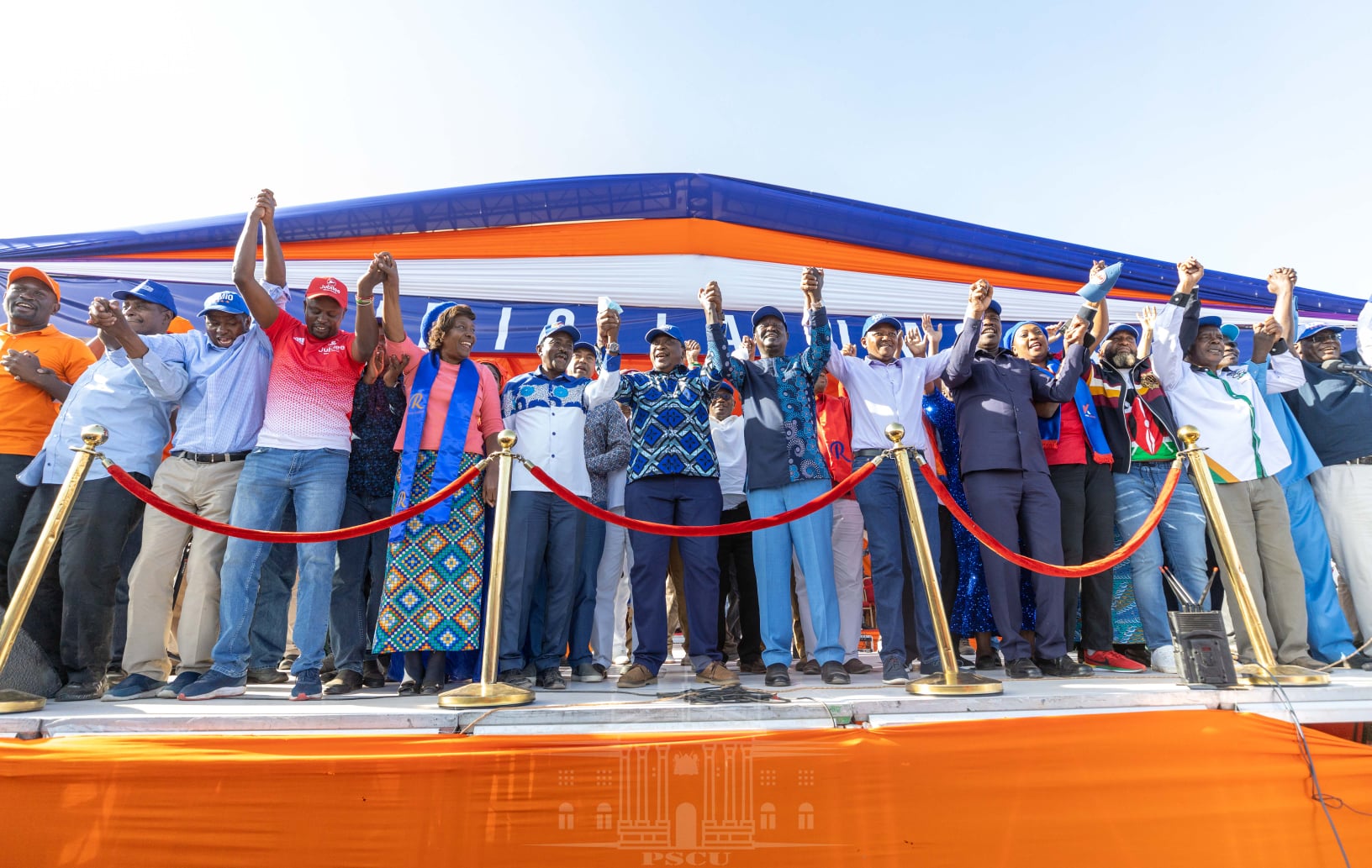 The Azimio La Umoja political coalition on Saturday unveiled ODM party leader Raila Odinga as its presidential flag bearer in the forthcoming general election.Over 20 political parties affiliated to Azimio La Umoja signed two pacts creating the coalition and endorsing Mr Odinga’s candidature respectively at the new outfit’s National Delegates Conference (NDC) held at KICC.Speaking at the NDC, President Kenyatta, who is the party leader of the ruling Jubilee Party, thanked Azimio La Umoja affiliate parties for settling on Mr Odinga as the coalition’s flag bearer in forthcoming election saying the ODM leader had what it takes to win the election.“Today we have united as delegates of different political parties and we have chosen Mr Raila Amolo Odinga unopposed as the Azimio la Umoja presidential candidate.“I have no doubt that he is capable, he has the will and God willing he will be able to ensure that our nation forges ahead in development and unity,” President Kenyatta announced.He expressed confidence that Mr Odinga will trounce his opponents in the August 9th poll giving him an opportunity to lead the country in dealing with some of its foremost challenges among them endemic corruption.The President thanked captains of Azimio La Umoja affiliated parties, led by Wiper leader Kalonzo Musyoka, for shelving their presidential ambitions for the sake of Kenya’s unity and progress, assuring that the coalition is an all-inclusive political vehicle that will take everyone onboard.“When the Government is formed, Kalonzo Musyoka, Gideon (Moi), Charity Ngilu and others will be in. We will see the representation of all those who are here because that is the only way to succeed.“We have resolved in the agreements we have signed that we will sit together with our brother (Raila), who is now our captain and brother Kalonzo and others to decide the rest of the line up that will form the Government in August,” the President revealed.In his acceptance speech, Mr Odinga thanked President Kenyatta and all political leaders under the Azimio La Umoja coalition for nominating him as their presidential flag bearer and promised to fight for victory in the general election.“Let me begin by saying I accept the nomination by Azimio La Umoja to vie for President of the Republic of Kenya in the August 9 general elections. I accept this nomination with absolute gratitude and dedication to our people, our country and all the leaders and parties that have endorsed this. You have handed me a strong, broad and unified platform to stand on and additional pairs of hands to help steady the ship,” Mr Odinga said.The former Prime Minister paid glowing tribute to President Kenyatta for his role in the crafting of the Azimio La Umoja coalition, and for working hard to unite Kenyans for the sake of harmony and national progress during his tenure. 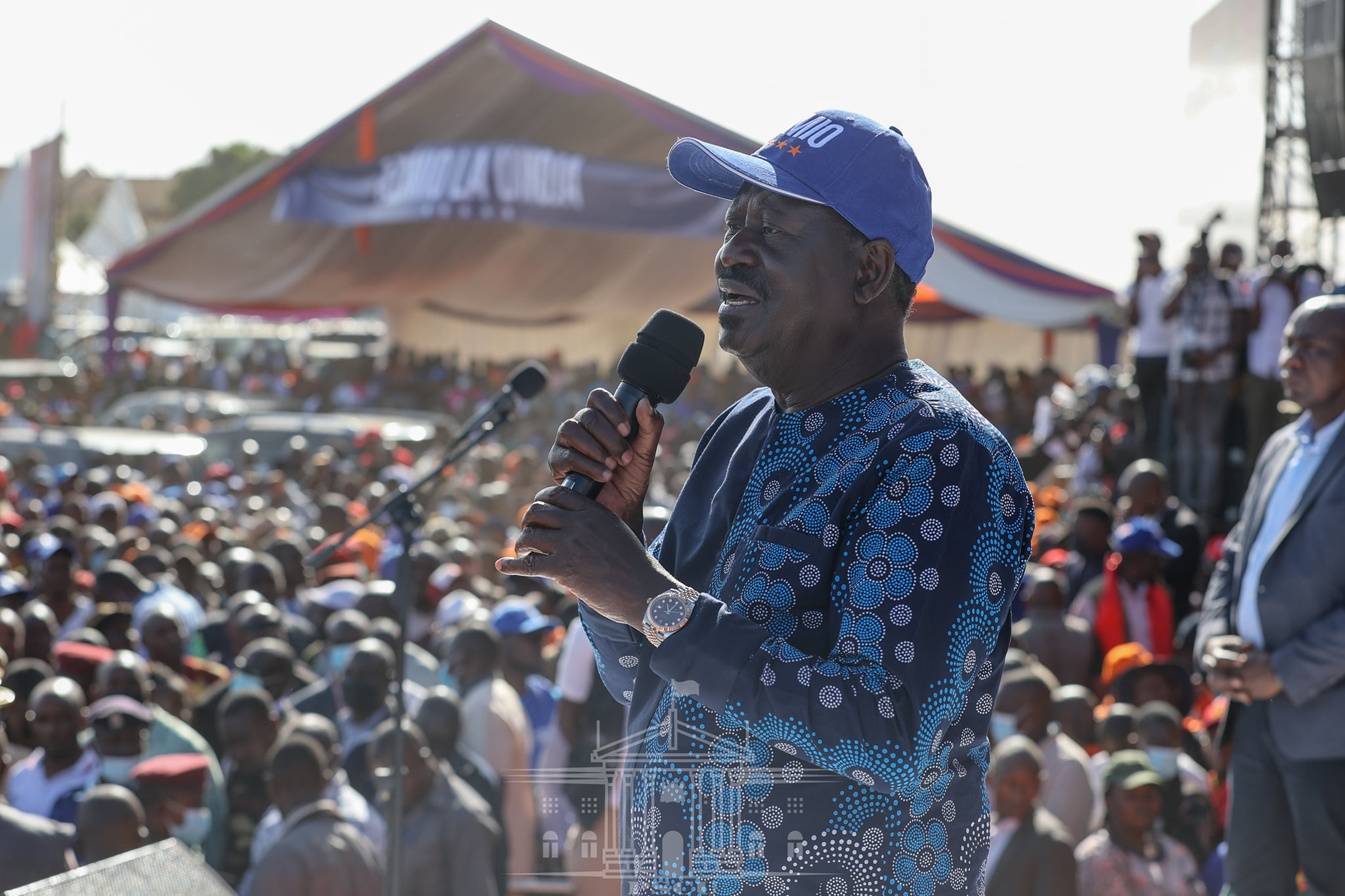 “Nobody ever imagined that parties and individuals that fought on opposite sides in 2013 and 2017 would unite. I thank my friend and brother President Uhuru for this most unlikely journey that we started four years ago and which has changed the history and politics of this country,” Mr Odinga said.If elected president, Mr Odinga promised to improve the economy, fight poverty and corruption as well as build on President Kenyatta’s legacy.“I pledge to lead an all-out war on poverty, unemployment and hopelessness in Kenya and actualise Article 43 of our Constitution which guarantees Kenyans the rights to education, health, food, water, housing and social security. No single Kenyan should ever feel forgotten in our country,” Mr Odinga promised.Later, the Azimio La Umoja brigade led by President Kenyatta and Mr Odinga addressed a mammoth political rally at Jacaranda Grounds in Embakasi East constituency where they pledged to unite and fight hard for victory in the forthcoming election.Wiper leader Kalonzo Musyoka narrated his long political association with Mr Odinga, saying he had unconditionally opted to back the ODM leader’s presidential ambition for the sake of uniting Kenyans in their fight for a fair and just society.Mr Musyoka pledged to team up with the entire Azimio La Umoja leadership in a vigorous national campaign that will lead to Mr Odinga’s election as the fifth President of the Republic of Kenya.“I thought Raila will endorse me for the presidency this time round but out of a clean heart, I will support him. I’m ready to seek for votes for Raila Odinga across the country,” Mr Musyoka said.Governors Charity Ngilu (Kitui) and Hassan Joho (Mombasa), politician Mukhisa Kituyi as well as area MP Babu Owino were among other leaders that spoke at the politically charged Jacaranda Grounds rally.*Source Presidency of the Republic of Kenya

DR Congo: 250 Ukrainian soldiers from MONUSCO will leave the country 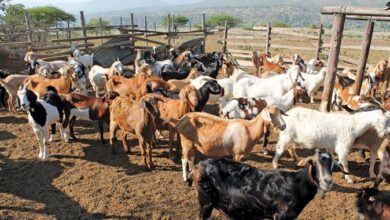