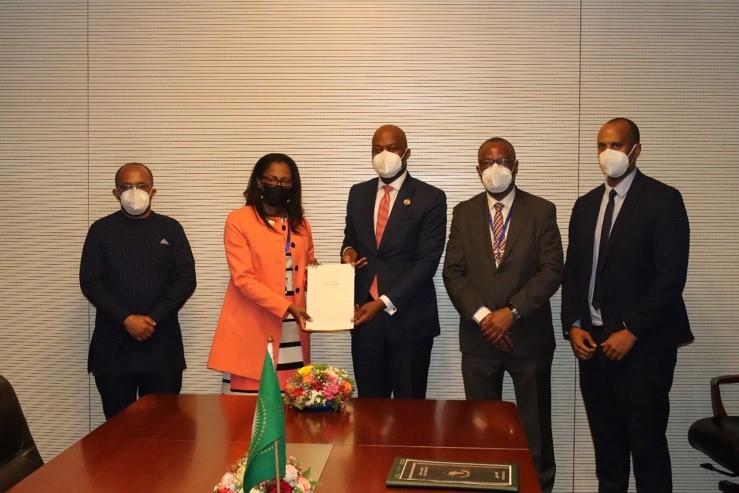 The Republic of Cabo Verde became the forty-first (41st) State Party to deposit the instrument of ratification of the Agreement Establishing the African Continental Free Trade Area (AfCFTA). On behalf of H.E. The Chairperson, the Office of the Legal Counsel received the instrument from Secretary of State of Foreign Affairs and Cooperation of Cabo Verde, Miryan Djamila Sena Vieira, Ambassador of Cabo Verde in Nigeria and ECOWAS, Belarmino Silva. The Secretary-General of the AfCFTA Secretariat, H.E. Wamkele Mene expressed his delight and welcomed Cabo Verde for becoming as State Party.

Established in 2018, the AfCFTA brings together 55 African economies, with a population of 1.3 billion and combined GDP of $3.4 trillion. Per the geographical area and number of participating countries, the AfCFTA is the largest free trade area since the establishment of the World Trade Organization (WTO). Through the AfCFTA, African countries are building a single continental market for goods and services, facilitated by movement of capital and persons, thus laying the foundation for the eventual establishment of a continental Customs Union. Other objectives of the AfCFTA include the promotion of sustainable and inclusive development, industrial development and diversification.