The construction of the gas liquefaction plant, extracted from the seabed (about 40 kilometers offshore) is the largest currently financed private investment in Africa. But, the natural gas project was suspended in March 2021 after an armed attack that left the province devastated, about 3,100 deaths and more than 817,000 residents displaced.

At the modest ceremony, President Nyusi expressed optimism at the steady return of peace and normalcy in the province, and further underscored the fact that the goal was to restart the multibillion project that would generate state revenue and offer employment to thousands of Mozambicans.

Patrick Pouyanné said that a lot of progress has already been made and I want to congratulate the Mozambican authorities who together with Rwanda and SADC [Southern African Development Community] managed to get a lot done.

A joint military force has been fighting insurgent groups in the region. “But there is still some progress to be made in order to have sustained security. We want to see the population and villages return to their normal lives,” Pouyanné stressed.

The agreement reflects the willingness to pursue its investments in Mozambique’s energy sector in order to deploy our multi-energy strategy in the country through retailing of petroleum products for mobility, the major Mozambique LNG project and accompanying supply of domestic gas, and opportunities under review in the area of renewable energies. It aims at contributing to the country’s sustainable development and give access to energy to as many people as possible.

The signed agreement with the Mozambican authorities will allow training for a group of 2,500 young people from Cabo Delgado, with a view to creating job opportunities arising from the ongoing investments. “The normalization of social life is part of security, it is not just a matter for the armed forces,” he said.

The Mozambican President, for instance, expressed deep satisfaction with the military for the high commitment towards peace and stability in the province. The Cabo Delgado province is rich in natural gas, but has been terrorized since 2017 by armed rebels, with some attacks claimed by the Islamic State extremist group.

Since July, with the military support of the Government of Rwanda, which was later joined by the Joint Standby Force from the Southern African Development Community (SADC), has increased security, recovering several areas where there was a presence of rebels, namely the town of Mocímboa da Praia, which had been seized in August 2020.

Present in Mozambique since 1991, it operates in the Exploration & Production and Marketing & Services segments. TotalEnergies Marketing Moҫambique SA is a major player in the downstream petroleum products market with a nationwide gas stations network, industrial and mining customers, lubricants and logistics.

Prior to this acquisition, TotalEnergies Marketing Moҫambique had an estimated market share of 14 %. TotalEnergies EP Mozambique Area 1 Limitada, a wholly owned subsidiary of TotalEnergies, operates Mozambique LNG with a 26.5% participating interest.

During the working visit to the region, CEO Patrick Pouyanné and Rwanda Development Board, a Rwandan public institution responsible for accelerating Rwanda’s economic development, have also signed a Memorandum of Understanding (MoU) to develop collaboration on projects related to energies.

The scope of the agreement covers the energy products distribution (including LPG, and electric charging), the supply of LPG as a substitute for burning biomass, the renewable hydro-electricity generation, the development of power storage solutions for the electrical network, the development of Natural Based Solution for carbon storage, and the implementation of education and training programs on new energies and the energy transition.

TotalEnergies said in a media release that this collaboration agreement illustrates its commitment to deploying its multi-energy strategy in Africa, particularly in Rwanda, a country with a booming economy.

Pouyanné said “we are pleased to seize this opportunity to work together with Rwanda and contribute to the development of its energy sector, in line with TotalEnergies’ ambition to become a global multi energy company.”

“The collaboration with TotalEnergies in the energy sector, particularly the investment they will make in clean energy storage, distribution, partnerships with our private sector companies in Rwanda and beyond, is timely for a country that puts the environment at the heart of its development strategies,” said Clare Akamanzi, CEO of the Rwanda Development Board.

“Additionally, the skills transfer in critical areas such as renewable energies and energy transition will undoubtedly contribute to the development of local expertise in the energy sector.” concluded Akamanzi.

TotalEnergies is a global multi-energy company that produces and markets energies: oil and biofuels, natural gas and green gases, renewables and electricity. It has approximately 105,000 employees and are committed to make energy affordable, cleaner, more reliable and accessible to as many people as possible. Active in more than 130 countries, TotalEnergies puts sustainable development in all its dimensions at the heart of its projects and operations to contribute to the well-being of people. 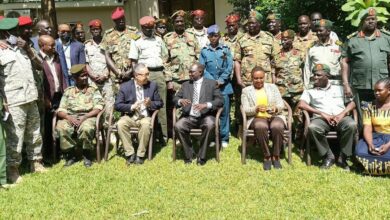