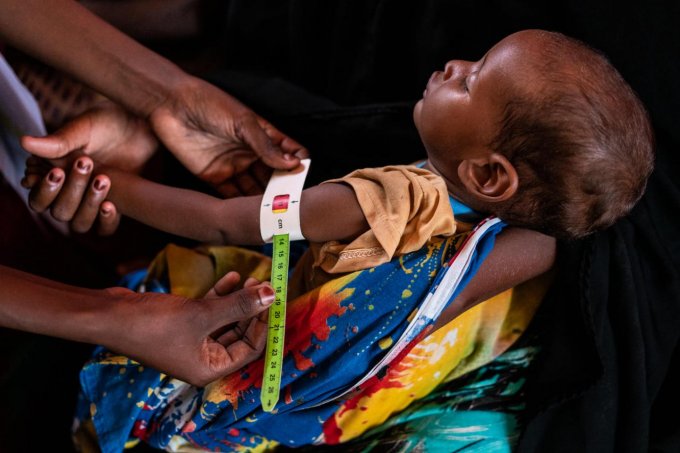 At least 1.5 million children are not receiving life-saving treatment for severe wasting in Eastern and Southern Africa, UNICEF warns today. The number represents almost half of the estimated 3.6 million children in urgent need, who are not being reached in time to save their lives or keep them from permanent development damage.Despite gradual improvement in wasting treatment outreach in the region, the impacts of the COVID-19 pandemic, combined with climate shocks and ongoing conflict, continues to push children and families to the brink. In addition, consistent shortfalls in funding remain a barrier for UNICEF’s humanitarian response.“Nothing is more devastating than seeing children suffering from severe wasting when we know it could have been prevented and treated. Thanks to the support of our donors and partners, we have reached some outstanding results and success stories; but the impacts of COVID19, climate change and conflict are creating the perfect storm where needs are quickly outpacing resources, and the time to act is now,” says Mohamed M. Fall, UNICEF Regional Director for Eastern and Southern Africa.At present, families across the region are dealing with multiple crises, including rising levels of food insecurity, economic deterioration, disease outbreaks, unprecedented cycles of floods and droughts, and conflict. Millions are having to reduce the quantity or quality of the food they eat in order to survive. In many cases, families are forced to do both.This is a looming nutrition tragedy that can – and must be averted. With unhindered access and predictable funding to reach children in need, UNICEF and partners can save the lives of nearly every child admitted for severe wasting in the region. Prevention remains the best way to ensure that children survive, avoid permanent cognitive and physical damage, and evade the life-long suffering that results from childhood malnutrition.

The situation in the region remains dire and any disruptions to an already stretched humanitarian operation, could further aggravate what is already a long-running nutrition crisis.UNICEF is asking for US$255 million to scale up its emergency nutrition response in priority countries in Eastern and Southern Africa in 2022, and support children with adequate and life- saving nutrition services, including treatment for severe wasting.*Source UNICEF Eastern and Southern Africa

Bashir Abdulkadir Mohamed ‘Suuleey’: Youth as a Cornerstone of Peacebuilding in Galkayo

BREXIT—WHAT DOES IT REALLY MEAN FOR AFRICA?