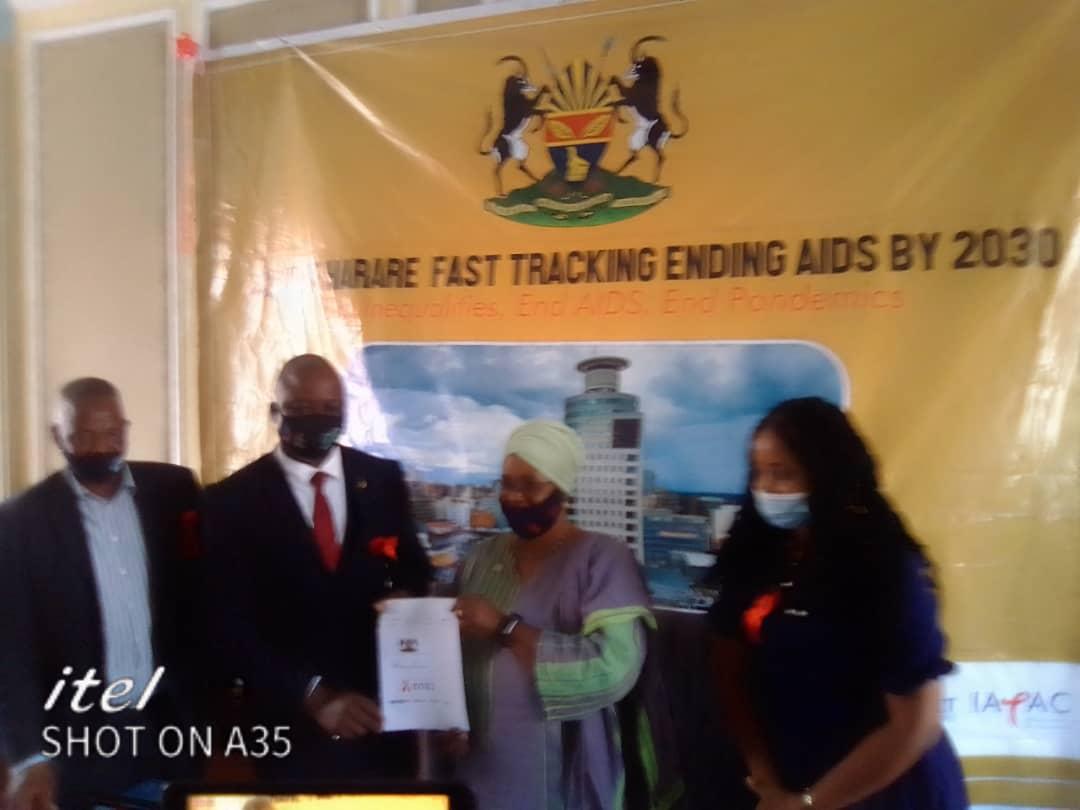 HARARE-Zimbabwe is reported to be closer than ever in its history on global HIV epidemic control targets, according to Dr Owen Mugurungi, Director in the AIDS and TB unit in the Ministry of Health and Child Care.

In a speech read on his behalf by Dr Tsitsi Apollo,Deputy Director, HIV/AIDS and STIs in the ministry of Health and Child Care at the occasion of the signing of the Paris Declaration by the City of Harare as a commitment to end the AIDS pandemic by 2030 on 3 December, 2021 in Harare, the country’s health ministry officials said that  global targets are used to measure success rate in HIV programming and  are the UNAIDS global targets which state that 95% of people living with HIV know their status,95% of people who know their HIV status are receiving antiretroviral therapy and that 95% of people on treatment have a suppressed viral load.

“These goals, that we once thought were so ambitious are evidently becoming more and more attainable as long as we continue to engage the appropriate strategies, with the right level of resources,” Dr Apollo said.

She said on behalf of Dr Mugurungi that this involves using rights-based approaches to reach people who need the HIV services and focus the programmes in locations and among population groups where they can have the greatest impact.

According to the latest Zimbabwe Population-based HIV Impact Assessment (ZIMPHIA) 2020, 86.8% of people living with HIV in Zimbabwe now know their status.

It is added that 97% of people living with HIV are now on lifelong antiretroviral therapy (ART), which is reported to be  quite an improvement from the previous 88.4% recorded in the last ZIMPHIA.

It is added that for those on antiretroviral therapy, 90.3% of them have achieved viral load suppression, compared to 85.3% in the previous survey.

“This gives evidence of the continued work that is required at a national scale to ensure that we serve our population of people living with HIV and provide them with the client-centered services that meet their needs,” she said.

She added that there was   also a need to continue to scale up  HIV prevention efforts to prevent new infections across the country, particularly amongst  young people.

She also made a  call to  encourage and to support pregnant women so that they book early for antenatal care services and address any societal and services related barriers, including encouraging men to be meaningfully involved during the pregnancy and breastfeeding periods.

She said that men’s involvement is key to improving the health outcomes of both the mother and baby.

Dr Apollo added that exploring and scaling up technological advancement is key in for reaching those population groups that have not been accessing services.

She said that the introduction and scaling up of innovations such as HIV self-testing has helped to reach out to more men and young people who would not have  accessed the routine services and to  know their status.

She also said that with most of the country’s health facilities,  including primary care facilities now offering antiretroviral therapy services, the  care and treatment programme remains one of the key pillars in HIV programming.

It is added that in line with the World Health Organization 2019 and 2020 Guidelines, the country has adopted the use of more effective Anti-Retroviral medicines called Dolutegravir (DTG) which are safe, leading to rapid viral suppression which also do not interfere with many other medicines and also do not lead to drug resistance easily.

It is also added that Zimbabwe has been transitioning stable patients on first line to the new medicine and by August 2021, 78% of patients had been transitioned to Tenofovir, Lamivudine and Dolutegravir (TLD).

There is also work on improving viral load coverage which is reported to be key in measuring how successful people are doing on treatment.

Dr Apollo said that the country is  currently at 61% coverage for viral load testing and working closely with  partners in making sure that samples are collected twice a week from clinics to laboratories, using  mobile sms to transmit the results and also have  introduced a new campaign called ‘Flip The Script’ to drive the demand for viral load services.

Dr Apollo said that Zimbabwe remains as one of the countries with the most successful HIV programmes.

The city of Harare was urged by the ministry of Health officials at the launch to continue to work closely with its communities and to ensure client-centric approaches in HIV programming.