Parliament on Friday approved the sum of GH¢574.7 million for the implementation of the programmes and activities of the Ministry of Foreign Affairs and Regional Integration for the 2022 fiscal year.

The motion for the approval of the budget was moved by Madam Shirley Ayorkor Botchwey, the Minister of Foreign Affairs and Regional Integration.

Mr Bryan Acheampong, the Chairman of Parliament’s Committee on Foreign Affairs, said the Committee was informed that the Ministry of Foreign Affairs and Regional Integration would soon commence the issuance of biometric chip-embedded passports.

He said the Ministry proposed to undertake this project because of the security challenges it currently had with the issuance of the biometric passports.

“It is the view of the Ministry that chip-embedded passports will provide maximum security and ensure that only qualified persons hold Ghanaian passports,” he said.

“It will also bring our passport regime in line with international best standards.”

He said the Committee was informed that the project would be executed in partnership with a private company within 10 years and the total cost of rolling out the project for the first year was $23 million.

He said various experts had been engaged to undertake a thorough study of the structural integrity of the building to enable the Ministry of Foreign Affairs and Regional Integration, take a decision on the repair or otherwise of the building.

He said based on the information received from the engineers, the Ministry of Foreign Affairs and Regional Integration had decided to reconstruct the AICC at the cost of €116,384,500 with a cedi equivalent of GH¢814,691,500.

Mr Acheampong said a feasibility study made on the structure showed that the reconstruction of the AICC would be economically and technically viable if the Ministry was able to operate the reconstructed infrastructure at the indicated cost.

He said the Ministry would also achieve the projected revenue levels through efficient management of the facility within 22 years.

Mr Samuel Okudzeto Ablakwa, Member of Parliament’s Committee on Foreign Affairs, said the attention of the Committee was drawn to an expenditure of GH¢65.7 million made in the name of the Ministry of Foreign Affairs and Regional Integration on page 273 of the Budget Statement and Economic Policy of the 2021 fiscal year.

Madam Abena Osei Asare, a Deputy Minister of Finance, explained to the House that the funds were expended on the evacuation of returnees from Lebanon and other activities based on a budget, which was submitted by the Foreign Ministry to the Ministry of Finance.

“Mr Speaker these are money that went directly to various places like the hotels and the airlines as well; so they did not have the budget under them, so the Ministry of Finance had to pay to enable us to carry out the covid-19 pandemic issues that we needed to address.”

Mr Haruna Iddrisu, the Minority Leader, lauded Madam Ayorkor Botchwey for her role in ensuring that Ghana was elected to serve on the United Nations Security Council for two years (January 2022 to December 2023).

He urged the Foreign Ministry to ensure that Ghana acquires permanent office and residential facilities for its missions, to avoid high rental costs.

Madam Ayorkor Botchwey assured the House that in executing the AICC project, value for money would be done.

She informed the House that with the Oslo District Court judgment, Ghana had been fully acquitted and court costs had been awarded to the nation.

Ghana had wanted to secure a property to be used as a Chancery in Oslo, Norway, but the Government later declined to do so, which led to the property owner filing a case against the country.

US criticises Mozambique and Tanzania over counterterrorism 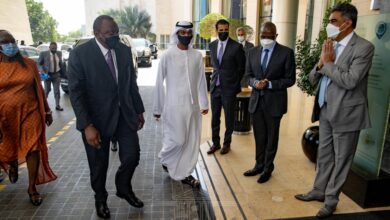