Cameroon’s Dr Christopher Fomunyoh, who is the Senior Associate and Regional Director of Central and West Africa at the National Democratic Institute (NDI) based in Washington, USA, has commended the work done by Liberia’s former President Ellen Johnson Sirleaf in her efforts to get women across the African continent to hold the highest senior managerial positions.

The  former adjunct professor of African politics and government at Georgetown University was speaking to 30 dynamic Amunjae leaders from 16 African countries during the second edition of the Amunjae Leadership Forum which took place from October 29 to 31, 2021, in Monrovia, Liberia. The event was under the theme “Building Resilience”.

The personal commitment of the former Liberian president to supporting women as agents of change, makers of peace and drivers of progress led her to establish the Ellen Johnson Sirleaf Presidential Centre for Women and Development, EJS Centre in 2018. “The EJS Centre was founded to be a catalyst for political and social change across Africa by helping unleash its most abundant latent power – its women,” Ellen Johnson Sirleaf, former president of Liberia told Dr Christopher Fomunyoh in a letter.

Dr Fomunyoh spoke to these women leaders focusing on “Developing a Personal Roadmap to Positions of Influence/Service. He further highlighted some of the challenges he has overcome in his public leadership journey and the strategies employed to forge ahead. Dr Fomunyoh also painted the importance of women’s leadership and participation in public governance.

“I am delighted that my sisters are getting together to change things to make the continent a better place. We have the resources; everybody comes to the continent to get better and richer bit look at the conditions our people live in,” Dr Christopher Fomunyoh told the women leaders.

Speaking about the former Liberian President Ellen Johnson Sirleaf, Dr Christopher Fomunyoh stated: “… Fast forward six years later she gets re-elected which is not a given on this continent; we all have seen several persons who could not serve a full term or several cases who could not serve more than one term. When she completed her term she worked hard to make sure that Liberia had a democratic transition from one democratically-elected leader to another and that is an accomplishment to this continent.”

“As if that was not enough and she was not ready to go on retirement, she launched this Amujae initiative to open doors for the next generation of women leaders across this continent. That for me is a remarkable struggle, a small slice of her accomplishments and everything that has been made about her career… For her, being president was just part of her job.”

The EJS Centre’s flagship program, the Amujae Initiative, addresses the underrepresentation of women in leadership in Africa by ensuring that women become equal partners in setting national priorities and the direction of their respective nations. The initiative identifies and challenges African women who have demonstrable potentials, bolstering their ambitions and simultaneously providing them with practical support so that they can successfully pursue and take up the highest position in public leadership. To date, the EJS Centre supports 30 exceptional women in 16 African countries who serve in various public leadership capacities including cabinet Ministers, a mayor, a governor, legislators, advisors, heads of state-owned entities and civil society leaders. 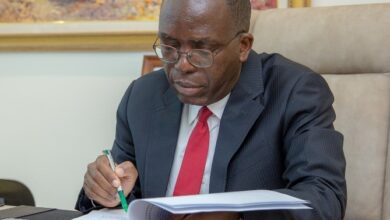