Arguments can only be cogent when definitions are the same. For this purpose, we start by making crystal clear the undefined notion. Democracy is lexically defined as a system of government by the whole population or all the eligible members of a state, typically through elected representatives. I am of the opinion that foreign democracy is rather pernicious on Africa’s emancipation and development.

The preponderance of Africans through their malleability have concurred to the erroneous philosophy that longevity in power is an epitome of anti democracy. With this misapprehension, excessive politicization and  afro pessimism  becomes inevitable. How can this continent grow when we have all become militants of bad faith because of megalomania?.  How can we come out from the shackles of economic imperialism and conditional aid if we do not work in synergy irrespective of our political chapels towards defeating our common enemy?. How can we become developed when we keep vehiculating to other continents Who are by the way our predators, that our leaders are incompetent and all they labour for is the anchoring of their hegemony.

The observation that is cardinal is the fact that countries with a monarchical form of government are far developed than those who are incarnates of foreign democracy. Look at the kingdom of Bahrain, Look at the United kingdom, look at the united Arab emirates just to name a few. Now look at Cameroon, Togo, Ivory coast and you can name the rest. Anthropological and sociological studies have it that countries like the USA and France were never developed with democracy. So while they are using democracy to maintain their already established and well anchored strong institutions, Africa is trying to use it as an emancipation catalyst. These foreigners in their nefarious Agenda served us an anti growth tablet that has infringed our development.

Africa therefore must customize foreign  democracy to their own society. This is what I call Socialist Democracy. Where we can like China, unanimously annihilate from our constitution the limits to presidential mandates. Where  we  see economic growth and social stability as more important than freedom of speech, political participation, and other democratic rights. This would only be a true reflection of Africa’s political anatomy as it is the case in many chiefdoms.

Isn’t it worthy of cogitation?.  Isn’t it indisputable that  our lucidity and sagacity after serious contemplation has diagnosed us of the malady of foreign democracy. Can’t we see that this cancer is nothing but smooks and mirros. Picture a builder Who after making the foundation of the house and elevating the walls is forced to step down because democracy wants that another builder continues. The ambitious builder fights with the old builder and wins. He in his own turn destroys the foundation of the latter and builds anew until another builder comes and repeats the sempiternal episode. This is our predicament. Is there anything like opposition party in China?. No!. Everybody is busy boosting the productivity of their economy. Is there anything like electoral hold ups in the united Arab Emirates ?. No!.

In Cameroon we have more than 300 political parties. Each of the crusaders work indefatigably to lambast the government in power until it is their own turn to have a taste of their own medicine.

At the Omega of this analysis, one has as corollary that, foreign democracy is rather  a slow down machine for Africa’s sociological, economic and political take off. Let us emulate what China is doing.

*Gabriel F. Yagaka is a Political Analyst.The views expressed are his. 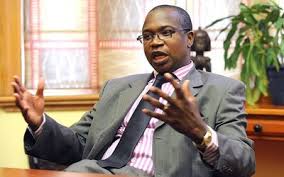