If Nigeria were to be a human, the country which gained flag Independence from British colonial rule in 1960 would have celebrated its 61st birthday on October 1. That indeed was the day and year of its separation from its former non-Independent status and the consequent attainment of flag Independence.

In his address, the President, whose second and final term in office comes to a close in 20 months, urged Nigerians to continue to keep faith with the national unity project, irrespective of the many challenges that the country was being confronted with in that regard, and most notably, in more recent times. Hear him:

‘Fellow Nigerians, the past eighteen months have been some of the most difficult periods in the history of Nigeria. Since the civil war, I doubt whether we have seen a period of more heightened challenges than what we have witnessed in this period.’

He linked the challenges to the first ‘deep recession’ that had confronted his administration, security challenges in the country and the outbreak of the COVID-19 pandemic.

On the security challenges, President Buhari reported that his administration was throwing in more boots into the field in the area of policing. At the same time, he reported that the operational and combat capacity of the Navy and Air Force was similarly being boosted.

He tasked all Nigerians to eschew any actions capable of stirring crisis and insecurity and took out time to counsel the media:

‘Our media houses and commentators must move away from just reporting irresponsible remarks to investigating the truth behind all statements and presenting the facts to readers.’

Addressing the question of the freewheeling cooperation his administration has continued to get from the National Assembly, President Buhari was effusive in his praise:

‘I salute the leadership and members of the Ninth Assembly for their patriotism, dedication to duty, candour and most importantly the dispatch with which they have enacted legacy legislations for this nation. I do not take such level of cooperation for granted and hope it continues for the overall efficiency of the Federal machinery.’

Conceding to long-expressed concerns over notably food inflation in the country, President Buhari remarked that of a truth ‘food prices have been going up.’ However, he put the blame on ‘artificial shortages created by middlemen who have been buying and hoarding these essential commodities for profiteering.’

Not many respondents however agreed with where he put the blame as they connected the challenge somewhat more fittingly with another problem he had earlier identified: insecurity.

In President Buhari’s books, he has done a lot and given his best during his time in office. So why do quite an awful lot of Nigerians not agree with his own personal scorecard. In the same address under reference, he attempts to answer this:

‘Critics misdiagnose incremental progress as stagnation. Since coming to power, this Administration has tackled our problems head-on in spite of the meagre resources. No government since 1999 has done what we have done in six years to put Nigeria back on track.’

Some of the critics Buhari is referring to here would of course include leaders of the principal opposition party, the Peoples Democratic Party, PDP.

For them, and several others, the Independence Day speech ritual ought to be more nobly addressed by Presidents in such a way that many would not be left wondering as to what indeed it had set out to achieve.

In his own remarks on the Independence process for example, Oyo State Governor, ‘Seyi Makinde went for the jugular when he pointed out that only a restructured Nigeria will help the nation regain her past glory.

Speaking directly to one of the landmark achievement points that had helped signal some 62 years ago that Nigeria was a candidate for greatness, the governor lamented that it was most disheartening that Africa’s most populous nation, which had blazed the trail and established the first television station in Africa, was now consigned to the backwater position of relying on foreign television networks if its people must receive and use clear video signals.

According to Makinde, the clamour for a restructured Nigeria was directed at making sure we regain our lost glory and reconnect with the epochal achievements recorded by the first generation leaders of Nigeria.

“We are pushing for a restructured country because when we achieved all of these firsts, the country was not over-centralised at that time. We believe that when we push through the agenda to restructure the country, we will be in a better position for people to unleash their talents, not just the local economy, but also to place us where we really belong in the comity of nations right across Africa.”

The governor was speaking at the launch of the digital broadcast channel, SATVIEW Network in Ibadan.

Makinde’s counterpart in Rivers State, the feisty Nyesom Wike was even more critical.

According to him, it was plainly regrettable that 61 years after independence, Nigeria has not only become one of the most indebted countries in the world, it was imperative at the moment to embark on far-reaching measures to rescue the country from the wrong direction it is headed.

Agreeing with his colleague in Oyo that Nigeria’s independence project had been consummated by seemingly patriotic, knowledgeable and compassionate leaders who had set out to build a united, peaceful and prosperous nation, he however lamented that it is now evident that most of the countries that were in the same league with Nigeria 61 years ago are today far more advanced.

He affirmed that it was also most worrisome that the National Assembly has abandoned its checks and balance role in relation to the executive, even as the judiciary had also  lost its sense of courage and commitment to justice.

“In the last six years, our economy has been in tatters and gasping without any realistic hopes for meaningful recovery in the nearest future.

“They, therefore, told lies when they say that our economy is growing and doing well when no one is feeling the benefits of an improving economy if any.

“Unable to mobilize sufficient domestic revenues, Nigeria is now one of the most indebted countries in the world, yet the Federal Government’s appetite for more loans remains high even as we are approaching the twilight of its tenure.

“The effect of this is to mortgage the progress and wellbeing of the future generation of Nigerians with billions of debts burden in hard currencies.”

“At independence, we were at par and even better in resource endowments and potential for development with our contemporaries like Malaysia, Singapore and several other countries.

“At independence and even now we are a nation blessed with very hard working and resourceful people.

“Our youths are some of the smartest people in the world, doing great exploits, flying our flag and making us proud across the world in music, dance, acting, culture, arts, sports, academics and our unique expressions and community ways of live.

“But at 61, it does not seem to me that there is anything worthy of our celebrating except, perhaps, the fact that we have remained independent and managed to struggle with our existence for all these years,” Wile lamented.

Back to the President’s speech. Though conceding that the past 18 months had indeed been quite tough, the President generally still came across as one who had not gotten a handle on the issues that precipitated the toughness.

While at some point in the speech he attempted to touch on some of the challenging points, including the COVID-19 pandemic and the security challenges all across the country, he however did not go much further in the view of commentators to demonstrate that his administration was now sitting atop the challenges and that better days were in the offing.

And given that this is invariably President Buhari’s final occasion to capture the national imagination in terms of commemorative speeches before the dam opens in full throttle for the medley of activities that would herald the formal beginning of succession politics in the country, there are concerns that he may very well have blown a major opportunity to speak to his legacy as a civilian president and make final amendments for perceived failings and mis-steps recorded this far.

So where lies the fault? The speech writers? The structure of government? Or the President himself? Or a bit of all of the above.

Nowhere is this most noticeable  than in the operations of the current APC-dominated National Assembly. Unlike in the first term of the Buhari presidency where there was a semblance of opposition, in the current dispensation, literally no dissenting voice is tolerated. And analysts put this at the doorstep of the current helmsmen in NASS.

The legislative analyst, Kanu Igbere is one such voice:

‘As far as I am concerned the basic problem of the National Assembly is that of leadership. I guess you will agree with me on this. Perhaps it was for this reason that there have been rumours of attempts by Senators and Honourable Members who are dissatisfied with the situation wanting to effect leadership changes in the NASS leadership.’

Asked to hazard if the nation can still expect any meaningful constitutional amendments from the current legislature, Igbere responds:

‘There is a correlation between this question and the first one. In the sense that the general public have this perception that the Senate President, who is the Chairman of the National Assembly is a lackey of the Executive branch of the Federal Government. Therefore, there is this general perception that the National Assembly will only do what the Executive will want them to do. Therefore, NASS cannot probably take an independent or an objective stance in the overall interest of the nation, especially in burning national issues such as restructuring, etc.’ 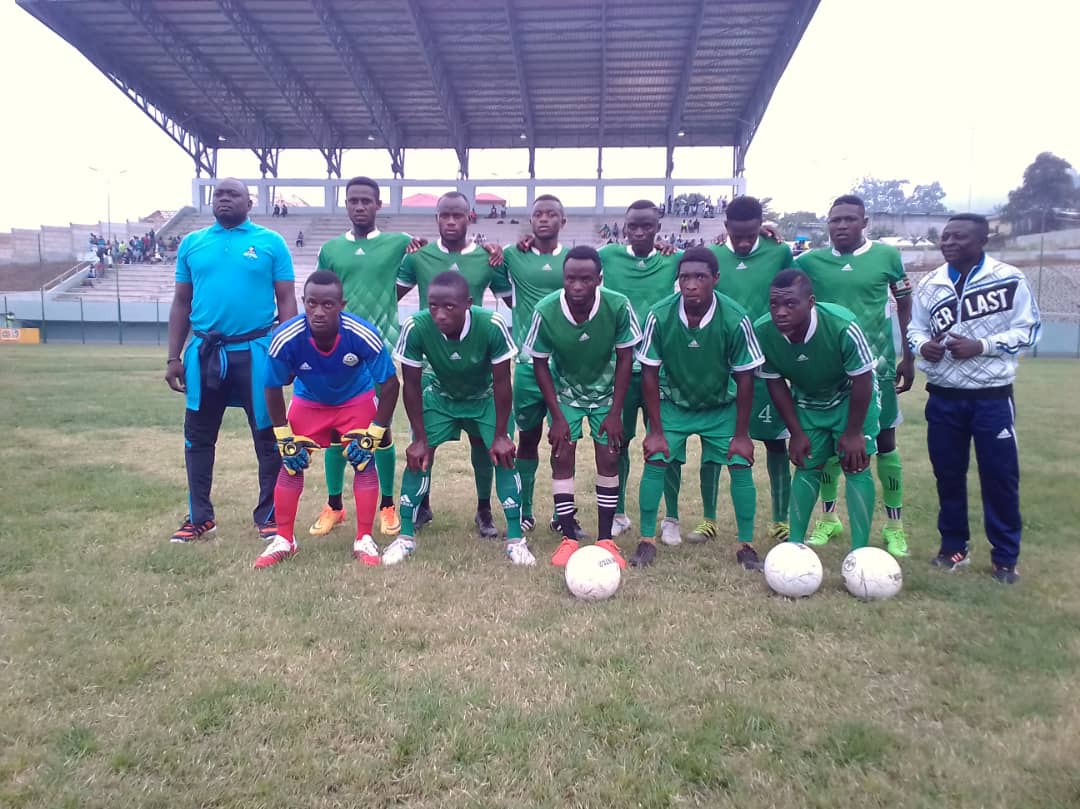