Fossil fuels may be the biggest concern for climate activists in western countries, but they’re also the most efficient source of energy humanity has developed. As such, the push to emphasize only renewable energy is a source of concern for African countries that are still working to ensure reliable electricity supplies. This concern is especially intense in oil- and gas-producing countries such as Nigeria, which stand to lose revenue as well as fuel if they don’t develop their resources.

Those are the summation of the argument and advocacy for Nigeria made by H.E. Chief Timipre Sylva, Nigeria’s Minister of State for Petroleum Resources and Mele Kyari, the Group Managing Director (GMD) of the Nigerian National Petroleum Corporation ( NNPC) in various platforms advocating for Nigeria and Africa, who are slated to participate in the upcoming African Energy Week sponsored by the African Energy Chamber in partnership with South Africa’s Department of Mineral Resources and Energy.

This four-day forum will bring together energy industry stakeholders from more than 20 nations on November 9-12 to discuss some of the most pressing problems facing African oil, gas, and renewable energy against the backdrop of mounting concerns about climate change.

Nigeria has been known for decades as a petroleum powerhouse, and there are good reasons for that. Our country is the biggest producer of oil in Africa, a supplier to major energy markets around the world, and a key member of the Organization of the Petroleum Exporting Countries (OPEC).

Nigeria also has some of the biggest gas reserves in the world. At last count, Nigeria possessed 206 trillion cubic feet of natural and associated gas in proven reserves, and this figure is likely to rise to at least 230 tcf by 2030. That’s more than enough to cover current demand levels. It’s more than enough to support plans for the construction of nine new gas-fired power plants with a combined generating capacity of nearly 6,000 MW by 2037. It’s more than enough to make gas a viable fuel for existing and new industrial facilities. It’s enough to transform this country from top to bottom. It’s why President Muhammadu Buhari has announced the “Decade of Gas” initiative, which aims to make Nigeria’s economy entirely gas-powered by 2030.

And yet, there are those who would have us leave this gas in the ground.

Why? For the sake of the climate, we’re told — and we at the African Energy Chamber agree that this is a genuine concern that must be addressed, especially since Nigeria is certain to suffer if average global temperatures rise, water levels climb, and weather patterns change.

So what will happen if we do that?

Certainly, there will be some positive consequences. Nigeria will attract praise from multilateral institutions such as the United Nations Framework Convention on Climate Change (UNFCCC) and the International Energy Agency (IEA) and non-governmental organizations (NGOs) such as Greenpeace. We’ll get some good press coverage. Maybe it will be enough to convince private investors to build new wind farms and solar parks. Maybe it will be enough to remind the world’s most advanced economies of their unfulfilled promise to mobilize USD100 billion worth of funding per year for climate mitigation.

Another question: What will happen if we don’t leave all that gas in the ground — if we develop it and make the most of it?

What’s more, it will also be able to take advantage of a low-carbon energy source — gas, which has done more than any other fuel to reduce emissions levels in the developed world. Why should Nigeria forego this opportunity?

Why should Nigeria forego any of the benefits of gas?

The African Energy Chamber’s answer: It shouldn’t. Nigeria shouldn’t leave its gas in the ground and run the risk of ending up with an energy transition that unfairly deprives its citizens of energy, as well as opportunity. Our Executive Chairman, NJ Ayuk made a strong and passionate case for this today at the Gas Exporting Countries Forum Workshop on Gas thanks to the invitation of Yury Sentyurin the Secretary-General.

Charting a course for sustainable hydropower development in Africa 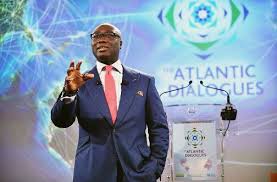