The Executive Chairperson of the Nekotech Center of Excellence, and Founder of the Nekotech Center for Labor Migration Diplomacy, and also a member of the African Union Labor Migration Advisory Committee, in an interview with Maxwell Nkansah says, African leaders need to come into agreement and regulate a proper systematic measure to favor the young ladies who go to the gulf to work as housemaid.

According to her, due to the lack of proper regulation from leaders of Ecowas, the situation of abuse of housemaid in the gulf will continue until proper structures are put in place. She further stated that, the government of Sierra Leone has taken a stand on legal migration to make it safe for their person who goes to the gulf for employment purposes.

She added that, the lack of job creation in the country has also increase the rate of young ladies running to the gulf. According to her, the Philippines are earning 400 dollars while Africans are receiving 250 dollars for domestic workers.

Dr. Ocancey continue to say the Ecowas needs to come together and regulate a system that makes policies and operationalize excellent decent work program to break the spell off African Youth Unemployment by matching them with vetted international employers in the gulf.

She stated that, many Ghanaian girls who migrate to Gulf countries through employment agencies end up as domestic hands in the residences of unscrupulous rich Arabs who use them as sex objects at the blind side of their wives. “A lady who craved for anonymity said there have been instances where fathers shared their African sex objects with their children. Women who resist such overtures are subjected to untold physical assaults by their owners as it were.

Unfortunately, many of these girls easily fall for the advertisements about what they stand to gain by taking the bold decision to migrate for the so-called green pastures in the Gulf States of Arabia. Their travel documents are collected by their bosses as soon as they land in their final destinations where they double as domestic workers and sex slaves

She initiated the development of a model international workers program for Ghanaian workers to work legally in the USA. After running successfully for three years, the modal is currently being rolled out internationally to Canada, USA, Australia and the gulf states in partnership with top international recruitment and placement agencies, such as Manpower UK- the largest recruitment agency in the world. 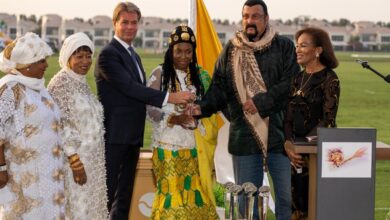 Musings on Fela in Turbulent Times