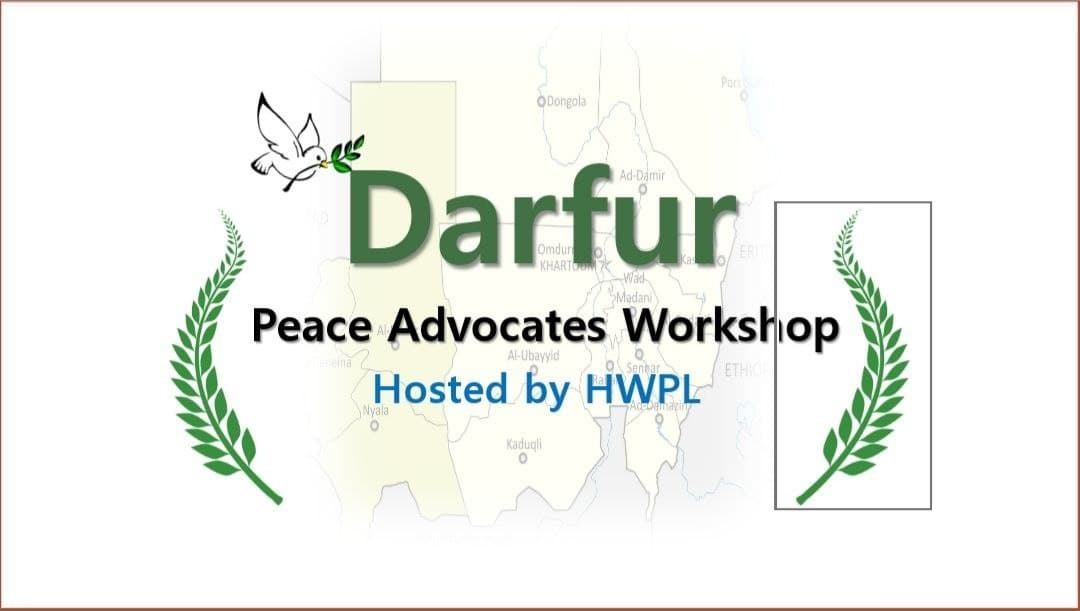 On July 30, The ‘HWPL Peace Advocates Workshop’ was held online in Sudan, which had significance for gathering local leaders from disputed regions to set the stage for dialogue under two themes: “Discussion on how to resolve disputes and how to build peace in Darfur.” The event was participated by a total of sixteen leaders of local tribes, civic groups, and youth organizations that lead the development of communities including Adam Salih Mohammed Atim, leader of Fur tribe, and Mohammed Aboshama Shata, leader of Arab tribe.

Attendees suggested the following as resolution of conflicts and peacebuilding: trial for perpetrators of genocide, disarmament of all tribes in Darfur, improving awareness of peace through peace education and workshops.

The prolonged drought in Darfur since the 1980s, has driven northern Arab nomads into southern African agricultural land. Meanwhile, the Sudanese government’s policy alienation in the western region was the starting point of the uprising. In February 2003 the conflict began in earnest when rebel groups opposing the policy alienation in the regions attacked the North Darfurand has continued to this day due to complex reasons such as racial and religious conflicts and regional inequalities. According to the United Nations, about 300,000 people were killed in fighting between Darfur rebels and pro-government Janjaweed militias, and about 2.5 million indigenous people walked 600 kilometers to flee to the neighboring countries Chad and South Sudan, who are still refugees. Even about 237,000 refugees were reported in the first four months of 2021.

Under these circumstances, leaders attended the online forum to protect the human rights of local citizens and to build sustainable peace, announcing their ideas on conflict resolution and peace. Heavenly Culture, World peace, Restoration of Light, an international peace organization (HWPL), the host of the event, also shared how the conflict was disputed in Mindanao, Philippines, where more than 140,000 people were killed in the 40-year conflict. HWPL encouraged participants to engage in peaceful activities in Sudan through Mindanao’s positive example achieved by citizen-led cooperation.

Shams Eldien Ahmed Salih Khamis, Teacher of Shams Eldien Academy Private High School said, “Making it known to everyone the importance of peace is the best way to bring peace to Darfur. Peace is the law of nature and the only way for everyone to be a winner. These courses should be spread through the workshop.”

Abaker Mohammed Sharf Mohammed, the former engineer of UN and peace activist, emphasized disarmament as a key for peacebuilding by mentioning, “Weapons are inhumane and it causes unnecessary suffering. Citizens who are not armed are dying by conflicts between some armed groups. There is no winner from conflict by using weapons.”

Ibrahim Ahmed Idris, the former facilitates management assistant of UNAMID, said “Peace agreement, which was set by Mindanao’s leaders and the Philippine government, and HWPL is very impressive. I hope what happened in Mindanao will happen in Darfur. It may be different from what happened here, but there is no problem in the world that cannot be solved. We want peace in Darfur and we want to find the future of the people of Darfur.

In 2014, Man-Hee Lee, a chairman of Heavenly Culture, World Peace, Restoration of Light (HWPL) visited Mindanao to resolve the dispute and held a peace walk event for the first time in Mindanao with more than 1,000 people including various religious groups, college students and international youth organizations. Chairman Lee asked participants, including religious leaders, youth organizations, and university professors, whether they want war or peace, emphasizing the need for peace. And with the consent of all participants he could finally lead a peace agreement. In addition, he proclaimed the ‘Declaration of Peace and Cessation of War (DPCW)’ in 2016, comprising 10 articles and 38 clauses to settle all disputes in the world and leave sustainable peace to future generations. The DPCW was drafted by international law experts in 15 countries to back up current international agreements and declarations in the changing international situation, based on the values and spirit contained in the UN Charter and the Universal Declaration of Human Rights.