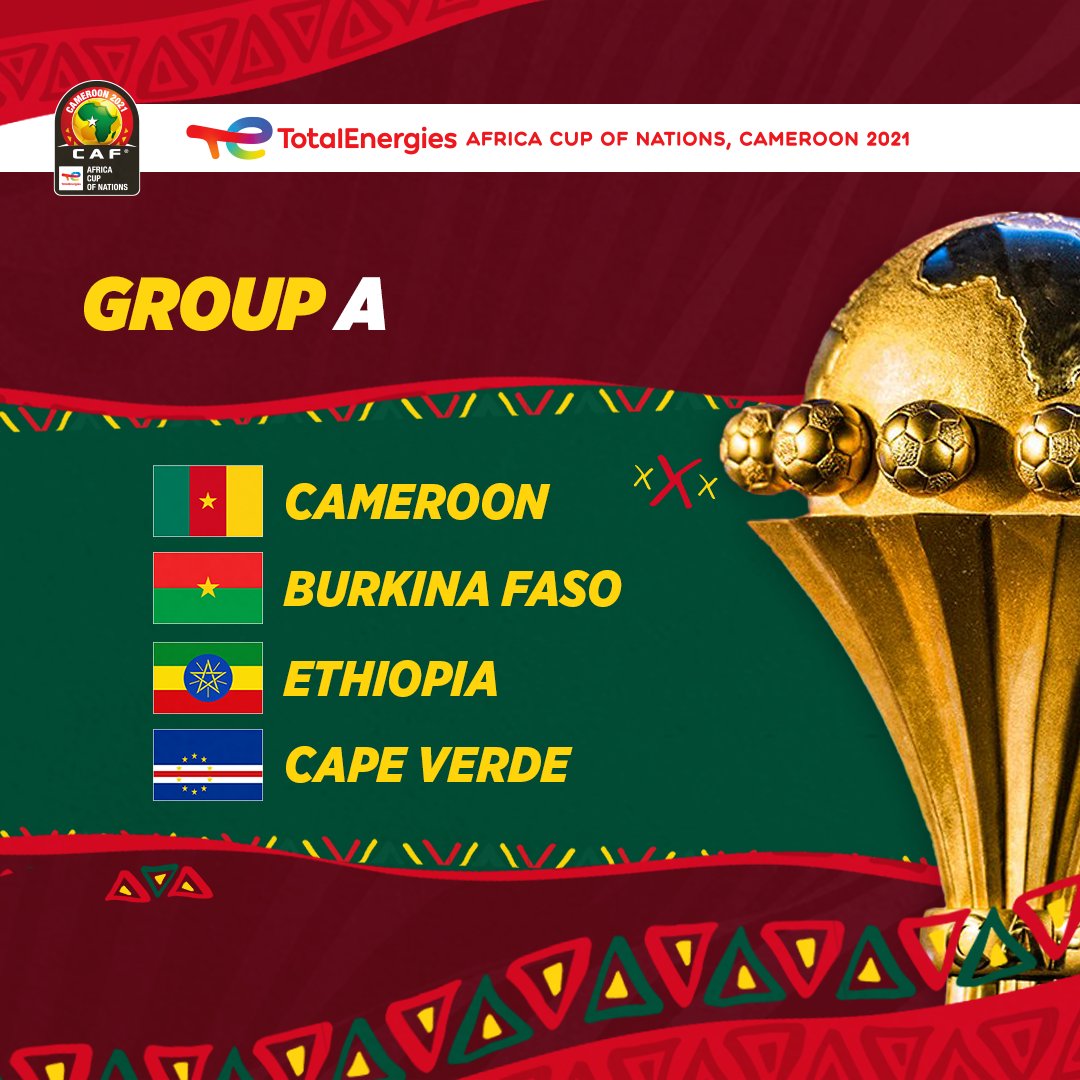 The Indomitable Lions of Cameroon has been handed a tricky draw at the upcoming TotalEnergies Africa Cup of Nations, AFCON, with the country placed in Group A alongside Ethiopia, Cape Verde, and Burkina Faso.

The draws for the competition took place Tuesday, August 17 at the Yaounde Conference Centre with the opening game on January 9, 2022, seeing Cameroon facing Burkina Faso.

The Indomitable Lions head into the 33rd edition of the AFCON looking for their sixth title after winning it back in 2017 with a late Vincent Aboubakar goal enough for the country to beat Egypt 2-1.

Cameroon will face teams that he has encountered in the past with the country having a better record amongst the other teams. However, these countries are no push-overs and have caused great miseries for the Indomitable Lions in the AFCON and FIFA World Cup qualifiers in the past.

In the Stallions of Burkina Faso, Cameroon faces a side that he has encountered on nine previous outings with the Indomitable Lions having the better of the results on four occasions, three of the victories came in friendly encounters. There have been four draws and Burkina Faso getting one victory.

Cameroon has failed to defeat Burkina Faso for the past six years with Burkina Faso beaten Cameroon back in 2018 in an international friendly (Burkina Faso 1-0 Cameroon). The last AFCON meeting between both sides came in 2017 and even then it was a draw; a result that shows that the Stallions are no pushovers.

Ethiopia is another side that Cameroon will have to contain if they are no move on to the next stage of the competition. The Walias are making their third appearance at the AFCON in Cameroon and the first in eight years.

The Walias had to power their way into the AFCON in a group that contained Madagascar, Niger and Ivory Coast. Despite their 3-1 defeat to Ivory Coast on the last day, Ethiopia still went ahead after Madagascar was held by Niger.

Cameroon and Ethiopia will be meeting only for the third time in their history with the last two meetings coming far back at the 1970 AFCON and the 2016 CHAN. At the 1970 AFCON, Cameroon ran out 3-2 victors while during the 2016 CHAN, both sides played out a 0-0 draw.

The final opponent for Cameroon, Cape Verde, will be arguably the toughest of all the other teams. This is because both sides will be meeting again after Cape Verde and Cameroon were in the same Group for the AFCON qualifiers. Cameroon topped the group while Cape Verde came in second.

The Blue Sharks will be meeting Cameroon for the seventh time and in the previous six games, Cameroon picked up three victories to Cape Verde’s two. Cameroon has failed to beat Cape Verde since 2012 when the country defeated Cape Verde 2-1 after the Blue Sharks had defeated the Indomitable Lions 2-0 that same year.

At the AFCON competition, Cape Verde has a better record than Cameroon (2 wins to Cameroon’s 1). The famous victory for Cape Verde came during the 2021 AFCON qualifiers where Cape Verde won Cameroon 3-1 to reignite their chance of qualifying for the Cameroon expedition.

Defending champions Algeria gets the Elephants

The Desert foxes of Algeria will be hoping to retain the title they won in 2019 in Egypt. The country has been placed in Group E, one of three groups that could be titled as “Group of death” alongside Sierra Leone, Equatorial Guinea and Ivory Coast.

With star players, Riyad Mahrez, Islam Slimani, Sofiane Feghouli, the country will again be amongst one of the favourites to come away with the title.

The elephants of Ivory Coast are hoping for a better performance next year after the previous two editions of the competition have did not go to plan. In 2015, Ivory Coast went all the way and captured only their second AFCON, with the team that contained the great Didier Drogba.

Sierra Leone and Equatorial Guinea complete Group E and these teams are no pushovers. They are bound to cause upsets when the country gets underway.

The TotalEnergies AFCON will begin January 9 and will run until February 6, 2022, across venues in Yaounde, Douala, Baffoussam, Douala, Garoua and Limbe/Buea.