Despite a public outcry against nepotism, Malawi President Lazarus Chakwera has defended the appointment of his daughter Violet Chakwera Mwasinga to Brussels, Belgium to work as third secretary at the Malawi mission.

Addressing members of the press today, Brian Banda, State House Press Officer said people should not question the decision because the appointment was duly done and that she (Violet) is qualified.

‘’Chakwera has made over 2,000 appointments and it is unfair for people to make such a conclusion based on a single appointment. The appointed person is qualified and capable to do the job. Are people questioning this because it involves the president’s daughter.?

That is unfair and worrisome,” said Banda.

This comes at the back of a staunch social media criticism that Chakwera has received.

The three are Luke Tembo, Billy Mayaya and MacDonald Sembereka

The appointments came in the wake of a recent diplomatic scandal in South Africa where officials at Malawian Embassy are alleged to have been part of a cartel that was buying alcohol using their diplomatic privilege and selling it. 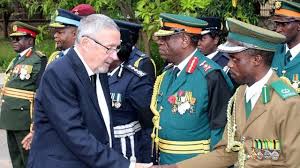 Zambia in the image of Black Africa