The Board of Directors of the East African Business Council (EABC) on Friday appointed Mr. John Bosco Kalisa as the new Executive Director / CEO of the EABC, the apex body of private sector associations and corporates in the East African Community.

Prior to this appointment, Kalisa served as the Country Director of South Sudan for Trade Mark East Africa (TMEA).

According to the statement released on Saturday, Kalisa brings a wealth of experience in promoting private sector development and competitiveness in the East African region, having spent over 20 years in various roles championing the business community involvement in the EAC region integration agenda.

“The new EABC CEO, John Bosco KALISA is an economist by profession with extensive experience in research & analysis and private sector development matters,” reads the statement in part.

“He has an in-depth understanding of the international, continental and regional trade agreements. He is an expert in taxation, commerce, international trade policy & law and economics having studied at leading universities in Pretoria, South Africa and Kigali, Rwanda,” it adds.

He also has a good rapport and network with the Government and industry captains in East Africa and beyond having previously worked with the Rwanda Private Sector Federation (PSF-Rwanda) and Rwanda Ministry of Finance and Economic Planning.

Kalisa brings on board rich experience and knowledge vital to steer the East Africa private sector agenda to higher heights in a bid to drive socio-economic resilience and growth EAC region, according to the statement.

“As the new Executive Director, he will lead the EABC Secretariat team to implement the strategic plan in close collaboration with EABC National Focal Points, members, and the business the community at large and in close partnership with East African Community Secretariat Organs and Institutions,” EABC said.

Kalisa will also spearhead resource mobilization and high-level advocacy at the Heads of State and Ministerial level to push forward the EABC’s purpose and vision of a borderless East Africa for increased business and investment.

Kalisa replaces  Dr. Peter Mathuki who was appointed as the Secretary-General of the East African Community  recently by the 21st EAC Heads of States.

FG SETS UP COMMITTEE ON ABDUCTION OF DAPCHI GIRLS 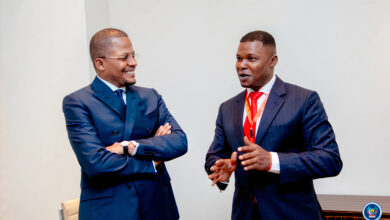