LONDON, United Kingdom, May 10, 2021,-/African Media Agency (AMA)/-Algerian security forces must refrain from using unlawful force to disperse protesters calling for radical political change, and release more than 60 “Hirak” movement activists who continue to languish in prison for their role in the demonstrations, Amnesty International said ahead of planned protests today.

Since weekly Hirak demonstrations resumed in February, after being suspended for almost a year due to the COVID-19 pandemic, authorities have used repressive tactics to crack down on protests in the capital of Algiers and several other cities, including forcibly dispersing peaceful gatherings, beating protesters and conducting mass arrests.

“The police forces’ heavy-handed response to brave protesters taking part in the Hirak movement exemplifies why people across Algeria are calling for political reform. The use of unlawful force and arbitrary detentions is unacceptable, and the eyewitness accounts we have heard are truly disturbing,” said Amna Guellali, Amnesty International’s Deputy Director for the Middle East and North Africa.

“The Algerian authorities must allow for peaceful protests without resorting to force and other punitive measures unnecessarily. All those detained solely for exercising their rights to freedom of expression, association or peaceful assembly must be immediately and unconditionally released and have all charges against them dropped.”

According to the National Committee for the Liberation of Detainees (CNLD), a local watchdog group, at least 63 activists are currently in detention in Algeria, 48 of whom were arrested since February. During two recent protests on 27 April and 30 April, authorities arrested 60 protesters.

While most protesters were released on the same day without charge, Algerian authorities have used repressive laws to prosecute dozens of peaceful protesters under charges such as “harming national unity”, “harming national interest”, “incitement to unarmed gathering”, “offending public officials”, or “offending the President”, just as they did at the onset of the Hirak movement in February 2019.

A student protest in downtown Algiers on 27 April was dispersed by police, who prevented demonstrators from reaching their gathering point and arrested dozens of peaceful activists.

Hassen Mebtouche told Amnesty International that he was part of a group who marched on the Place des Martyrs, the meeting point of the weekly protests, to find a heavy police presence blocking access to the square.

Mebtouche said four police officers grabbed him and bundled him into a police van containing 10 other protesters. He was then taken to Rouiba police station and held for six hours. There he was presented with a declaration to sign committing not to participate in protests again. Another protester arrested on the same day also said those detained were made to sign similar declarations committing to “not protest again on Tuesdays and Fridays.” The Algerian authorities must allow for peaceful protests without resorting to force and other punitive measures unnecessarily. All those detained solely for exercising their rights to freedom of expression, association or peaceful assembly must be immediately and unconditionally released and have all charges against them dropped. Amna Guellali, Deputy Director for MENA

Journalist Anis Chelouche told Amnesty International that he was beaten by the police with a baton while covering the protest and sustained bruising on his arms and legs. He said he showed officers his press badge, but this seemed to make them angrier. Anis Chelouche said one officer told him not to put any videos on social media that showed blood.

Alarming footage of the 30 April protest circulating online shows police officers beating and dragging protesters away. One of the videos shows a police cordon advancing towards a group of protesters to push them back. Despite that the activists were not offering any resistance, the police charged them with batons and forced them to run away to escape further reprisals.

On 22 February 2019, largely peaceful mass demonstrations took place across Algeria, initially opposing a fifth mandate of then-President Abdelaziz Bouteflika. After the former President stepped down, protests shifted to calling for “a complete change of the political system.”

Authorities held a presidential election in December 2019, which Abdelmadjid Tebboune, who served as prime minister under Bouteflika, won. Following his election, President Tebboune announced that he was “open to a dialogue” with the Hirak movement and publicly stated that his government would “consolidate democracy, rule of law and respect for human rights.” Yet, the authorities continued to clamp down on dissent, and prosecuted dozens of peaceful protesters.

According to the National Committee for the Liberation of Detainees (CNLD), as of February 2021, at least 2,500 protesters, journalists and activists were arrested in connection with their peaceful activism since the start of the Hirak movement, of which at least 350 were detained for a week or more. 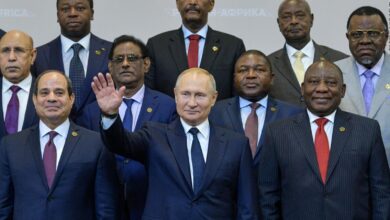 Information operations: An understudied facet of Russian influence in Africa