The planned East African Crude Oil Pipeline (EACOP), with a length of 1,440 kilometres (898 miles), will run from Western Uganda to Tanzania’s Indian Ocean seaport of Tanga. The oil pipeline worth $3.5 billion is expected to be completed within three years.

The agreement between Tanzania and Uganda is expected to unlock billions of dollars into the economies of both countries. Uganda discovered crude reserves in the Albertine rift basin in the west of the country near the border with the Democratic Republic of Congo in 2006.

“It is an investment not just for Tanzania or Uganda but for the Region. There have been discussions happening about this for a decade and this is a decade of negotiation finally closing,” NJ Ayuk, Chairman of the African Energy Chamber told South African Broadcaster SABC.

“It is beyond us just having a deal but looking at what this will mean for jobs, local opportunities that will build growth from bottom up. We just have to manage it well and ensure that the hopes and aspirations of Tanzanians, Ugandans and the whole of the East African community should not be held back by a fail promise of oil and this is critical for this.”

Looking at the benefits that will be brought about by this deal the Executive Chairman of the African Energy Chamber says local businesses and people have to start now. “If you do not have an opportunity you have to start looking for it now. Do not wait till the pipelines kick in; start looking at the possibilities of getting engaged (in terms of jobs). We should not sit at home and wait for that.”

“We need policies that back it. At the Camber we have engaged with both Presidents and the companies as well and got guarantees that say they are going to ensure that policies does back local content empowerment and also back inter-Africa trade so that Africans can inspire other Africans while working on this,” NJ Ayuk, CEO of Centurion Law Group, a pan-African legal and advisory conglomerate with its headquarters in South Africa and offices in Equatorial Guinea, Ghana, Cameroon and Mauritius added.

Often with oil companies who have been engaged on the continent, the tendencies are for them to export raw materials while the continent has to import the finished products. The Chairman of the African Energy Chamber says this deal is going to be different as part of the component is building a refinery in the country and it will create a space to serve entire East Africa. Parts of the petroleum resources will be refined and distributed to Uganda, Tanzania and the entire East Africa region as most of them at the moment are importing refined products out of UAE and Saudi Arabia.

“No longer should we be thinking about sending everything to Europe, America and Asia but we should be looking at domestication because our markets that are growing and growing vastly need these resources for us to be able to industrialize and manufacture and create jobs at home,” NJ Ayuk said.

The pipeline has met resistance from environmentalists who argue it will threaten ecologically sensitive areas along its route, including wildlife reserves and water catchment areas for Lake Victoria. To some NGOs, the project is a threat to local communities, water supplies, and biodiversity in Uganda, Tanzania, the Democratic Republic of Congo and Kenya.

And to NJ Ayuk we have to pay so much to the environment and be good stewards so we leave it much better than it was met. “Various measures have been put in place to cater for the environment by both countries. The communities need to be involved because if you do not you will face problems like in Nigeria (the Niger Delta region with vandalism, the pipeline explosion and others).”

He added: “The environment is a sensitive thing; the environment Commissions of both countries have set up monitoring and evaluations that will go throughout the process. We must encourage them to keep those checks and balances but also invite CSOs as part of the process. You cannot ignore them because they might have ideas that could be helpful and ensure we are not building something that ends up destroying the environment. After all, at the end, it becomes a loss to everyone.”

Extraction will begin this 2021 and will take place at two oil fields: the Kingfisher field, which is operated by China National Offshore Oil Corporation Ltd (CNOOC), and the Tilenga field, operated by Total S.A.

Obama nominates first US envoy to Somalia since 1991 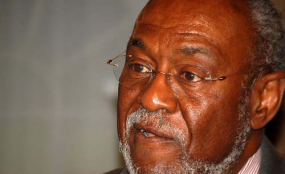