A Kenyan university student who set his relatives on fire is being held in police custody and will be arraigned upon completing the investigations.

As reported by the Star, the student is accused of setting his brother, wife, and child ablaze in a village in Kakamega County, the western part of the country, in the wee hours of Saturday of January 30, 2021.

The suspect allegedly committed the act in response to his complaints that his parents loved his brother more than him.

According to the mother, the suspect had been quarreling with her and his brother frequently and had warned them of dire consequences.

On the fateful day, Innocent Makokha (suspect) hurled insults at everyone around the home and threatened them with a machete.  He went ahead, broke the window panes, took a hoe, and began digging a grave for his brother.

The victims managed to escape from the burning house, though with severe injuries, and were rushed to the hospital.

“I heard distress calls on the door by my younger children asking me to open the door and that there was fire in their brother’s house. When I woke up I saw fire in the house and jumped out,” reiterated the mother.

The suspect’s brother breathed his last on Saturday, and his daughter died on Monday. His wife is still fighting for her life.

“We are piecing together information to get the culprits who did the crime. The brother is being held for malicious damage to properties but we haven’t found evidence to link him yet,” Muriithi said.

Lawrence Warunge, 22, had confessed to killing his father, mother, brother, cousin, and a farmhand employed by his family on January 6.

Warunge told the detectives that a British dark comedy-drama spy thriller TV series inspired him to commit such a gruesome act. 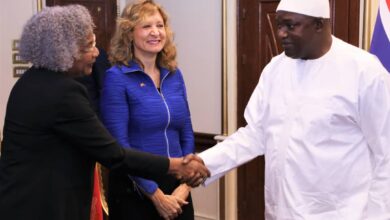 The Gambia’s Truth Reconciliation and Reparation Commission (TRRC), a Model for the Rest of the World – US Ambassador–at–Large

Africa: What Drove Asia’s Economic Success Stories, and What Should Africa Emulate?