Juba – The leader of the Sudan People’s Liberation Movement in Opposition (SPLM-IO), Dr. Riek Machar, says his group is committed to working towards building sustainable peace in the restive country.

SPLM-IO is currently holding its first-ever national conference in Juba, the 6th since the movement was formed under the theme, “building and sustaining peace through implementation of the revitalized peace agreement.” The conference runs through December 5, 2020.

The SPLM-IO was formed in April 2014 after a political disagreement among members of the ruling SPLM party led to the 2013 civil war.

Over 500 delegates comprising of politicians, military officers, and other representatives gathered in Juba for a five-day national conference of the SPLM-IO to deliberate on ways to “build and sustain peace through the implementation of the 2018 revitalized peace agreement”.

In his remarks, Dr. Machar, who is also the first vice president, stated the main opposition party is committed to silencing the guns.

“While SPLM/A IO remain steadfast and committed to the implementation of the agreement in letter and spirit, we expect the same commitment from our peace partner so that we can better manage together the challenges impeding the implementation process,” Machar said.

“The parties to the agreement are currently engaged in the process of implementation of R-ARCSS with the overarching objectives of achieving sustainable peace, security and transition democracy,” he added.

Former rebel leader also acknowledged the slow implementation of the Revitalized Agreement on the Resolution of Conflict in South Sudan RARCSS and called on peace partners to jointly work to implement the agreement.

Dr. Machar cited some of the challenges includes limited resources, lack of political will, lack of political space, economic crises, Covid-19, unprecedented floods, widespread inter and intra-communal violence, political and administrative vacuum in states, violations of the agreement, and the hold-out groups.

Machar also said the agreement offers the best opportunity for the country to end civil wars and political instability as well as offer an opportunity for reconciliation, healing, and development.

“On the implementation of R-ARCSS; establishment of a fund for the implementation of the agreement and to be independently managed, direct allocation of a fixed amount from the oil revenue for the fund and call for a donor conference to support the implementation,” Machar said. “Hold parties accountable for actions of defectors that join them, accelerate graduation of the Necessary Unified Forces and immediately commence phase 2 of the unification of forces, ensure the timely provision of the logistics to cantonment and training centers.”

Kiir’s side on ceasefire violations

Dr. Machar further accused the president Kiir’s side of engaging in a series of ceasefire violations and creating a stalemate in the security sector reforms.

He believes President Kiir’s party is not discharging enough political will to implement parts of the revitalized peace deal, adding the SSPDF has been instigating and provoking violence in some parts of the country.

His comments comes follow last week’s report by the UN Panel of Experts on South Sudan that the political momentum has eroded after President Salva Kiir locked the opposition out of the government’s decision-making process.

According to the experts, this has contributed to political and security disputes within the peace presidency, stalling implementation of the 2018 peace agreement.

Dr. Machar revealed that consultations have not been happening as expected.

“In line of violations of the agreement, appointment without consultations, non-dissolution of ITGoNU and national legislatures, we see these as a violation,” Machar said. “These violations are clear demonstration of lack of political will in commitment to the implementation of transitional security arrangement.”

However, in response, the Kiir’s group says the president has the right to make appointments –where necessary.

The revitalized peace deal states that the new unity government is founded on the premise that there shall be collegial collaboration in decision-making and continuous consultations within the Presidency, to ensure effective governance during the transitional period.

It’s already two year on but the fragile peace deal is yet to end the bloodshed and put the world youngest nation into the path of democracy. 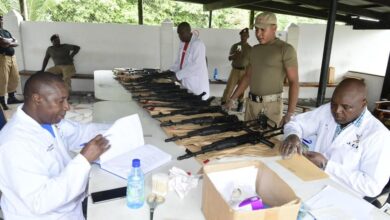