NEW YORK, USA, October 27, 2020,-/African Media Agency (AMA)/-A local organization in Mozambique is using the power of images to fight discrimination. Azemap, a volunteer-run organization that supports people with albinism, has begun painting five murals at schools across the central Mozambican province of Tete, in collaboration with Human Rights Watch. The murals depict two girls, one with albinism. Below the murals, it reads: “People with albinism are the same as you!”

In the past two years, I’ve encountered many people with albinism in Mozambique who are struggling —not because of their physical condition, but because their communities ostracize and discriminate against them, and authorities do little to combat this stigma or support their needs.

“People would come and throw rocks at me and I had to hide,” said Rosa, 34, describing her childhood. Her father abandoned the family because she had albinism. “People would say, ‘You’re not a person, you’re a witch.’ They would call me an ‘animal’ and say my color is not the color of a human being.”

Rosa is one of dozens of people with albinism whom we interviewed in Tete province. Albinism is a rare condition caused by a lack of melanin or pigmentation in the skin, hair, and eyes. Almost all of those we spoke to suffer widespread stigma, discrimination and rejection at school, in the community, and sometimes from their own families. They face significant obstacles to a quality education because of bullying by their peers and sometimes teachers, and little accommodation in the classroom for their low vision.

Josina, a 9-year-old student with albinism in Tete province who is depicted in the murals, has a hopeful story. Instead of being considered an outcast, she is integrated in her family, school, and community. If these images can touch a few hearts and minds, they may also help provide hopeful futures for Rosa and many others with albinism and begin to end the struggles they endure. 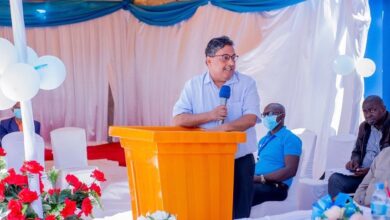