Juba -On Thursday, Sudan’s transitional government and the Sudan People’s Liberation Movement-North Al-Hilu faction has signed a declaration of principles agreement in the Ethiopian capital, Addis Ababa to enable a return to peace talks in Juba.

The declaration of Principles agreement was signed by Sudanese Prime Minister Abdalla Hamdok and Abdul-Aziz Adam Al-Hilu, leader of a faction of the Sudan People’s Liberation Movement-North in an effort for the restoration of democracy in Sudan.

This also comes a day after the Sudanese transitional government and the five Sudanese Revolutionary movements signed a peace agreement in Juba.

South Sudan had been mediating a peace talks between Sudan’s transitional government and the armed groups since last year, followed ousted of president Omer Al-Bashir through a protest, aimed at ending 17 years of conflict in the western region of Darfur and southern states.

Last month, the SPLM-N faction led by General Abdel-Aziz Adam al-Hilu and the Sudan Liberation Movement headed by Abdul Wahid al-Nur pulled out of the talks with the Sudanese government team, in protest against the chairmanship by Lt. Gen. Mohamed Hamadan Daglo ‘Hemeti’, who is Deputy Chairman of the Transitional Sovereign Council and Commander of the paramilitary Rapid Support Forces (RSF).

They accuse his forces of committing war crimes against civilians during the years of military unrest. The groups were also demanding a secular state.

But the Prime Minister Hamdok earlier appealed to the two holdout groups to accept the terms and join the peace process, saying the Sudanese urgently needs a comprehensive peace deal to ending the country’s decades of conflict.

In a joint instatement, prime minister Hamdok, Al-hilu agreed on the separation of religion from state, as Sudan should remain a multi-racial, ethnic, religious and cultural society, with full recognition and accommodation of its diversities.

“A democratic state must be established in Sudan. For Sudan to become a democratic country where the rights of all citizens are enshrined, the constitution should be based on the principle of ‘separation of religion and state’ in the absence of which the right to self-determination must be respected. Freedom of belief and worship and religious practice shall be granted in full to all Sudanese citizens state shall not establish an official religion. No citizen shall be discriminated against based on their religion,” the statement reads in part.

The two leaders also settled for complete political and social equalities of all the Sudanese as guaranteed by the law.

They further agreed that the people of Nuba Mountain and the Blue Nile shall retain the right to self-protection until security arrangements are agreed upon by the parties to the conflict and until ‘separation between religion and state’ is actualized.

They also agreed to cease hostilities throughout the peace process until security arrangements are agreed upon.

The deal also stipulated recognition of the principle of the appropriate and fair sharing of wealth and power among the peoples of Sudan through the constitution.

On Monday, during the signing ceremony, president Kiir says, though a lot has been achieved in our quest for peace in the Sudan, they are still far from resolving this conflict once and for all due to the holdout groups, which remains a challenge.

“In recognition of this unfinished work, we will redouble our efforts in convincing those who are not present in this ceremony to see value in this peace process and to be part of it. It is in this spirit that I am calling upon the two political forces (SPLM-North and SLM) to return to negotiating table in good faith,” said president Kiir. We firmly believe that military solution to Sudan’s internal conflict is not a viable option. As the leader of a country emerging from conflict, I must reaffirm our categorical rejection of the logic of force in resolving disputes.”

However, the Juba peace agreement addresses all the key issues in the resolution of Sudanese conflict, offers rebels political representation, power sharing, wealth sharing, transitional justice, land ownership, security arrangements or the dismantling of armed forces and the integration of former combatants or forces and the chance of return for internally displaced persons and refugees among others.

Sudan’s rebels are largely drawn from non-Arab minority groups that long railed against Arab’s domination of the government in Khartoum under ousted leader Bashir, who took power through coup in 1989. 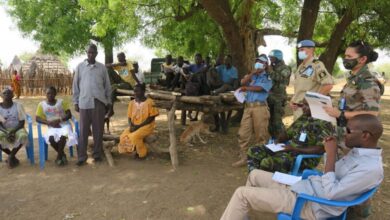