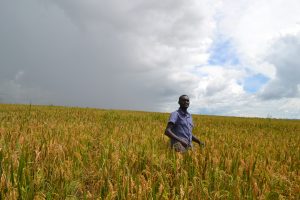 In Amuru district, 47 kilometres from Gulu town in northwestern Uganda, the Omer Farming Company has proven that it is possible to farm on thousands of acres of land using methods that conserve the environment and its biodiversity.

On a 5,000 acre piece of land, the company is growing upland rice with a yield of up to 3.5 metric tons per acre, using the conservation agriculture method.

“We do not plough the field, and we do not use fertilisers,” Dominic Kimara, the farm manager at the company, told IPS. “Instead, we grow a leguminous crop known as sunn hemp, and when it is 50 percent flowering, we roll it on the ground so that it can decompose and form green manure,” he explained.

According to the Food and Agriculture Organisation of the United Nations, this type of farming technique has several advantages for the environment because it reduces the use of farm machineries (which often emit carbon), sequesters carbon, and is cost effective and beneficial to the soil.

According to the report ‘Fixing the Business of Food initiative‘ by the Barilla Center for Food and Nutrition Foundation (BCFN), agri-food companies must consider the environmental and social impacts of business operations, including their production processes and other internal processes, with a focus on issues such as resource use (land, water, energy) and emissions, respect for human rights, diversity and inclusion, and decent work conditions that improve livelihoods of employees and their families.

“Indeed the four pillar framework is a sort of instruction manual to guide our efforts towards the active engagement of the private sector in the implementation of the 2030 agenda,” said Mariangela Zappia, ambassador and permanent representative of the Permanent Mission of Italy to the U.N. in New York.

However, the experts observed that despite a steady increase in investments in sustainable development and climate action, only eight percent of public climate finance is directed to the agri-food sector.

“There is one big risk: that a lot of our colleagues, a lot of other actors in the world of business feel the danger, but they do not have the courage to really take actions within their company to make these very difficult decisions,” said Guido Barilla, chair of Barilla Group and the BCFN Foundation, noting that the Barilla Group had to take a tough decision to stop the use of palm oil, which is the cheapest source of fat, but contributes to deforestation.

“We are late in the 2030 Agenda, we are losing time in completing the sustainability goals and to really rationalise the dangers and lower the dangers on climate change and on sustainability issues. It’s unaffordable. We need to make a call to action,” he said during a virtual launch of the report.

The report further points out that the shift towards more sustainable and healthier diets is a strong leverage to improve both planetary and human health.

This comes after a warning by another study about India that projects levels of undersupply and consequent malnutrition will significantly increase in 2030 and 2050 scenarios.

“Policy incentives in Indian agriculture since the Green Revolution have predominantly been focused on achieving caloric food security through increased production of cereals (wheat and rice),” wrote the researchers in a study titled ‘Sustainable food security in India—Domestic production and macronutrient availability’.

This, according to the scientists, has resulted in a heavy carbohydrate-based diet (65–70 percent of total energy intake) which may be significantly lacking in adequate diversity for the provision of other important nutrients.

The BCFN report points out that there is need for a radical transformation in order to cope with the environmental, social, and economic challenges of agri-food systems at global and local levels. “In 2020, the COVID-19 pandemic has exacerbated global development challenges especially for the most vulnerable communities around the globe,” it reads in part.

So far, the European Union is already promoting such transformation through the European Green Deal and the ‘Farm to Fork’ Strategy, aiming to make European food ‘the global standard for sustainability’.

The other pillars include contribution to healthy and sustainable dietary patterns through its products and strategies, and the impact and influence of companies beyond the perimeter of their direct and outsourced operations. The report notes that in some contexts, companies have co-responsibility for enhanced sustainability throughout their supply chains, value chains and within the ecosystems in which they operate.

The last pillar considers companies’ external strategies and engagement: both with the communities where they operate and with the rules that govern them.

“We must generate partnerships between the private sector and the public sector so that everyone in the world has access to healthy diets that are produced sustainably,” said Rachel Kyte, the Dean, at the Fletcher School at Tufts University.