Ondo state is one of the states in Nigeria the Independent National Electoral Commission would be conducting staggered election. The election holds October 10. Michael Adeboboye pictures the election scenario, political parties’ strength, candidates and electorates behavior pattern in the state.

Ondo State, one of the states in the south west geopolitical region in Nigeria is witnessing governorship election in October 10 as announced by the Independent National Electoral Commission (INEC). Although a staggered election birthed by court-proven electoral manipulation in 2007, the oil producing state people are sophisticated when it comes to electing theirs leaders, especially the governor who will manage their commonwealth for four years. Unlike some other states in the political zone largely dominated by Yoruba speaking tribe, the sunshine state (Ondo) seems to have been clothed with ray too hot to capture in the typhoon of god-fatherism; phenomenon where one money bag decides the fate of entire state by appointing his stooge and enthrone him against the will of the people. Election in such scenario is nothing but a mere formality. Since 1999 when Nigeria returned from military rule to democracy, daring Ondo electorates’ political sagacity is like a dangerous voyage into perilous abyss.

The immediate past governor of the state, Dr. Olusegun Mimikowas a product of rule of law. After a prolonged legal battle over the authentic winner of the 2007 governorship election in the state in 2007, the court of Appeal sitting in Benin City, Edo state gave the judgment in Mimiko’s favour in February 23, 2009. His predecessor, Late Dr.Olusegun Agagu who was sacked by the Appeal Court was a candidate of the People’s Democratic Party (PDP). Mimiko was the candidate of the Labour party (LP). That scenario fell off the state from the pedestal of general elections timetable in the country. Mimiko governed the state between 2009 and 2017, making him the first governor to have been on the governorship seat for a complete eight years. Mimiko later return to the PDP in controversial manner.

In 2016, Rotimi Akeredolu and Eyitayo Jegede, both Senior Advocate of Nigeria (SAN) slugged it out for the number one position of the state. Akeredolu contested on the platform of the All Progressive Congress (APC), while Jegede was the PDP’s flag bearer. Akeredolu emerged the winner of the election with a total of 224,842 votes, Jegede came second with 150,380 votes while Bar. Olusola Oke, another senior legal practitioner came third with 126,889 votes.

From 1999 till date, four different political parties have governed the state at different times. Late Adebayo Adefarati was elected on the platform of the Alliance for Democracy (AD) Agagu (PDP), Mimiko (LP) and presently, Akeredolu  (APC). For the 2020 governorship election the state, lNEC has fixed October 10 and announced seventeen political parties that would participate. Following the political trend, it appears only three political parties are to watch. The APC once again presented lt’s 2016 candidate for the election. Also, Jegede who was the PDP’s candidate in 2016 has won the ticket once again. The deputy governor of the state Agbola Ajayi is the candidate of the Zenith Labour Party, (ZLP). The election is around the corner and political intrigues are not in short supply. Meanwhile, the question agitating the minds of political pundits is what would influence the decision of the electorate?

According to Hon. Tony Ala who is a PDP leader in the state, he said the PDP as a political party has a track record of achievements that would influence the electorate in the election to vote for its candidate, Jegede as the next governor of the state. He said Jegede emerged the candidate of the PDP through a free and fair primary election, adding that when candidate of political party emerged through a transparent party primary, that would influence the decision of the electorates. He said the candidate of his party (Jegede) is a gentleman politician with credibility and personality that permeated all the nooks and crannies of the state.

̋Eyitayo Jegede emerged as the candidate of PDP in a free and fair party primary. None of the aspirants who contested for the party’s ticket alongside him alleged foul play in his favour. A free and fair primary election which the winner emerged through a transparent party primary attracts the interest of the electorate, even though they are not members of the political party or delegates, they monitor the process. PDP has governed the state before and our party has track record of unprecedented achievements to the benefit of the citizens. This is one of the many reasons Ondo State electorates have pressed their interest in the party for the October 10 governorship election. The people cannot be deceived. They know the governments of the PDP established it̕ s focus on people ̶ oriented projects. They know the party cares for the artisans, technicians, youths, market women, mothers and their children. The score card is there. They are saying it themselves, not achievement they hear only in the media. They all know the PDP run compassionate government. We are not telling all these to them. They are giving us their testimonies.

“The benefit of the PDP touched their lives directly. Talk  about education, health care infrastructure, social  welfare  and  all other  responsibility  of a good government,  our  party  is not comparable  to deceptive  government.  You cannot just continue to fool the people. The people of the state are the one reminding us of our numerous achievements. Everywhere we go, they said our party gave their children education. They said their children received free medical services during our government. The father said their pregnant wives were taking care at the mother and child hospital. They tell us about free surgery, regular supply of drugs, free school shuttle and outstanding facilities. The people of the riverside know that the PDP opened their roads to the land and regularly clear the waterways. They know their children had access to very low tuition fee in the higher institution of learning. PDP ̕ s achievement is too large to compare to the present administration. They tell us all those projects are gone now. The people are asking question which the APC government fails to give any convincing answer. Insecurity, corruption, tribal and religious sentiments are glaring hallmarks of the APC government in Nigerian. Our people are saying it is enough. Our candidate, Eyitayo Jegede, SAN is the most acceptable by the electorate. He is representing the PDP; political party which is the choice of Ondo State comes October 10”

In an interview with journalists (not this magazine), a governorship aspirant in 2016 who is leader in the APC, Hon. Gbenga Elebgeleye said Akeredolu has performed creditably well “I am from Ikare and if you go to my hometown, you will see the dualisation and rehabilitation of the roads. What the people desire is good governance. It does not matter who does it. I have just told you how the governor has performed in my part of the state. The projects are physical and visible. It is not something you will require binoculars to see. Akeredolu is giving good governance. In politics, opponent must say something to be relevant. I think the issue of Ondo state governor should be based on quality.

“Go and look at the Benin-Ore road and see a first class flyover bridge, first of its kind in the state built by Akeredolu. See the industrial park in Ore area as well as the vehicle Assembly Plant. Everybody knows that Akeredolu has improved road network in Ondo State. What do people want really? Quality service! People say Akeredolu is not a political person. Do we need a super politician as governor or performer?

“We have seen super “politician” and that is not the kind of politician Ondo needs. We need a super administrator and that is what we have in Akeredolu’’

“Indeed, out of all the top three political parties to be watched in October, the PDP had governed the state and the APC is the incumbent, thus the claim to have surpassed one another in respect to achievements by both is not out of place. However, the veracity rests in individual citizen perspective. And would that even be a major factor that would influence the decision of the electorates? Sadly, Nigerians political endorsement is garnished with don’t “shit” where you “eat” syndrome.

Apparently, Ondo electorate’s behaviour pictures can be glimpse in the 2015 and 2019 elections. Mimiko was the incumbent governor in 2015. And despite that he was the southwest coordinator for the re–election of the then president, Goodluck Jonathan who was seeking re-election on the platform of the PDP, the electorates voted against the PDP. The incumbent president Muhammadu Buhari of the APC won in the state. Same scenario repeated in 2019 where Presidential candidate of the PDP, Atiku Abubakar won in Ondo state despite having Akeredolu of the APC as incumbent. Will power of incumbency and federal might decide who becomes the next governors of Ondo State?

Ajayi the deputy governor whose political ambition led to resigning his membership of the APC, contested in PDP’s party primarily but lost to Jegede. His popularity cannot be cut down with razor blame. Though a third force on the platform of the ZLP, he is a politician with wide influence. He was a chairman of Ese- Odo Local government area of the state, Former House of Representatives member and the deputy governor who survived impeachment Tsunami of the APC even after leaving the party for another political party to contest.

For now, the three top contenders are engaging in rigorous campaign ahead of the election but the fate of who eventually becomes the next governor shall be found in the electorates thumb at the poll. 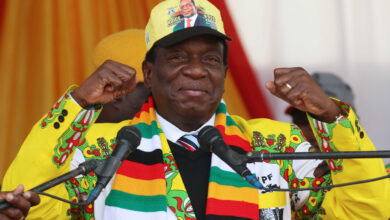