Juba – Sudan’s transitional government has signed a ‘historic’ peace agreement with Sudanese Revolutionary Movements in Juba, in a significant step toward ending the country’s 17 year conflict from the long rule of ousted leader Omar al-Bashir, during which hundreds of thousands were killed.

Sudan, a nation of 42 million people, has been riven by regional conflicts and corruptions for decades. The crisis intensified after its oil-rich South Sudan became independent in 2011, which beginning with a slow economic decline that fuelled the protests that pushed Bashir from power last year.

The Sudanese protracted peace talks were initiated by President Salva Kiir, a former comrade to some of the rebels during Sudan’s earlier civil war, which ended in the 2005, in order to resolve the root causes of conflicts in Sudan in the capital Juba late 2019.

This Juba peace agreement addresses all the key issues in the resolution of Sudanese conflict, including but not limited to, offers rebels political representation, power sharing, wealth sharing, transitional justice, land ownership, security arrangements or the dismantling of armed forces and the integration of former combatants or forces and the chance of return for internally displaced persons and refugees among others.

Gen. Mohamed Hamdan Dagalo, known as Hemeti, signed the deal on behalf of the transitional government of Sudan, who rights groups say committed many of the abuses in Darfur.

Both Chairman of the Sudan Sovereign Council, Gen. Abdel Fattah al-Burhan, and Prime Minister Abdullah Hamdok were in attendance, while President Kiir oversaw the ceremony as the guarantor.

Hemeti and Burhan were also blamed for attacks against ant – Bashir protesters in Khartoum in June 2019 that left over 120 people dead.

However, fighting between the Sudanese army and rebels in the Kordofan and Blue Nile regions erupted in 2011, in a wake of South Sudan’s independence, resuming a war that had raged from 1983 to 2005 that say they were also marginalized.

While conflict in Darfur began in 2003, left around 300,000 people dead and 2.5 million displaced after rebels took up arms there, according to the United Nations, with a former government leaders accused of carrying out genocide and of crimes against humanity.

Former president Bashir, who took power in a coup in 1989, was indicted by the International Criminal Court in 2009 and 2010 for crimes against humanity. Bashir is in jail in Khartoum convicted of corruption, is also now on trial for the 1989 coup in which he grabbed power.

The leaders of SRF, Darfur and southern states of Kordofan and Blue Nile, raised their fists in celebration and shook hands after signing the agreement.

The civilian and military leaders of transitional period in Sudan who have shared power began in July 2019, and then say ending internal conflicts is a top priority in the path to democracy in Sudan. They said the deal is a key step in the transitional government’s plan to bring an end to conflicts in Sudan.

However, Burhan says it views peace – building as the cornerstone for all its deeds

“As a country, we are extremely delighted at this imminent prospect for peace in the Sudan. We are also equally proud to have been able to make this modest contribution in helping our Sudanese brothers and sisters on opposing sides to reach this agreement. In doing so, we have fulfilled our duty to them in the knowledge that their peace and security is also our peace and security, meanwhile, their turmoil and instability is also South Sudan’s turmoil and instability,” said president Salva Kiir in his remark after the signing ceremony in Juba.

President also said “South Sudanese also know that by helping to restore peace in the Sudan, they are repaying the huge debt of gratitude that we owe the Sudan for the role it played and continues to play as a member of IGAD and as a guarantor to our peace agreement”.

Kiir added they do not view this initial signing of protocols as an end in itself rather as they view it as the beginning of the commitment by the Parties to honour and implement the agreement in the letter and spirit.

“This is a truly historic day,” said Sudan Prime Minister, Abdalla Hamdok, who is also a chair of IGAD as he called on holdout rebel groups to join the Juba deal he said would build ‘peace and stability’ in restive Sudan.

Prime Minister Hamdok said a deal is a gift to the displaced children and refugees who have been afflicted by woes of war and lost their homes, pledging to complete the peace process.

The SRF is part of the pro-democracy movement that led the uprising against Al – Bashir, but the rebels didn’t fully the military-civilian power sharing deal.

Ahmed El Hadi Idris, Chairman of Sudan Revolution Front (SRF) described it “historic” achievement as it was the product of their struggling and sacrifices.

“The SRF has signed a historic agreement with a forces of freedom and change,” said Idris, collectively we will work to unite, unify the forces of a revolution and change and form the historic bloc in supporting the political transition and achieving peace and security and working for well-being of all Sudanese people and achieving the revolution slogans of freedom, peace and justice.”

Analysts described it as ‘a tremendously significant’ deal but said it was far from achieve a comprehensive peace in Sudan as some substantial hurdles remained on the way.

“The main challenge facing us now is the implementation of the peace agreement, and finding donations to do that,” said Jibril Ibrahim, leader of Darfur’s Justice and Equality Movement (JEM) after he signed the agreement.

Though, parties are going to face some problems when they start to this [deal] from paper to the ground – but both said they have that political will to implement it.

Amb Jerimahia Mambolo, Head of the UNMID “This is a lasting peace, there is no doubting.”

The United States, United Kingdom and Norway in a joint statement said they welcomed the peace agreement as the first step in a long process to rebuild hope and stability for conflict-affected communities in Sudan and as well as it lays a foundation for sustainable peace and stability in Darfur and other conflict-affected areas that is critical for Sudan’s democratic transition.

“It is an important step in restoring security, dignity and development to the population of Sudan’s conflict-affected and marginalized areas. We believe the formal agreement must be followed up with local peace and reconciliation efforts in the conflict-affected areas,” the countries said in the statement.

However, President Kiir in conclude my remarks, assured all the Parties that his government stand ready to support the implementation of the Juba Peace Agreement initialled today.

“I am also calling upon the international community to remain alongside the Sudanese people as they embark on their long and difficult journey to implement this Agreement. Your political and diplomatic supports are important for shoring up the Agreement and for mobilizing resources that will help the Sudan to embark on its post-conflict reconstruction,” said Kiir.

The Troika further said they will continue to support the Sudanese people in their quest for freedom, peace, and justice.

However, an SLM faction led by Abdelwahid Nour and a wing of the SPLM-N faction from the south headed by Abdelaziz Al-Hilu refused to take part, though was involved in the talks.

The holdout faction has called for a secular state with no role of religion in lawmaking, the ending of Al-Bashir’s militias and the refurbishing of the country’s military.

Malik Agar, leader of the SPLM-N faction that agreed to the deal, called on his comrades still fighting to lay down their guns and join the peace process.

“I announce from this platform the end of the war and we will not go back to war,” said Agar in a speech, calling on holdout groups to not miss this historic opportunity.

Both Juba government, the troika countries call on the holdouts to join the peace deal in order to end the conflict and suffering in Sudan region.

President Kiir says, though a lot has been achieved in our quest for peace in the Sudan, they are still far from resolving this conflict once and for all due to the holdout groups, which remains a challenge.

“In recognition of this unfinished work, we will redouble our efforts in convincing those who are not present in this ceremony to see value in this peace process and to be part of it. It is in this spirit that I am calling upon the two political forces (SPLM-North and SLM) to return to negotiating table in good faith,” said president Kiir. We firmly believe that military solution to Sudan’s internal conflict is not a viable option. As the leader of a country emerging from conflict, I must reaffirm our categorical rejection of the logic of force in resolving disputes.”

The Troika urges the holdouts to build on this achievement and to engage in serious negotiations with the Government of Sudan in order to achieve the promise of a comprehensive peace called for by the Sudanese people in the revolution of December 2018.

The non-violent December 2018 Revolution provided a once-in-a generation opportunity to transform Sudan into an inclusive, peaceful, and just state.

“We urge the SRF, other opposition groups, and political parties to put aside differences and personal ambitions for the good of their entire country.  The Troika urges Sudan’s diverse communities to overcome old enmities and to unite to support this singular opportunity for lasting peace,” said Troika.

“We will have turned a page on war forever,” said Idris while call upon other revolutions to join a peace now and now tomorrow because this peace has set Sudan on the right path of ending conflict.

Sudan’s rebels are largely drawn from non-Arab minority groups that long railed against Arab’s domination of the government in Khartoum under ousted Bashir.

The deal would grant self-rule for the southern states of Kordofan and Blue Nile. The deal also includes a six-month deadline for achieving peace in Sudan, which ran out in February.

The agreement stipulated extension of the transitional period in Sudan for extra 39 months, to begin starting September 1, 2020. 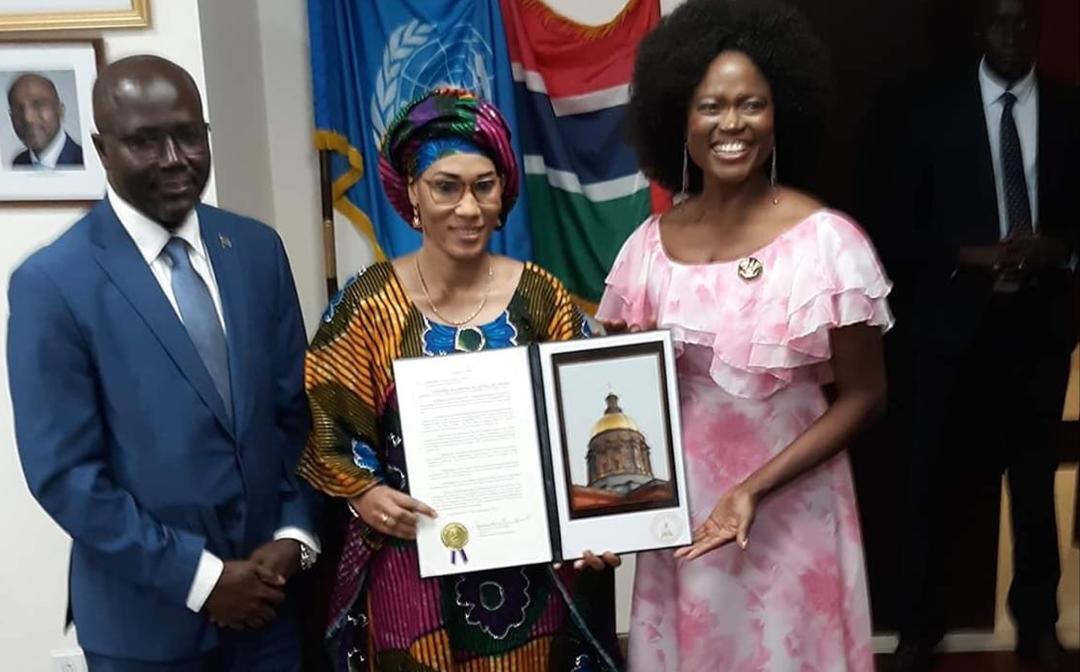