Onergia, one of the two energy cooperatives operating in Mexico today, installs photovoltaic systems, such as this one at the Tosepan Titataniske Union of Cooperatives in the municipality of Cuetzalan, in the southern state of Puebla. CREDIT: Courtesy of Onergia

A Mexican solar energy cooperative, Onergia, seeks to promote decent employment, apply technological knowledge and promote alternatives that are less polluting than fossil fuels, in one of the alternative initiatives with which Mexico is seeking to move towards an energy transition.

“We organised ourselves in a cooperative for an energy transition that will rethink the forms of production, distribution and consumption to build a healthier and fairer world,” Onergia founding partner and project director Antonio Castillo told IPS. “In this sector, it has been more difficult; we have to invest in training and go against the logic of the market.”

The eight-member cooperative, created in 2017, has so far installed some 50 photovoltaic systems, mainly in the south-central state of Puebla.”A public policy is needed that would allow us to move towards the transition. Getting people to adopt alternatives depends on public policy. It is fundamental for people to have the freedom to choose how to consume. It is our job to organise as consumers.” —
Antonio Castillo

Castillo explained by phone that the cooperative works with middle- and upper-class households that can finance the cost of the installation as well as with local communities keen on reducing their energy bill, offering more services and expanding access to energy.

In the case of local communities, the provision of solar energy is part of broader social projects in which the beneficiary organisations’ savings and loan cooperatives design the financial structure to carry out the work. A basic household system can cost more than 2,200 dollars and a larger one, over 22,000.

“The communities are motivated to adopt renewable energy as a strategy to defend the land against threats from mining or hydroelectric companies,” said Castillo. “They don’t need to be large-scale energy generators, because they already have the local supply covered. The objective is to provide the communities with alternatives.”

In Mexico, energy cooperatives are a rarity. In fact, there are only two, due to legal, technical and financial barriers, even though the laws governing cooperatives recognise their potential role in energy among other diverse sectors. The other, Cooperativa LF del Centro, provides services in several states but is not a generator of electricity.

The Electricity Industry Law, in effect since 2014, allows the deployment of local projects smaller than one megawatt, but practically excludes them from the electricity auctions that the government had been organising since 2016 and that the administration of leftwing President Andrés Manuel López Obrador put a stop to after he took office in December 2018.

Since then, López Obrador has opted to fortify the state monopolies of the Federal Electricity Commission (CFE) and the Petróleos Mexicanos (Pemex) oil giant, which translates into favouring fossil fuels over renewable sources.

In 2032, the energy outlook will not vary much, as fossil fuels will account for 60 percent; wind, nuclear and geothermal energy will rise to 13, eight and three percent, respectively; hydroelectric power will drop to eight percent; while solar and bioenergy will remain the same. 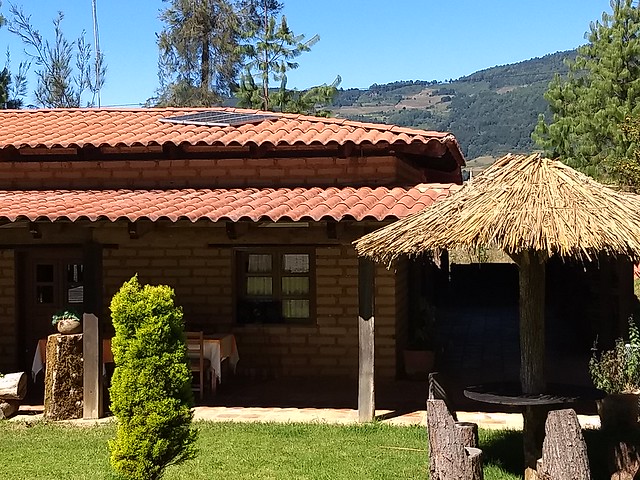 In Mexico, rural communities are guaranteeing their electricity supply by using clean sources, thus furthering the energy transition to micro and mini-scale generation. The photo shows the “Laatzi-Duu” ecotourism site (the name means “standing plain” in the Zapotec indigenous language) which is self-sufficient thanks to a solar panel installed on its roof, in the municipality of San Juan Evangelista Analco in the southern state of Oaxaca. CREDIT: Emilio Godoy/IPS

The government cancelled the call for long-term electric auctions that allowed private companies to build wind and solar plants and sell the energy to CFE. But these tenders privileged private Mexican and foreign capital and large-scale generation.

In a dialogue with IPS, independent researcher Carlos Tornel questioned the predominant energy design promoted by the 2013 reform that opened up the hydrocarbon and electricity markets to private capital, and the form of energy production based on passive consumers.

“We don’t have an effective legal framework to promote that kind of energy transition,” said the expert via WhatsApp from the northeast English city of Durham. “A free market model was pursued, which allowed the entry of megaprojects through auctions and allowed access to those who could offer a very low cost of generation, which could only be obtained on a large scale.”

With that strategy, he added, “small projects were left out. And the government did not put in place economic incentives to foment cooperative schemes.”

“We need a more active model focused on the collective good,” added Tornel, who is earning a PhD in Human Geography at Durham University in the UK.

Mexico, the second largest economy in Latin America with a population of 129 million, depends heavily on hydrocarbons and will continue to do so in the medium term if it does not accelerate the energy transition.

The Energy Transition Law of 2015 stipulates that clean energy must meet 30 percent of demand by 2021 and 35 percent by 2024. By including hydropower and nuclear energy, the country will have no problem reaching these goals. 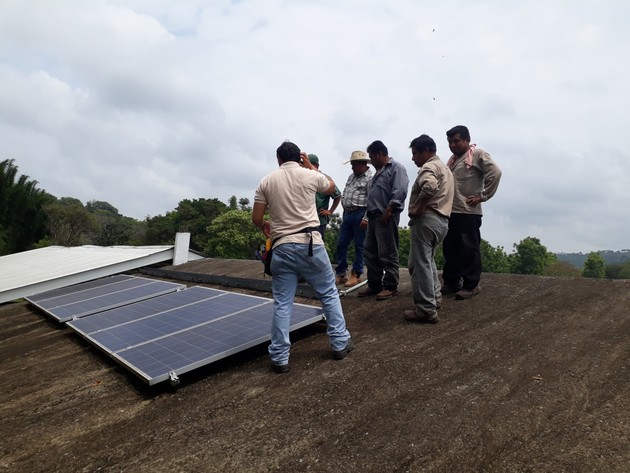 Residents of the small rural community of Amatlán, in the municipality of Zoquiapan in the state of Puebla, oversee the operation of photovoltaic panels installed by the Mexican cooperative Onergia. This type of cooperative can help rural communities in Mexico access clean energy, particularly solar power. CREDIT: Courtesy of Onergia

The 2017 report Renewable Energy Auctions and Participatory Citizen Projects, produced by the international non-governmental Renewable Energy Policy Network for the 21st Century (REN21), cites, with respect to Mexico, the obligation for investors to form self-sufficient companies, which complicates attempts to develop local ventures.

Onergia’s Castillo stressed the need for a clear and stable regulatory framework.

“A public policy is needed that would allow us to move towards the transition,” he said. “Getting people to adopt alternatives depends on public policy. It is fundamental for people to have the freedom to choose how to consume. It is our job to organise as consumers.”

Affected by the coronavirus pandemic, Onergia is reviewing the way it works and its financial needs to generate its own power supply. It also works with the Renewable Energies Institute of the National Autonomous University of Mexico in the design and installation of solar power systems.

In March, the government’s National Council for Science and Technology launched a strategic national programme on energy transition that will promote sustainable rural energy projects and community solar energy, to be implemented starting in 2021.

In addition, the energy ministry is set to announce the Special Energy Transition Programme 2019-2024.

But to protect the CFE, the CRE is blocking approval of the development of collective distributed generation schemes, which would allow citizens to sell surplus energy to other consumers, and the installation of storage systems in solar parks.

Tornel criticised the lack of real promotion of renewable sources.

“The Mexican government has been inconsistent in its handling of this issue,” he maintained. “They talk about guaranteeing energy security through hydrocarbons. There is no plan for an energy transition based on renewables or on supporting community projects. We have no indication that they support renewable, and that’s very worrying.”

The REN21 report recommends reserving a quota for participatory citizen projects and facilitating access to energy purchase agreements, which ensures the efficiency of tenders and the effectiveness of guaranteed tariffs for these undertakings.

In addition, it proposes the establishment of an authority for citizen projects, capacity building, promotion of community energy and specific national energy targets for these initiatives.

The post Energy Cooperatives Swim Against the Tide in Mexico appeared first on Inter Press Service.