World Humanitarian Day is the perfect time to refresh our push to localize humanitarian aid for COVID-19 and all the challenges we face. Celebrating #RealLifeHeroes!

I’ll never forget the day when the Palabek refugee settlement officially became home to South Sudanese refugees in the Acholi Sub-region of Northern Uganda. The year before, I had visited the area in Lamwo District with my team from the African Women and Youth Action for Development (AWYAD).

We were shocked to find hundreds of refugees, mainly women and children, living under trees. They had no protection and told us that cross-border attacks by rebels were frequent. Still, they refused to move on to the closest designated Refugee settlement in West Nile.

I remember them telling us repeatedly, ‘we will not be safe there; our people are fighting there too’. One woman pointed to a watering hole and said, ‘we’d rather drink water here with the cattle than go there’.

After we left and I got back to the coordination office in Kampala, their words continued to dance in my mind. I had to do something.

Immediately my team and I joined hands with Lamwo District Local Government officials, the Wanainchi, together with the refugee representatives, and we began to lobby the central government asking for the establishment of the refugee settlement in Lamwo District.

In less than a year, the Ugandan government responded to our appeal and in April 2017, Palabek became the official home to over 20,000 of refugees at the time of its inception. My heart filled with pride that once again, we Ugandans had answered when our neighbors knocked on our door. Currently Palabek hosts more than 53,000 refugees.

I use this case as just one example of how, over the years, local leaders and organizations have increasingly become the first responders when disaster hits. Refugees in Uganda, always receive their first emergency support from the local actors.

Uganda is the largest refugee hosting country in Africa. The country hosts about 1.4 million refugees, the majority from South Sudan and the Democratic Republic of Congo. 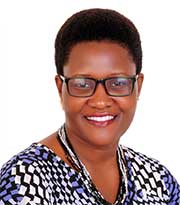 Uganda’s progressive refugee policy has enabled its nationals to stand with refugees and share their limited resources with them. Northern Uganda is one of the country’s poorest region, but it hosts over 60% of the refugees. All are settled on citizens’ land.

The great contribution of the hosting communities, the local NGOs and the government has meant that many refugees have been given a second home after being forcibly being displaced from their country of origin. Unlike other hosting countries, Uganda’s refugees, especially the majority in the northern part of the country, are integrated within the hosting communities.

And yet, time and again, local actors and communities, who have shown that they are part of the solution, are sidelined when the international actors arrive. Suddenly, we ‘lack capacity’ and our indigenous knowledge and physical proximity are undervalued.

Debates on localization and the balance of power between the so-called Global North and Global South have been gaining traction in humanitarian discourse over the last decade. The first UN World Humanitarian Summit in 2016 in Istanbul was intended to fundamentally reform the humanitarian sector so that it could react more effectively to today’s many crises.

Among the major things emphasized was the need to adapt to new challenges through local, inclusive, and context specific responses.

This need to re-think global humanitarian response has to a large extent been driven by escalating humanitarian needs – over 168 million people are in need of humanitarian assistance worldwide today, coupled with protracted crises around the globe, which call for a more diverse thinking.

The current global COVID-19 pandemic has posed yet another threat to the already shrinking humanitarian basket. It has exposed once again the need for more country-based systems that are able to address emergencies and mitigate future risks, using locally available solutions.

But on the ground, the shift to valuing local actors as critical part of the solution is still not being felt enough. The rhetoric has not translated into action. And I have been forced to face up to the reality that the humanitarian system was built by and for international actors, multilateral organisations and international NGOs. Not for us to find local solutions to global problems.

In the case of Uganda, although it is one of the first countries to adopt the Comprehensive Refugee Response Framework (CRRF), and has further integrated refugee response in the National Development Plan Three (NDPIII), local groups are still left in the periphery during the planning and implementation of refugee response programs.

There is a persistent misinterpretation of localization by many international agencies that limits localization to local-staff recruitment and one-off project-based community consultations.

This is not enough, especially as we are responding to a protracted refugee crisis. Response programmes need to speak to each other at every stage, if not there is a great risk that we end up with parallel response strategies which in the long term means that there is a gap between the emergency and the recovery phase.

Local groups must be included in order to manage smooth transitions from the emergency and recovery phases, where host communities play a fundamental role.

Closer to home, in Palabek, after mobilizing for the establishment of the settlement alongside fellow local groups, we received no support to continue our work. You cannot imagine my disappointment when after fighting so hard for its opening, only INGOs received funding.

The reason given was that none of us local organizations had “the capacity” to offer humanitarian services. It felt like once again, the commitment made in Istanbul, to “empower national and local humanitarian action by increasing the share of financing available to them” was mere lip service.

So today, we continue work at the service of implementing partners. The set structures within the settlement themselves are skewed towards giving INGOs more power. Everything we do, must be approved by them. More often than not, they do not support our innovative ideas, claiming that they are not up to standard!

This paternalistic attitude needs to change. INGOs need to be willing to have real partnerships with local actors. And yes, this also means giving up some of the jobs and some of the money so that we have the “capacity” to help find long lasting solutions to emergencies like the refugee crisis.

We’ve talked enough. We’ve shown that we can lead humanitarian interventions. Now we need more action from all those concerned. And I think that change needs to start from those who currently hold the power, INGOs. They must:

– Develop strategies that will support local actors to regain the space to operate where we are needed.
– Meaningfully engage local groups in all processes of planning and implementation of response programs in our countries, through our national disaster management and humanitarian response plans.
– Develop a new Global Humanitarian Response Plan that includes local and national NGOs directly, recognizing that our perspectives and contributions are not always reflected in Humanitarian Country Teams (HCTs) and in clusters.
– Support and encourage unconventional, alternative and creative responses that go beyond standard sectoral approaches. These must empower local people and organizations, including the faith community and women-led organizations, to take active leadership roles.
– Work in collaboration and coordination with us and local authorities, to address and ensure humanitarian principles and standards are met.
– Provide flexible funding, including adequate and consistent support for organizational overhead and staff
– Provide greater direct funding to local and national groups under the new COVID-19 funding mechanisms, opening up calls for new partners, with simplified and fast-tracked partner assessment processes, wherever possible. Grants should be allocated directly to Local and National NGOs, rather than via intermediaries.
– Track the Global Humanitarian Response Plan COVID 19 funding through International Aid Tracking Initiative (IATI) reporting, so there is transparency and accountability of the funds being raised in the names of populations in Crisis.

I firmly believe that localization will not be achieved until the application of the historical westernized humanitarian systems are regulated, to give room for local context-based solutions.

As we celebrate #RealLifeHeroes on World Humanitarian Day, we shouldn’t leave it as a one-off ceremony, but rather use it as an opportunity to strengthen our commitment to local actors so that they can in turn continue to support populations in need.

It is a chance to work in earnest to remove the bottlenecks that have hindered their ability to access humanitarian funding and operational space.

African Women and Youth Action for Development (AWYAD) is a local woman-centered humanitarian and development organisation in Uganda that works in refugee protection response; education in emergency and women’s rights advocacy.

The post We Must Prioritize Local Solutions to Global Problems appeared first on Inter Press Service.

The post We Must Prioritize Local Solutions to Global Problems appeared first on Inter Press Service.

Beating Anger into Empathy: the Need of the Hour in Ethiopia