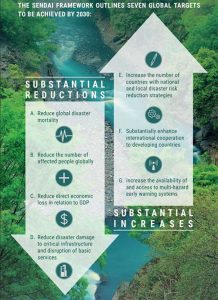 The COVID 19 Pandemic continues relentlessly. Deaths approaching a million globally, 22 million infected and growing. Brazil, India, the US and Russia accounting for almost 50% of the total cases in the world.

Medically the promise of a vaccine is given as signs of hope; what surprises awaits us when such a vaccine is available, would be another story. Economically, to address the uncertainty and the grim future ahead, the UN, some governments and even Joe Biden the US Presidential hopeful, are waving “Build Back better” as ways to achieve ‘a new normal’ out of the current pandemic.

Other concepts such as Circular Economy (CE) are gaining more adherents. Professor Martin Charter in a recent edited book, “Designing for the Circular Economy’, published by Routledge (2019), says, “product circularity means taking an extended lifecycle perspective that focusses on maximising value in economic and social systems for the longest time”.

He offers ‘CE’ as a key part of achieving the SDGs, though he also cautions that CE is not a magic bullet and “achieving a more sustainable future will require integrated, systemic thinking, creativity, hard work and change”. The book is a very useful collection of contributions covering different industries and design specialists.

While we see young engineers and others, even in developing countries, applying concepts like CE and biomimicry to contribute to sustainability, CE also has its critics. ‘Low Tech Magazine’ (www.lowtech.org) is of the view that, “The circular economy – the newest magical word in the sustainable development vocabulary – promises economic growth without destruction or waste.

However, the concept only focuses on a small part of total resource use and does not take into account the laws of thermodynamics”. CE would need a movement from all sides, government, industry and consumers to be actually implemented in practice.

Talking of movements, one is represented in ideas around ‘Degrowth’. Provoked by a question, the famous French philosopher Andre Gorz, asked around 1972, “Is the earth’s balance, for which no-growth – or even degrowth – of material production is a necessary condition, compatible with the survival of the capitalist system? ”, gave rise to the famous word “décroissance”, French for ‘degrowth.

After the COVID 19 Pandemic, ‘Degrowth’ is also gaining currency. In, ‘Degrowth – A Vocabulary for a New Era’ published by Routledge, three ecological economists, Giacomo D’Alisa, Frederico Demaria and Giorgis Kallis, bring 51 contributors to examine a wide range of topics and themes related to Degrowth. Published in 2015, it gains greater relevance now.

The Editors state in their Preface, “When the ordinary language in use is inadequate to articulate what begs to be articulated, then it is time for a new vocabulary”. They point to the deep ills plaguing the world such as growing inequalities, socio-ecological disasters, climate change and the continuous disaster of deaths by lack of access to land, water, and food.

To this we can add, the pandemic deaths, the Australian Bush fires, the Beirut explosion and the massive oil spill in the serene territorial waters off Mauritius endangering livelihoods and marine life. Apocalypse now? May be not! The quote at the beginning of this contribution, is from a must read chapter in the book by Serge Latouche titled, ‘Pedagogy of Disaster’.

Latouche says, “Worshippers of progress immediately accuse anyone who reflects on the dangers that threaten our civilization of pessimism”. He quotes Hans Jonas, philosopher and author of the much celebrated book, ‘The Imperative of Responsibility: In Search of an Ethics for the Technological Age’ who had said, “it is better to lend an ear to the prophecy of misfortune than to that of happiness”.

In Latouche’s view, Hans Jonas, “does not masochistically hope for a taste of the apocalypse, but precisely to ward it off”. For Latouche, Jonas’ appeal is “an alternative to the suicidal optimism of a ‘politics of ostriches’. In a tone of melancholy, he says, “It is this latter blissful (and passive) optimism that will lead certainly to more disaster than an attitude of a crystalizing catastrophe”.

The ”worshippers of progress” in the world today are many. Among the powerful, Bolsinaro, Modi, Putin, Trump and Xi Ping represent the “progress fundamentalists” and the world of “business as usual”. In the context of the growing consciousness and awareness around climate change, these leaders also seem to represent thinking that goes back 50 years.

More than 28% of the Brazilian Rain Forest is burning, with little concern shown or actions taken to prevent it by Bolsinaro. Trump wants more fossil fuel driven “unlimited growth”; so too Narendra Modi whose government is busy dismantling environmental safeguards, built over decades and which however imperfect could in the past delay the destruction of ecology and provide defence to nature, biodiversity and forests in India.

Currently, while undermining India’s long term security, to immediately boost the economy post-Covid-19 and reduce costly imports, 40 new coalfields in some of India’s most ecologically sensitive forests are to be opened up for commercial mining.

Increasing evidence shows, the link between forest destruction and increase in viruses and pandemics. We are losing more forests and disrupting nature, says Katarina Zimmer, writing in the National Geographic.

According to her, “Over the past two decades, a growing body of scientific evidence suggests that deforestation, by triggering a complex cascade of events, creates the conditions for a range of deadly pathogens—such as Nipah and Lassa viruses, and the parasites that cause malaria and Lyme disease—to spread to people”.
(read full story at https://www.nationalgeographic.com/science/2019/11/deforestation-leading-to-more-infectious-diseases-in-humans).

In such a scenario, the UN seems powerless, with most of its economists especially in regions like Asia clinging on like religious fundamentalists to some outdated neoliberal economics much of which has brought us to where we are now. SDGs and “Build Back Better” are just labels applied by these economists “on old bottles” of wine that has almost become vinegar!.

There are no road maps nationally and globally for “sustainable futures” or “build back better”. The latter two are aspirational, what we need is more specific identification of normative pathways like Green Growth and a systems approach to achieve it by normative global public goods organization like the UN and those who work for it. Otherwise we may be back, metaphorically to, “Parachuting Cats into Borneo”.

In the 1950s, when the malaria epidemic was out of control in Sarawak and the adjoining state of North Borneo, now called Sabah, the WHO advised indoor spraying of DDT to control the spread of the malaria carrying mosquitoes. The indigenous people of Sarawak and Sabah live in each village in long houses with thatched roofing that could house as much as hundred families.

The spraying of DDT led to a chain of events such as deterioration of the thatched roofs and collapsing of the roofs which the locals complained about. A WHO team sent to investigate found out that the some of the moth larvae (caterpillars) living in the thatch were able to distinguish the presence of DDT and so avoided eating thatch sprayed with the chemical, whereas their parasites, small chalcid wasps that injected their larvae into the caterpillars, were highly susceptible to DDT, causing their decline and the subsequent increase in caterpillar numbers.

A 50% increase per roof area in caterpillar larvae led to deterioration of the thatch roofs and collapses. Accompanied by the death and decline of cats due to the DDT spraying and the boom in rat population resulted in a double crisis. The latter required new cats having to be parachuted into the area. The whole chain of events, captured in the metaphor, “Parachuting Cats into Borneo” demonstrates how one track thinking devoid of a systems approach could just lead us out of one disaster into another.

Published by Chelsea Green Publishers, the book is offered as a ‘Toolkit of Proven Strategies and Practices for Building Capacity and Creating Transformation’. While the UN and some of their professional economists are advising member states ‘to look for a black cat in a dark room where there is no cat’ and till the UN decides that institutional reform is urgent and gets down to it, we may have to do our own homework for change and change management.

Axel Klimek and Alan Atkisson’s book, have much to contribute in these efforts towards fundamental transformations in thinking that can take us closer to sustainable futures.

* Views expressed are his own and do not represent organizations he has been affiliated or currently affiliated with.

“I feel it coming, a series of disasters created through our diligent yet unconscious efforts.
If they’re big enough to wake up the world, but not enough to smash everything, I’d call
them learning experiences, the only ones able to overcome our inertia”.
Denis de Rougemont, 1977

The Abraham Accord: Will it Bring Peace or Perpetuate Pain in Palestine?