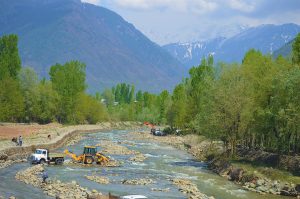 Riverbed mining in Arin, which flows into the Jhelum river via Wular Lake in Kashmir. Courtesy: ThirdPole.net/Athar Parvaiz

Going against its own orders, the government in the Indian Union Territory of Jammu and Kashmir has ordered the fast-tracking of environmental clearances despite manifest evidence of illegal sand mining.

The mining is mostly for sand and rocks used to build houses, roads and so on.

Instead, within a week, the government ordered that environmental clearances be sped up.

Since the auctions, JKEAC has either rejected environmental clearance for 80 riverbed mining plans (and 40 brick kilns) or asked for more information. “This, despite a lot of pressure from top government officials to grant environmental clearances to such projects. They are telling us these approvals are needed promptly as there is dearth of construction material such as sand and gravel for infrastructure,” a member of JKEAC told this correspondent, speaking on the condition of anonymity.

“But we are trying our best not to clear mining projects in haste. There can be a huge environmental catastrophe if we fail to do our duty,” he said. “In a recent meeting, we informed the government that it should either let us work as we are supposed to work by taking the required time for reviewing these proposals or not ask us to review them at all.”

Government goes against its own

Instead, on July 30, the Jammu and Kashmir government issued an order for “fast-tracking of environmental clearance process” for mining operations. It cited “Acute and unprecedented shortage of key material for development works and challenging COVID-19 pandemic” as the reasons for its order.

Local residents had expressed concern before the July 30 order was issued. “This is an environmental catastrophe in the making,” said Ashiq, who lives close to the Farozpora river, in the Tangmarg area of Baramulla district in north Kashmir. “In our area, they are operating without any environmental clearances just because they have emerged successful during the bidding process.”

The rule says if a company wants to mine more than five hectares in a riverbed, the authorities are supposed to hold public hearings before clearing the plan. Over 70% of the blocks auctioned are over five hectares, but hardly any public hearings have taken place. Delayed by the Covid-19 pandemic, JKEAC is still processing the applications. But the mining is going on; in fact it has accelerated in the lockdown caused by the pandemic, because few officials are on the ground to check.

“We had advised the government during a meeting in December last year that no mining should be allowed in Jhelum and other rivers till there is a basin-wise scientific mining plan as to which areas should be declared feasible for mining and which areas should be declared as river sanctuaries. It should not be done in a hotchpotch manner,” the JKEAC member said. “Any mining has to be done in a way that it doesn’t cause problems in flood management or functionality of water bodies.”

In recent years, Kashmir has faced many floods, notably the devastating floods in 2014 which killed hundreds of people.

In South Asia, especially in India, there are reports galore about illegal mining in riverbeds and some reports about killing of law enforcement officers, journalists and environmental activists.

A petition filed in India’s National Green Tribunal (NGT) said that due to the lockdown forced by Covid-19, illegal sand mining was going on even in officially protected areas in the north Indian state of Uttar Pradesh. On June 30, the NGT set up a panel to prepare a report on it.

Kiran Pereira, founder of the London-based website Sand Stories, has been working on sand mining since 2010. She said illegal sand mining in South Asia is particularly serious because of the nexus between builders, politicians and the “sand mafia”.

Adding that there are lots of claims from governments that enough is being done in terms of legislation, Pereira added, “Legislation is of no use unless it is implemented. Monitoring and enforcement need to be strengthened.”

The United Nations Environment Programme, Pereira said, has called this problem “one of the major sustainability challenges of the 21st century”. Sand is a non-renewable resource and fundamental to create concrete and glass, both of which are used in great quantities wherever construction is high on the agenda.

Activists have been trying to stop the practice. GD Agarwal, the doyen of India’s river experts, died in 2019 after a 111-day hunger strike – one of his demands was to put a stop to illegal riverbed mining.

In 2017, the Uttarakhand High Court declared Ganga and Yamuna “juristic/legal persons/living entities having the status of a legal person” and banned mining in their beds. The government went to the Supreme Court against the order. The Supreme Court set aside the High Court’s order, deeming it unimplementable.

A UN report in 2019 said, “Sand extraction operations in emerging and developing economies are not in line with extractives and environmental management regulations. Resulting social and environmental impacts have been reported in India, China, and other locations across Asia, Africa and South America.”

Sand mining is linked to many changes in ecological structure, processes and biodiversity of freshwater systems, including habitat loss and degradation, reduction and changes to the diversity and abundance of macro invertebrate and fish populations, increased viability of invasive species, changes to food web dynamics, reductions in water quality and groundwater levels, and alterations to riparian processes.

According to research published by the Centre of Mining Environment, at the Indian Institute of Technology in Dhanbad, the large-scale extraction of streambed materials, mining and dredging below the existing streambed, and the alteration of channel-bed form and shape lead to several impacts such as the erosion of channel bed and banks, increase in channel slope, and change in channel morphology.

The 2019 UN report said, “Large-scale multipronged actions are urgently needed to implement technical and institutional innovations designed at the scale of regional infrastructure projects, large river basins and their downstream connections to deltas and coasts and global construction materials markets.” This, it said, “will need to involve a wide range of players – public, private and civil society organisations – from local to global levels.”

The report emphasised identifying sand sources that may be harvested at a sustainable level and according to guidelines, and with the support of agreed standards, best practices and decision-support tools, that are developed with inputs from all stakeholders.

This story was originally published on thirdpole.net and can be found here.