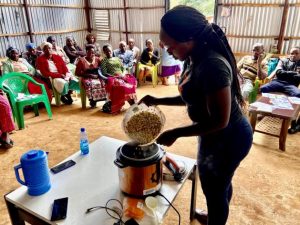 The Sustainable Development goals on energy speak clear: universal access energy and clean cooking by 2030 (SDG7). But the current efforts are still lagging several steps behind the specific needs of the communities and are not enough to achieve energy access for all, especially clean cooking solutions.

Numerous studies have been done and plans have been developed how to do this, but most of them have overlooked people and their needs. The energy transition affects daily lives and we cannot ignore those who are potentially on the receiving end of these interventions.

We know that people can provide better guidance on how to move forward. This can be achieved by asking people themselves how they see this transition to clean cooking, how this would affect their habits and traditions, who can drive this change, and how they can actively promote it

We see a big gap between the sustainable objectives and the reality on the ground, and we know that people can provide better guidance on how to move forward. This can be achieved by asking people themselves how they see this transition to clean cooking, how this would affect their habits and traditions, who can drive this change, and how they can actively promote it. And this inclusive process should start now.

Indeed, despite the progress and the essential role of clean energy services to spur socio-economic development, approximately 2.8 billion people lack access to clean fuels and technologies for cooking.

Access to clean cooking solutions remains particularly challenging in Sub-Saharan Africa, where progress has barely kept pace with population increase. Almost four million of people die every year for causes attributable to indoor air pollution, as reported by the World Health Organization (WHO), and most of them use traditional cooking fuels like firewood, charcoal and kerosene.

The COVID19 pandemic has stressed the fragility of the current socio-economic system, revealing the profound existing inequalities and questioning the pace of the efforts in achieving universal clean cooking access.

Electric cooking has proven to be a cost-effective and feasible alternative, but a long-term successful energy transition must also address social impacts, behavioral and cultural factors.

These factors may be a barrier to the cooking transition, which should be dynamic and supported by other collateral needs, such as wider electrification in the communities. Scaling up these technologies requires a strong political will, targeted investments and policies, but also a better understanding of the socio-cultural aspects of cooking, such as taste, cooking practices, cultural norms, and gender roles.

In Kenya, a group of people who currently do not have access to clean cooking technologies has been asked to plan a transition to clean and 100% electric cooking. The group explored ways to reach this.

During work sessions, the villagers use “backcasting” as methodology to explore possible pathways. In their view, the transition to electric cooking would not change food habits but would improve family safety and health.

It is also seen to leverage changes in the gender roles by relieving women of some of the household burdens, reducing the amount of time required for collecting fuels and doing chores, and allowing them to pursue income-generating opportunities, such as selling cakes and cookies.

The community envisions this change to be linked with access to a broader range of electrical appliances associated with modern living, and most of all they consider the community itself as a driver of change.

The backcasting research with the Kenyan community showed once again that the clean cooking transition should start by empowering villagers, by supporting early saving and working with early adapters, and by building the know-how and confidence to engage with  government entities to access key services.

NGOs can play a crucial role in introducing new cooking transition technologies, demonstrating mini grids and training communities, but the community and specifically the early adopters of these technologies are those who can make this change real.

Governments and development partners, in turn, are called upon to spur progress on multiple levels, from public services and large-scale infrastructure to full electrification, to improved education and health facilities. All these sectors are profoundly interlinked and require cross-sectoral cooperation.

Our study in Kenya with the Stockholm Environment Institute (SEI) shows that people can imagine, envision and plan for a clean cooking future beyond fire. Once set goals, and given the technologies, fuels and finance availability, we have to make sure that investments are channeled into well-targeted measures that enable people in driving this change and make it happen.

Our study is an initial step towards stressing the need of building a knowledge on the behavioral and cultural aspects of transitions to cooking with electricity.

Governments and donors must consider the household and community perspective, how the transition to electric cooking is perceived locally, and take actions based on the role and responsibilities of various actors engaged in the system, from the household to civil society.