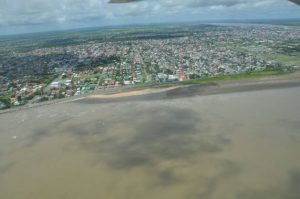 Just over five years ago, a major oil discovery occurred on the northeastern coast of South America. There have been a series of additional discoveries ever since. But this time it was not Venezuela. It was Guyana.

Fast forward to August 6 when Irfaan Ali assumed the presidency. The country had been plunged into a political crisis since its March election and allegations of fraud.

The situation had become dire and sanctions were levied against the former government of David Granger. As the new government reviews its policy and regulatory frameworks, there is, in our estimation, what could be called a not-to-do list when it comes to oil governance.

The well-known and hugely studied resource curse has confronted countries such as Venezuela for decades. In many cases, significant natural resources correlated with depressed development as other sectors are neglected and currency appreciates causing uncompetitive exports

Given the major oil discoveries, political instability was problematic for the economic outlook and development of the nation. It was particularly acute for managing the oil resource and income on the horizon.

Earlier this year, oil was commercialized from the Liza field. With that milestone, solving the political crisis was essential in order to allow the new administration to grapple with the key oil governance challenge and the what, where and how they should focus when it comes to the emerging oil sector.

Guyana need only look to its neighbor Venezuela to see the perils of abundant oil resources. The well-known and hugely studied resource curse has confronted countries such as Venezuela for decades. In many cases, significant natural resources correlated with depressed development as other sectors are neglected and currency appreciates causing uncompetitive exports.

It bears noting that even before the political crisis, Guyana received a host of international experts, institutions and donors eager to dispense advice as to how to avoid the grim fate of the resource curse. But as much of the literature illuminates, many of the recommendations are easier said than done.

For example, economic diversification and rooting out corruption are excellent and obvious ideas that many larger and more prosperous countries have failed to achieve.

So, back to our not-to-do list that we feel contains five feasible, actionable ideas for the Ali administration.

First, avoid overinvestment in the oil and gas industry. While there should be adequate infrastructure for drilling and shipping the oil, the country should resist the urge to move downstream of the wellhead. Any refineries built would likely be deeply unprofitable.

For context, the last new refinery in the United States was built in 1977, as refining is a high cost venture that can take many years to turn a profit. Additionally, most energy economists point to an oversaturation of global refining capacity, especially as many people are looking to decrease their use of fossil fuels. This truism has been deepened by the impact of COVID-19 on the global fuels market.

The previous administration in Guyana hired a consultant who determined building a refinery would cost around $5 billion and not generate significant revenue to outweigh expenses. In addition to the cost issue, a refinery built before the state has enacted proper oversight and regulatory agencies could become a vehicle for corruption and crony capitalism. Look no farther than another neighbor, Brazil, as to the pratfalls of this issue.

Second, do not subsidize gasoline. In Latin America, an abundance of oil has led to a sense of resource nationalism, causing citizens to view gasoline as a public good rendered nearly free by government subsidies.

There are many cautionary tales that demonstrate the folly of this logic, with the most drastic in Venezuela, but also the recent example of Ecuador. These extreme subsidies are not sustainable and are nearly politically impossible to remove once they become expected by the people. Moreover, as economists around the world intone: they can be quite regressive.

While a gasoline subsidy can, in the short term, provide a quick jolt of economic growth to a developing country, it is not worth the long-term debt. To avoid the future need for the IMF and possible citizen uprisings, Guyana should keep gasoline at market value.

Thirdly, and perhaps not a typical theme to consider: Do not turn away dual citizens. Transitioning a largely agricultural country into the world’s newest oil nation requires significant technical expertise and talent.

Given Guyana’s small population, this can be hard to find. Fortunately, Guyana has a large diaspora across the globe comprised of individuals with experience and ability.

The government should appeal to its far-flung citizens to return home and share in the newfound opportunities. While this seems obvious, there is a pervasive nationalistic pride that makes accepting dual citizenship difficult.

For instance, it is illegal to be a member of the Guyanese parliament while holding dual citizenship. Several Guyanese politicians recently had to make the choice to either step down or renounce their foreign citizenship after the High Court of Guyana reaffirmed the restrictive law.

This type of nationalism cultivates the exact nature of policy that could hinder the success of Guyana. In order to benefit from its rich oil resources, the country needs individuals with the best education and diverse experiences working not just as engineers in oil companies, but also serving in the government.

Insulating industry and governance from foreign influence is a path to incompetent organizations and increased risk of corruption.

Historically, the associated gas in offshore oil projects was not necessarily a valued commodity and other than some uses for reinjection was more often than not flared, or burned off, given that the real value was in the oil being produced.

Major developments around the use of natural gas as a cleaner burning power generation source, as well as the importance of avoiding flaring for emission and environmental reasons point to an obvious win-win for Guyana to monetize the associated natural gas primarily for use in power generation.

Moreover, the newfound power generation source would greatly complement a largely hydroelectric power system and one that is currently expensive and in need of enhanced reliability.

Lastly, do not encourage delusions of grandeur. After ExxonMobil discovered the first massive oil field, an expectation developed of great, and fairly immediate, wealth derived from the offshore discoveries.

While there will be significant economic development and by extension the opportunity to attain greater wealth derived from the oil resource, the average citizen will most likely not see an immediate large-scale change in their circumstances. The government needs to convey this reality to the people in order to keep expectations accurate and of a realistic timeline.

When the population is anticipating wealth that may not occur on the level or timetable perceived, the simmering displeasure with government could lead to unrest and destabilizing protests.

The reality check and need to manage expectations, while politically unpopular, will also help to ensure for the population that governance of the oil wealth is wise, long-term and not one of associated with the expectation of a rapid, endless financial windfall and deluge of funds.

Hopefully, Guyana will be able to use the bevy of outside advice it is receiving to turn its resource curse into a resource blessing. At least with these ideas there are a few items to cross off its to-do list.

Jeremy M. Martin is Vice President, Energy and Sustainability at the Institute of the Americas at the University of California San Diego.

Kathryn Hillis is a second year graduate student at the School of Global Policy and Strategy at the University of California San Diego and an intern at the Institute of the Americas.

The post A Not-To-Do List for Guyana’s New Administration When It Comes to Oil appeared first on Inter Press Service.

Mayan Train Threatens to Alter the Environment and Communities in Mexico