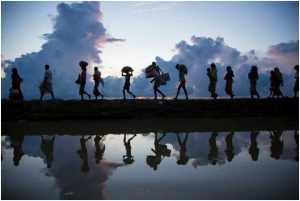 Credit: Office of the UN High Commissioner for Refugees (UNOHCR).

The populations with the largest percentages wanting to emigrate are generally found in poor and violence ridden countries. In many of those nations, half or more of the populations say they would like to migrate permanently to another country, typically to Europe and North America. For example, more than 60 percent of the populations in Sierra Leone, Liberia and Haiti want to emigrate (Figure 1). 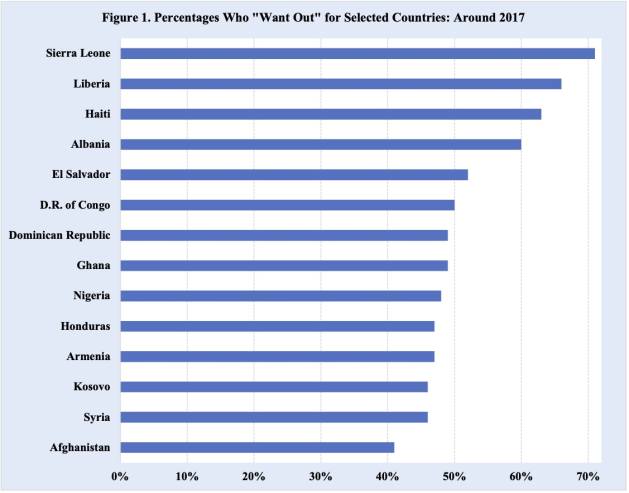 Source: Gallup Polls 2018; percent who said they would like to move permanently to another country if they had the opportunity.

In Nigeria, the most populous country in Africa, about half of its population of more than 200 million people want out of the country and to resettle abroad, preferably in an English-speaking country. With 40 percent of the population living in poverty, many Nigerians have already left the country through immigration programs and illegal migration and many others have applied for asylum and refugee protection.

In Afghanistan nearly half of the women say they would leave the country permanently if they could. With limited educational, employment and participation opportunities, Afghani women are the least satisfied women in the world with regard to the freedom to choose what they do with their lives

Nigerians had more pending refugee protection claims in Canada in 2018 than any other country globally. The overstaying on a visitors’ visa in the United States led to a clampdown by the Administration on US visas for Nigerians. Also, the European Union has warned Nigeria about imposing restrictive visa rules on that country if it failed to co-operate in the readmission of Nigerian citizens deported from EU member countries.

In Afghanistan nearly half of the women say they would leave the country permanently if they could. With limited educational, employment and participation opportunities, Afghani women are the least satisfied women in the world with regard to the freedom to choose what they do with their lives. The difficult lives of Afghani women are likely to worsen if the Taliban, which banned girls from schools and women from public life, retakes control of the government.

The desires of hundreds of millions of men and women who want out of their countries and to settle in another are influenced by a broad range of economic, social, political and environmental factors. Those critical factors interact to produce powerful push and pull forces that operate in origin and destination countries, respectively.

Living conditions in migrant-origin countries are typically difficult and harsh, and have worsened considerably in many regions due to climate change, environmental degradation and more recently the coronavirus pandemic. Housing is typically substandard, educational opportunities are limited, health care is often lacking and many households struggle at subsistence levels.

Violence, armed conflict and human rights abuse also contribute to people’s desires to want out. Consequently, in addition to the large numbers of irregular migrants overstaying their visitors’ visa, many men, women and children lacking legal authorization to emigrate are willing to risk their lives to reach their desired destinations by any means, including crossing seas in flimsy boats, walking across deserts with limited provisions and hiding in poorly ventilated trucks, with some dying in their failed attempts.

In contrast to migrant-origin countries, life in the migrant-destination countries is a comparative dreamland, offering a wide array of opportunities, freedoms, rights, safeguards and security. Also, and increasingly important, potential migrants are convinced that emigration will greatly improve the chances for better and more secure lives for their children in the future.

Over the recent past the destination countries where potential migrants say they would like to move have generally remained the same wealthy developed nations. The most desired destination country, where one in five potential migrants would like to move, is the United States. In a distant second place is Canada, followed by Germany, France, Australia and the United Kingdom.

In general, those wanting to emigrate are located mostly in comparatively poor developing countries where the populations are struggling with poverty, violence and human rights abuse. The countries where much of the public want to keep others out are found in both developing and developed regions (Figure 2). 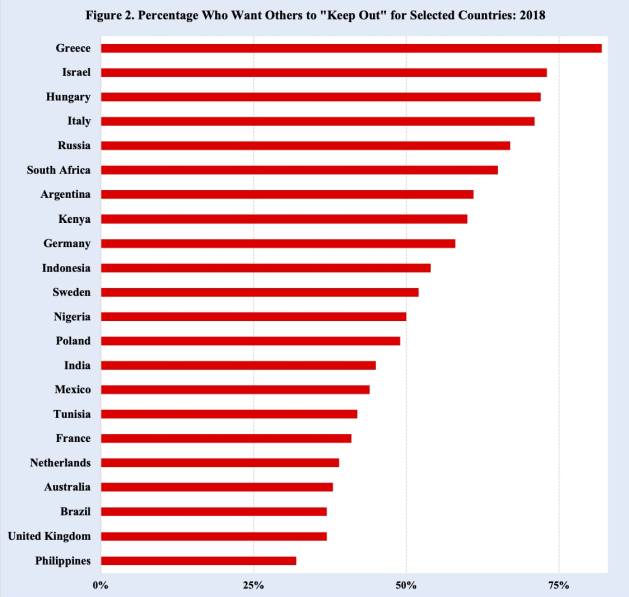 Source: Pew Research Center; percent who said fewer or no immigrants should be allowed to move to their country.

Countries with the largest percentages of the public wanting fewer or no immigrants to be allowed to move into their country are Greece (82 percent), Israel (73 percent), Hungary (72 percent) and Italy (71 percent). Significant percentages of the public in large migrant-sending developing countries who also want fewer or no immigrants settling in their country include Nigeria (50 percent), India (45 percent) and Mexico (44 percent).

In addition to the effects on wages, unemployment and economic opportunities as well as increased social costs, many opposing immigration are concerned that immigration will adversely affect their traditional culture, shared values and national identity. They feel that immigration and multiculturalism undermine their conventional way of life, national security and social solidarity, which needs to be protected from the detrimental effects of foreign influences.

Opposition to immigration is reflected in the rise of xenophobia, racism, hostility and violence toward immigrants. Far-right political leaders, ethnonationalists and nativists often depict migrants, refugees and asylum seekers as invaders, infiltrators, criminals, rapists and terrorists, and call for them to “go home and stay home”. More recently, some populist parties are also using the coronavirus pandemic to stoke anti-immigrant fears by labelling immigrants as disease carriers.

The Great Migration Clash is complicated by the asymmetry of migration-related human rights. While everyone has the basic human right to leave their country and return, they do not have the right to enter another country.

The numbers of asylum claims have increased rapidly in recent years. In the United States the number who claimed asylum and had their cases reviewed jumped from 5 thousand in 2007 to 92 thousand in 2016.

Asylum applicants in the European Union increased from 255 thousand in 2008 to a high of 1.3 million in 2015. While in principle people have the right to seek asylum, in reality many governments are trying to prevent, discourage and complicate the growing attempts of men, women and children to cross into their territories and claim asylum.

Since the 1951 Convention Relating to the Status of Refugees was adopted, world population has tripled from 2.6 billion to 7.8 billion, with more than 90 percent of that growth occurring in developing countries.

Over the next three decades world population is expected to add another two billion people. Virtually all of that future demographic increase will take place in developing countries, with Africa alone accounting for 60 percent of it and some twenty countries in that continent at least doubling in population size by 2050.

It is evident from even a cursory look at population trends that the supply of potential migrants in developing countries greatly exceeds the demand for migrants in developed countries. Consequently, increasing numbers of men, women and children who want out of their countries are resorting to irregular migration, with many relying on the services of smugglers and some turning to traffickers.

In response, most migrant-destination countries are resisting the entry of irregular migrants, attempting to repatriate those who are resident unlawfully, raising objections to accepting refugees and increasingly denying asylum claims. The recent political rise of right-wing populist and nativist parties and their increased representation in governments across virtually all major regions reflect the centrality of immigration issues worldwide.

Are politically feasible measures available that could effectively address the Great Migration Clash? Unfortunately, despite regional and international efforts including the recently adopted Global Compact for Safe, Orderly and Regular Migration and Global Compact on Refugees, the answer appears to be not at the moment.

The Great Migration Clash is intensifying, especially with the disastrous economic fallout of the coronavirus pandemic, which is hitting the poorest countries the hardest. Powerful forces, including demographics, climate change, poverty, hunger, violence and armed conflict, are continuing to fuel the worldwide migration struggle.

Governments sidestepping the struggle between those who “want out” of their countries and those who want others to “keep out” of their countries is a common policy response. To have a reasonable chance at resolving the struggle, nations working together in collaboration with regional and international organizations need to increase their efforts to implement strategies, policies and programs that effectively address the powerful forces fueling the Great Migration Clash.

Joseph Chamie is an independent consulting demographer and a former director of the United Nations Population Division. 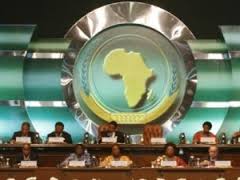