On Friday the 24th of June, President Trump announced he was skipping a weekend at his New Jersey golf resort to ”ensure law and order in Washington”, tweeting:

I just had the privilege of signing a very strong Executive Order protecting American Monuments, Memorials, and Statues – and combatting recent Criminal Violence. Long prison terms for these lawless acts against our Great Country! 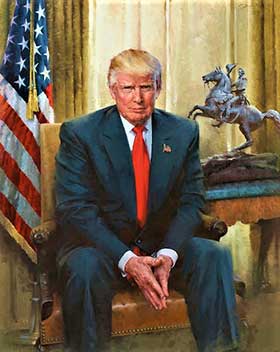 This time, Trump acted with remarkable speed and much more decisively than he had ever done when it came to denouncing racism, or mitigating the COVID19 pandemic. What angered him was an intent to topple over an equestrian statue in Washington, on Monday 20th of June.

President Trump was already incensed by the tearing down of statues and monuments all over the country. Fuelled by the police killing of George Floyd on May 25, people expressed their anger and frustration by vandalizing and destroying monuments – so far almost two hundred have been destroyed, disifigured, or taken away. Similar incidents occur in other areas of the world, where monuments erected to honour racists, colonialists and abusers of native populations are being destroyed, or removed.

seek nothing more than to destroy anything that honors our past and to erase from the public mind any suggestion that our past may be worth honoring. President Trump will never allow violence to control our streets, rewrite our history, or harm the American way of life.

Trump labelled the monument wreckers as left-wing extremists, ”who identify themselves with ideologies – such as Marxism” and are endowed with a ”deep ignorance of our history”. Such a statement makes one wonder what history Trump is talking about. It must be some kind of home-made construction in accordance with a statement he made in his fourth of July speech in front of Mount Rushmore:

Our nation is witnessing a merciless campaign to wipe out our history, defame our heroes, erase our values, and indoctrinate our children.

What values? The vandalization of memorials began as a protest against homages to Confederate heroes. The American Civil War (1861-1865) was fought between northern states loyal to the Union and southern states, which in an effort to maintain slavery had broken loose to form The Confederate States of America. After the war, most supporters of the defeated Confederacy realized that it made little sense to argue that slavery and oppression of people of a darker complexion had been a just cause to die for. Instead, the war was recast as a battle over the principle of states’ rights and Southern honour. It was lamented that the children of brave soldiers instead of revering their fathers had to be ashamed of what they had done.

To unite the nation, the victorious U.S. Government was willing to appease the vanquished and allow them to continue discriminating against people with a different skin colour, while denying them their constitutional rights. Furthermore, it gave free reigns to local chapters of the United Confederate Veterans, United Daughters of the Confederacy, and Sons of Confederate Veterans to fund and erect monuments paying homage to men who had fought for the preservation of slavery and preached inequality of human beings. Their statues and monuments now embellish parks and squares all over the U.S., an honour they occasionally share with killers of the native population, from Juan de Oñatre (1550-1626) and onwards.

It is not difficult to imagine the rancor felt by ”coloured” people while being confronted with statues praising the heroism of white oppressors. They live in a society that not long ago (and often still do) characterized them on the basis of their skin colour. As Ralph Ellison wrote in his novel Invisible Man from 1952.

I am an invisible man […] I am a man of substance, of flesh and bone, fiber and liquids – and I might even be said to possess a mind. I am invisible, understand, simply because people refuse to see me […] When they approach me they see only my surroundings, themselves, or figments of their imagination – indeed, everything and anything except me.

Trump declared that the highly visible statues of white murderers and chauvinists are among ”our most sacred memorials”. When the U.S. president affirm this as a fact I wonder if he for one second has contemplated what it means to be the descendant of victims of such ”heroes” and confronted with tangible tributes to these ruffians. Trump would probably not condemn the toppling of Saddam Hussein’s statue by U.S. troops. He might not disapprove of the fact that hundreds of thousands of statues of Hitler and Stalin were destroyed all over Europe, since people could not stand being confronted with images of such tyrants.

I am not shedding any tears over recently destroyed, or removed, statues representing bullies and profiteers of slave trade and forced labour like Cecil Rhodes, Edward Colston, Robert Milligan, John Cass, Leopold II of Belgium, John Hamilton in New Zealand, or some offensive colonialists in India, who now join ranks with Hoxha, Marcos, Gaddafi, Lenin, and other toppled heroes.

However, statue smashing remains a thorny issue, particularly since representations of controversial, but to a great extent beneficial personalities like Winston Churchill recently have been vandalized, as well as those of generally admirable persons like Gandhi and Frederick Douglass. The right thing would probably be not to destroy any statues at all, and when it comes to the worst tyrants and murderers follow the motto of Indiana Jones, namely that they ”belong in a museum”.

Monuments dedicated to great women and men are often erected after their deaths in remembrance of good deeds and the admiration they fostered. Worse is when dictators and vainglorious men erect monuments in their own honour, like the dictator Rafael Leónidas Trujillo who besides having the highest mountain peak and the capital of the Dominican Republic named after himself, succeeded in entering Guinness Book of Records due to the fact that he during his lifetime had more than 2,000 statues and busts of himself erected in public places. I am somewhat sceptical to that record, assuming that Stalin and Mao Zedong were far superior champions in that particular area of self-glorification.

Another manner of glorifying a living person is to commission her/his portrait and hang it in a public space, an honour generally bestowed upon business leaders and heads of state. One example of this tradition is the official portraits of U.S. presidents, generally loaned from the National Portrait Gallery and hung in the White House. Some controversy arose when Donald J. Trump refused to bring the official portraits of his predecessor Barak Obama and his wife to the White House.

Trump has not yet decided who is going to paint his official White House portrait, though he was recently portrayed by one of USA´s highest paid portrait painters, John Howard Sanden, who painted the official portraits of George W. Bush and his wife Laura, which are ably executed but nevertheless quite bland. Sanden’s portrait of Trump was finished in August 2019 and intended as a homage to a president the artist admires:

I am grateful for the President’s strong pro-life policies, and he sees a need for Christians to defend and proclaim Biblical truth as the culture celebrates immorality in a way that would have seemed inconceivable 50 years ago. Somebody’s got to take a stand for the Lord because we’re going down the tubes.

When I quite recently saw Sanden’s portrait of Donald J. Trump I was struck by the details in the background. On his website, John Sanden describes his painting:

The President wears his signature red tie and dark suit and sits in an attitude of thoughtful determination, an expression well-known to all Americans. Just behind the President´s chair is the American flag, the honoring of which has been a central theme of his Presidential leadership.

As a matter of fact, the Stars and Stripes does not appear in any of the White House´s presidential portraits, but the most curious prop is a miniature of the bronze statue of President Andrew Jackson that occupies the center of Lafayette Park, opposite the White House. The inclusion of Jackson’s equestrian statue in a portrait of Trump now seems to be almost prophetic. As mentioned above, an effort to topple the statue was made on the 6th of June and perpetrators have been charged for attempting to ”destroy federal property”. They will thus be the first offenders charged according to Trump’s new directives and thus run the risk of being condemned to ”up to ten years of imprisonment for lawless acts against our Great Country.”

Why did they try to demolish Andrew Jackson’s statue? Probably because Jackson was a plantation owner who also owned a cotton cleaning factory, and an adjoining whiskey distillery, operated by 150 slaves. One of Jackson’s most controversial decisons was his enforcement of the Indian Removal Act, which allowed for the forced expulsion of indigenous peoples from their ancestral lands. Approximately 45,000 Native Americans were forcibly displaced during Jackson’s presidency. His policies were continued by his successor Martin Van Buren, when an already planned ”relocation” of Cherokees was initiated, about 4,000 men, women and children died during this so-called Trail of Tears. The anger against the Andrew Jackson´s memorial might thus be understandable, though in its defence it may be said that is not at all a bad piece of art. What is incomprehensible, however, is why the ”historically conscious” Donald J. Trump has chosen to have a replica of it as a background for his portrait.