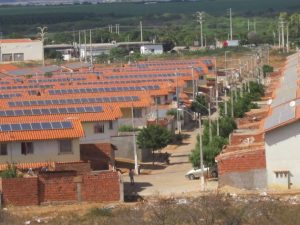 A total of 9,144 solar panels were installed on the rooftops in this complex for a thousand poor families, on the outskirts of Juazeiro in the Northeast Brazilian state of Bahia. The system had a distributed generation of up to 2.1 MW, leaving a surplus whose profits were used for the community and its members. But it was not used until 2016, three years after it was installed, by decision of the regulatory authority. CREDIT: Mario Osava/IPS

Solar energy has continued to expand in Brazil during the COVID-19 pandemic and should contribute to the economic recovery in the wake of the health crisis.

That is the assessment of Bárbara Rubim, vice-president of the Brazilian Association of Photovoltaic Solar Energy (Absolar), in charge of distributed generation.

“The pace of growth has slowed down a bit, but it is still exponential,” she said. “The pandemic has had a smaller effect than was expected and the installed power increased 30 percent in the first half of 2020.”

The total potential was 5,918 MW on Jul. 2, up from 4,533 MW at the end of 2019, according to official data from the National Electrical Energy Agency (Aneel), the energy regulator in this South American country of 211 million people.

This is a small amount in a country with a total capacity to generate 172,709 MW.

But solar energy is the fastest growing source of energy, in line with the global trend.

Brazil was a late bloomer when it came to harnessing the enormous solar potential in its vast territory. The initial push came in 2012, when the country adopted rules that encourage distributed electricity generation, also known as decentralised generation because it is based on many small sources.

This coincided with the sharp drop in the cost of installing solar panels, which played a decisive role in the boom in recent years.

But this South American nation lags far behind the foremost countries in the development of this energy source, led by China, which added 30,000 MW last year to end 2019 with 205,700 MW of solar energy, according to the International Renewable Energy Agency (IRENA).

This intergovernmental institution estimates that each installed MW generates 25 to 30 new jobs.

In Brazil, the expansion led to the creation of 37,000 jobs in the last semester, a period in which unemployment rose across the board due to the arrival of the SARS-CoV-2 coronavirus in late February.

The initial forecast of generating 120,000 jobs this year has become more unlikely but has not been ruled out, according to Absolar. 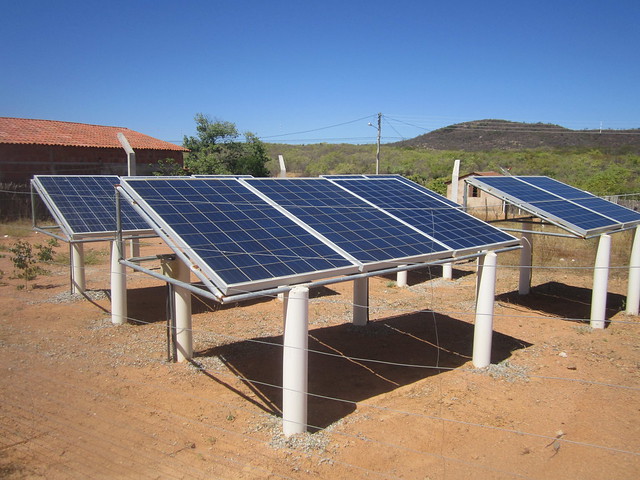 Solar panels generate electricity to pump water to a tank on a neighbouring hill and to supply water by gravity to 120 families in a neighbourhood in Aparecida, a city in the state of Paraíba, in Brazil’s semi-arid Northeast. CREDIT: Mario Osava/IPS

The industry had already proved its counter-cyclical nature by growing during the economic recession that hit Brazil in 2015 and 2016.

“In the crisis, people choose products that allow them to save money,” explained Frank Araújo, a solar energy businessman in Sousa, a city of 70,000 in the Northeast state of Paraíba.

Generating your own electricity is good business: the savings on the electric bill cover the initial investment in just a few years, said the owner of Ative Energy, which installs solar plants in dozens of cities in the Northeast region of Brazil.

His company’s turnover fell by 25 percent after the start of the pandemic, in April and May, but it rallied in June, he said.

“Some companies postponed their investments, out of caution until the economic situation becomes more clear,” he told IPS by phone from Sousa. “That happened mainly in the case of industries, but not in the case of pharmacies and supermarkets, which managed to maintain or expand their sales.”

At a national level, Rubim said the largest expansion of solar energy was in the commercial sector, keen on cutting energy costs, as well as among residential consumers.

Rural residents and businesses also invested heavily in this energy source, increasing their generating capacity by 120 percent in the first half of 2020, compared to the same period in 2019, said Rubim, who is also director of Bright Strategies, a renewable energy consulting firm.

This is because rural energy has become more expensive due to the gradual reduction of a discount they enjoyed on the electricity tariff. In addition, rural producers tend to seek “synergies” to make more efficient use of the land, Rubim said in a telephone interview from São Paulo.

According to her analysis, the pandemic will favour renewable sources, especially solar, by reducing costs, including maintenance, and because it will drive up the price of electricity supplied by the distribution companies.

Consumers will have to pay at least part of the so-called “COVID bill” – a bank loan arranged by the government to help the power industry overcome the losses suffered in the face of falling energy demand due to the pandemic.

The loan aims to spread over five years the increase in energy tariffs that would otherwise affect consumers in one fell swoop. However, it will cause an additional cost that will make solar energy more attractive, Rubim hopes. 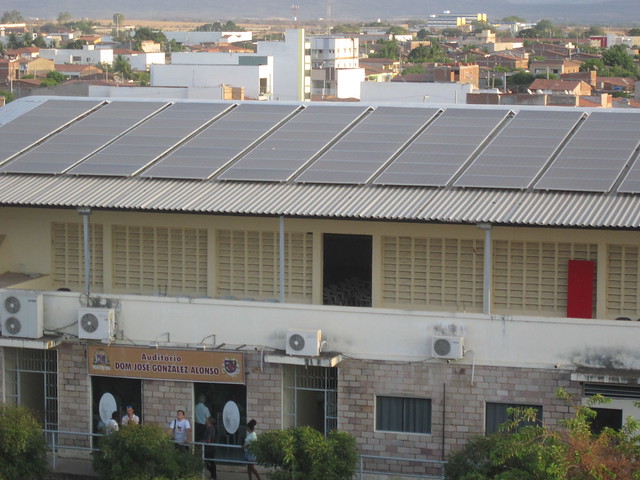 Solar panels were installed on the roof of the building of the Catholic Archdiocese in the city of Sousa, which houses administrative offices, an auditorium and a sports field. The electricity generated allows the “solar archdiocese” – as it has been dubbed – to save almost all energy costs and thus expand its social work in the municipality of 70,000 inhabitants in Brazil’s Northeast region. CREDIT: Mario Osava/IPS

In addition, interest rates have fallen during the crisis, making it cheaper to provide the necessary credit for investments in solar plants, which are also favoured by greater sensitivity to environmental and climate problems.

Distributed generation, installed by its own consumers, has grown the most in Brazil in recent years. At the end of June, output reached 2,987 MW, three times higher than the previous year, and exceeded by 0.02 percent the output of large commercial plants.

The state of Minas Gerais, in the southeast of the country, is the leader, with 594 MW of installed power, 19.9 percent of the national total.

The state’s leading position highlights the importance of public policy, Rubim said. In 2013 Minas Gerais adopted the tax incentives, two years ahead of the other 26 Brazilian states.

It also pioneered the authorisation of units of up to five MW for multi-consumer shared generation, a formula allowed by Aneel since 2015.

Solar panels are also disseminated throughout the country for social and environmental reasons.

Sonnenhauss, a company located in João Pessoa, capital of the state of Paraíba, offers training and consultancy, in addition to installing solar energy systems and promoting projects.

Currently, it is installing 13 units in the interior of the state to serve rural communities. The idea is to pump water, in one case to supply 200 families and in others to implement irrigation systems for agricultural production and to promote a fruit pulp factory.

“In addition to the installation, we offer training to local personnel for the maintenance of the equipment and support at all levels,” Manoel Alves, one of the company’s electrical engineers and a professor at the Federal Institute of Paraíba, told IPS from that city.

In the same state, based in Sousa, the Semi-Arid Renewable Energy Committee (Cersa), a group of activists, has already promoted the installation of solar systems in several Catholic dioceses, schools and rural communities.

The “More Light for the Amazon” programme, created by the Brazilian government in February, aims to bring clean, renewable energy to some 300,000 people living in isolated communities that still lack electricity.

“The source will basically be solar, because of the ease of implementation, the low cost and the feasible maintenance, including by trained local residents themselves,” said Joilson Costa, coordinator of the Front for a New Energy Policy for Brazil, which brings together 31 social, environmental and academic organisations.

In the southern state of Paraná, the regional government decided to adopt solar energy in the 5,500 municipal schools in the state, beginning this year with 224 schools in seven municipalities.

The post Solar Energy Expands in Brazil Despite the Pandemic appeared first on Inter Press Service. 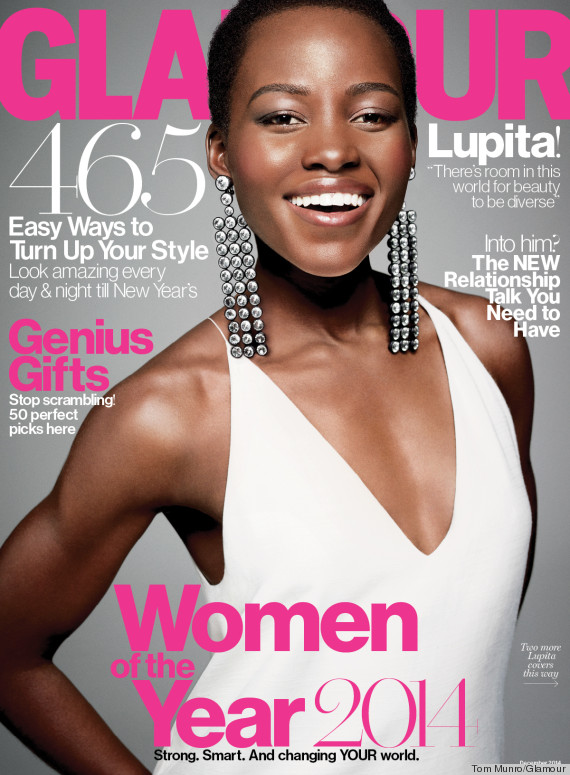 Dozens of migrants die on boat in Mediterranean