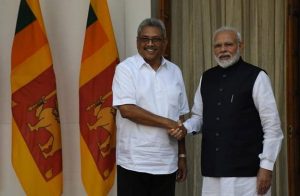 The unique India-Sri Lanka relationship, de jure, is between equals as sovereign nations. But it’s asymmetric in terms of geographic size, population, military and economic power, on the one hand, and social indicators and geographical location, on the other. It is steeped in myth and legend, and influenced by religious, cultural and social affinities.

This is an opportune time for Sri Lanka and India to nourish the roots of the relationship using modern toolkits, but leveraging age-old wisdom and experience.

History reveals that the advent of Buddhism to Sri Lanka during the time of Emperor Ashoka was the result of cross-border discourse. For many centuries in the first millennia, the ancient capital city of Anuradhapura housed an international community which included traders from India, China, Rome, Arabia and Persia.

The Indian freedom struggle had its influence on Sri Lanka as well. There was cross-border support for the revival of culture, tradition, local languages, spiritual practices and philosophies, and education. Both countries transformed into modern nations with constitutional and institutionalised governance under colonial rule.

Most aspects of today’s globalisation existed in a different form in the pre-colonial era with free exchange of ideas, trade and intellectual discourse. However, process engineering by colonial powers for identification and categorisation of people was a factor in the emergence of separatist ideologies based on ethnicity, language and religion.

This mindset is now ingrained and accentuated in politics. Episodic instances of communal hostility are referenced often to suit tactical political gain. Around the world today, and not just in South Asia, policies and thinking are becoming communally exclusive, localised and inward-looking.

The COVID-19 pandemic hit the world against this backdrop, allowing some leaders an opportunity to double down on insular thinking, ostensibly for providing local communities with better economic and social prospects, and security.

In this regard, the people of Sri Lanka and India have been served well by long years of uninterrupted democratic governance. This has provided long-term stability for both countries and must not be vitiated.

Sri Lanka’s strategic location makes it apparent that not only economic fortunes but the security of both countries are inextricably linked. Therefore, it is heartening that India and Sri Lanka constantly strive for excellence in neighbourly relations, recognising that a calamity in one country can adversely impact the other.

Though robust partnerships with other countries must be sought in line with the non-alliance foreign policies of both countries, such efforts must be bounded by an atmosphere needed for peace, prosperity and stability.

Among others, freedom of navigation in the Indo-Pacific together with a rules-based international order and peaceful settlement of disputes are of common interest. While avoiding advocacy of zero-sum solutions on crucial issues, both countries must seek to harmonise strategic and other interests in line with common values and socioeconomic compulsions.

The socioeconomic development of Sri Lanka has remained linked to India. But there are many options available to address issues of imbalance and asymmetries. For instance, Sri Lanka can encourage Indian entrepreneurs to make Colombo another business hub for them, as logistical capacities and facilities for rest and recreation keep improving in Sri Lanka.

Integrating the two economies but with special and differential treatment for Sri Lanka due to economic asymmetries can be fast-tracked for this purpose. There is immense potential to accentuate or create complementariness, using locational and human resource potential, for harnessing benefits in the modern value chains.

Robust partnerships across the economic and social spectrum can promote people-to-people bonhomie. And engagement of legislatures is essential for promoting multiparty support.

With many countries receding into cocoons due to the pandemic, this is an opportunity for both countries to focus on the renewal and revitalisation of partnerships.

This article was originally published in the Hindu, the English-language daily owned by The Hindu Group and headquartered in Chennai, Tamil Nadu
https://www.thehindu.com/opinion/op-ed/modern-tools-age-old-wisdom/article32206425.ece

The Charter of the United Nations: Ideals for Shaping Our Reality