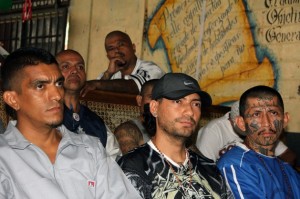 Leaders of the Mara Salvatrucha in the Ciudad Barrios prison in the eastern Salvadoran department of San Miguel, in 2012. Credit: Tomás Andréu/IPS

After decades of harrowing gang crime, homicides have plunged in El Salvador on the watch of the new president, Nayib Bukele. Faced with the growth of the MS-13 and 18th Street gangs, previous governments resorted to “iron fist” policies to crush them, only to find these fuelled a backlash.

Since his 2019 election, President Bukele, a self-styled outsider, has won huge public support by presiding over a 60 per cent fall in murders. Yet prospects that this achievement will endure are in doubt. The collapsing homicide rate may stem not only from the government’s public security policies, but also from the gangs’ own decision to curb bloodshed, possibly due to a fragile non-aggression deal with authorities.

Bukele still enjoys remarkable popularity and has the capital to make progress on these fronts. Some of his policies thus far provide a good base for an approach that sustainably reduces the horrific bloodshed of El Salvador’s recent past. But short-term political calculations and an unnecessarily combative stance toward rivals risk distracting him and undercutting such an approach

The Bukele administration argues that the plummeting murder rate – with daily killings now standing at their lowest rate since the end of the country’s civil war (1980-1992) – represents the crowning achievement of a new security strategy. In theory, the government’s Territorial Control Plan couples robust law enforcement with violence prevention schemes.

It has reinforced joint police and military patrols in 22 municipalities suffering high rates of crime, while toughening confinement measures in jails in a bid to sever communications between inmates and the outside world. At the same time, the government’s goal of building dozens of “cubes” – glass-walled recreational and education centres – represents the flagship effort to brighten the lives of young people growing up under gang dominion and prevent recruitment into their ranks.

The precise reasons for the nationwide drop in homicides are hard to pin down. Statistical studies show that the Territorial Control Plan is most likely not the sole cause; specific local falls in murder rates do not correspond precisely to those areas where the plan has been implemented. Instead, in large part, gangs appear to have themselves decided to scale back their use of lethal violence.

Unassailable control over communities, declining gang rivalry and increasingly autonomous gang leadership outside jails may explain this decision more than the Territorial Control Plan. Yet other government policies might have played a role: numerous analysts and local activists ascribe the gangs’ move to an informal understanding between them and the authorities, who have allegedly ordered security forces to dial back their clashes with these groups.

A sudden killing spree attributed to MS-13 in April illustrated just how precarious the gangs’ commitment to reducing violence can be. Bukele’s reaction to the attacks, which left over 80 dead in a five-day span, reaffirmed his inclination to adopt punitive measures to force gangs into submission.

Images shared around the world from inside El Salvador’s high-security jails revealed inmates huddled together or forced into shared cells without any access to daylight. Although murder rates have since fallen again, the risk remains that gangs, now short of extortion income due to lockdown measures and indignant at the government’s crackdown, will once again resort to extreme violence. 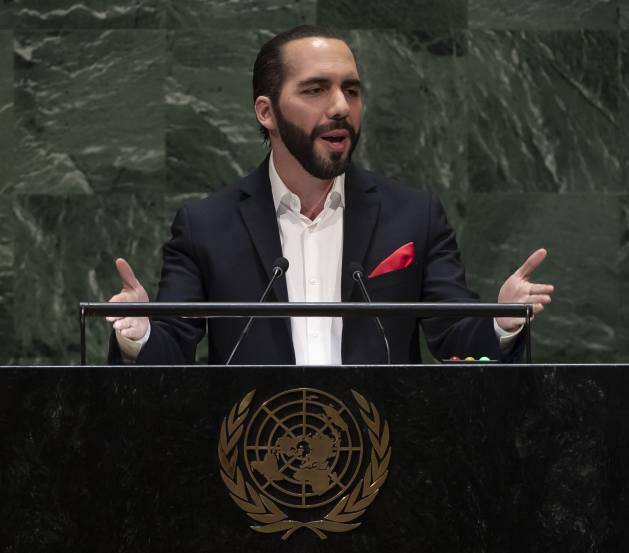 Bukele’s political struggles reinforce the danger that improvements in security will be knocked off course. Some of the president’s moves to subdue his opponents and concentrate power in his hands, including the military occupation of the opposition-held Legislative Assembly in February and repeated fights over the legality of measures adopted during the COVID-19 emergency, have sparked outcry, particularly from foreign powers and civil society organisations.

His shows of strength toward the two parties that held a stranglehold on power in El Salvador for 27 years, as well as toward state and judicial institutions, serve his goal of winning a parliamentary majority in 2021. But by turning public security and health policy into a stick with which to beat his adversaries, the president could deprive his reforms of the wide political support they need to be effective and sustainable. Should violence resurge, he might also be tempted to resort to coercive policing in a bid for quick results, despite ample evidence from the tenure of previous governments that such measures usually backfire.

At a time when the national lockdown is starting to taper off, the government should strive to use its high levels of support to ensure that violence reduction becomes a lasting achievement. It should build on its existing programs and officials’ extensive networks of local contacts to ensure the needs of violence-affected communities are defined and addressed so as to prevent recruitment of vulnerable young people into gangs.

Callous new prison rules should be scaled back, or at least combined with a far greater effort to design rehabilitation schemes for jailed gang members. Security forces, for their part, should continue where possible to reduce their clashes with gangs and young people living in poor communities, and instead focus resources on capturing and prosecuting the most dangerous offenders.

Most importantly, the government could be in a unique position within the next year to decide whether or not to re-engage the gangs in dialogue. The failure of the gang truce in 2012-2013, which prompted an unprecedented spike in homicides after it fell apart, shows the risks of negotiating with hardened criminal outfits before a hostile public.

Should the gangs keep murder rates at current lows, however, and cooperate with authorities in ensuring health and humanitarian access to communities throughout the pandemic, then the government could seek to open talks. These might aim at establishing a process designed to address the deep-seated grievances that fuel El Salvador’s gang-related violence in exchange for members handing over their weapons.

Local initiatives to bring peace and development to marginalised communities could stand at the heart of these efforts. They could help build the trust required to embark on a national dialogue, which in turn should look to promote reforms that can eventually lead to the gangs’ disarmament and peaceful reintegration into society.

Bukele still enjoys remarkable popularity and has the capital to make progress on these fronts. Some of his policies thus far provide a good base for an approach that sustainably reduces the horrific bloodshed of El Salvador’s recent past. But short-term political calculations and an unnecessarily combative stance toward rivals risk distracting him and undercutting such an approach. Foreign donors and domestic political forces should urge him not to waste a rare opportunity to calm El Salvador’s troubled streets.

This article is an executive summary, the full original report produced by the Crisis Group can be found here: Miracle or Mirage? Gangs and Plunging Violence in El Salvador

The Fuzia Story: Empowering Women Through the Fusion of Cultures and Ideas

Providing an Education in Favour of Senegal’s Girls