Farmers in Busia County, almost 400km to the west of Nairobi City in Kenya have begun to embrace cotton farming with enthusiasm just four months after re-introduction of the crop in the region.

The county shares its borders with Uganda and is situated in western Kenya formerly known as Western Province.

Alongside the hybrid varieties that were given to over 4,000 farmers in five sub-counties of the expansive county namely Samia, Matayos, Teso North, Teso South and Nambale sub-counties, was the high yielding BT cotton – a genetically modified variety that produces an insecticide to kill bollworms and other pests.

Farmers abandoned cotton more than 20 years ago because of low yields, poor returns and quality was damaged by pests.

Worse still, the liberation of the domestic textile industry in the 1990s shrank the cotton market a move that pushed the farmers to oblivion.

He said many farmers have realised that the crop can fetch good money now that the government is reviving the textile industry with planned revival of major ginneries including Samia based Luanda ginnery that was allocated Sh30 million (USD3million) by the State.

Mr Okuku who is also the vice chair of Matayos Cooperative Farmers Society based in the area said so far his one-month old hybrid cotton has shown promising prospects compared to the conventional varieties that recorded poor germination rate.

“The demo plots in Alupe really impressed me to venture into cotton once again after years of low yields. The cotton in my farm looks like it has been here for over two months yet its half that period,” he said in his farm where he planted the C570 variety. He was referring to the first BT cotton that was planted at Alupe University College, a few kilometres from Busia Town.

He disclosed that he planted the two varieties separately to compare notes and so far there exists a very thin line to differentiate the two, urging Busia farmers to embrace the crop.

“If all goes well I expect my first harvest in November this year.”

Another farmer, Beatrice Akinyi from Nambale sub-county said the move by the government to provided farmers with certified seeds has changed their attitude towards cotton farming.

“Earlier, we depended on conventional varieties that grew tall, yielded few balls and were easily attacked by bollworms. However, the seeds we have been provided with by the government are better and attract high yields,” she said.

She however, urged the government to improve cotton farming by also providing fertiliser and ensuring better market prices.

“We want the government to address the issue of collapsed ginneries like the one at Muluanda, Malakisi and Nambale that made farmers abandon cotton farming completely in the 1990s,” she added.

He said that the government should fast-track issuance of BT cotton seeds which are high yielding and don’t need intense spraying.

“With introduction of BT cotton, the industry will be revolutionised and more farmers will embrace cotton farming in the country,” she said.

Cotton trials in Busia County started in early March this year, with the launch of the first ever genetically modified BT variety in a move that propelled Kenya to join other six African nations that had already commercialised it.

Busia was the best choice for the launch because it’s among cluster of counties in the Lake Region that hold the most promising potential for cotton growing.

Four months down the line, the results on the ground are encouraging at Alupe Demo Farm with about 70% seed survival with each plant producing over 40 balls.

With proper follow up of agronomic practices, a farmer can harvest between 1000-2,000 kilograms per acre.

At least 260 kgs of BT cotton seeds and 2,740 kgs of hybrid seeds were distributed free of charge to farmers in Busia by the Government with plans in place to distribute more.

At the moment there are five demo farms spread across the county in Teso North, Teso South, Nambale, Butula and Matayos sub counties with more expected to come up in the next planting season.

Farmers are encouraged to intercrop cotton with legumes to maximize on the use of their land.

The adoption of the BT cotton is expected to support the Government’s Big Four Agenda by aiding manufacturing pillar with farmers commercially earning more from the crop through increased production.

Cotton being a major cash crop in Busia county, with a potential acreage of 4,000 hectares, there is need to adopt new technologies that will reduce the cost of production and hence increase incomes to farmers. 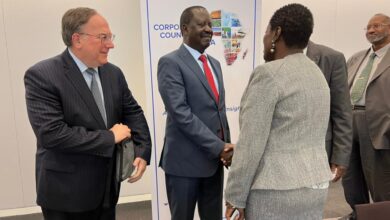