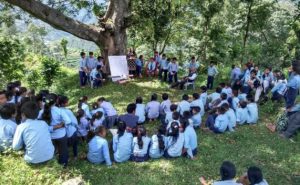 Nepal’s education system was in crisis long before the pandemic hit. But with schools closed now for four straight months, remote learning has also exposed the class divide in access to education.

There was already poor quality of instruction in government schools, and parents were sending their children to more expensive private institutions. But this inequity in schooling has been further exacerbated by the need for remote instruction due to the COVID-19 crisis.

While better endowed schools are conducting online classes, the digital divide has meant that a majority of schools and students in the country have been left out.

“It is difficult to conduct online classes even in households that have equipment. Some families have only one smartphone or laptop and there are up to three children taking online classes simultaneously”

By making self-contradictory rules, the government has sowed further confusion. It announced classes would be conducted through ‘alternative’ systems, but did not ensure that students had tv sets, mobile data, laptops, and did not train teachers in distance learning.

Even in Kathmandu Valley, many students do not have access to computers and WiFi to take online classes, so the situation in the remoter districts are much worse. Meanwhile the Ministry of Education, Science, and Technology just issues directives, tells schools conducting regular online classes not to charge fees, but without making alternative provisions for teacher’s salaries.

In May, the ministry issued the ‘Student Learning Facilitation Guide for Alternative Systems’ which mentioned radio, television, online and offline lessons, self-learning, and remote teaching as methods to be used. But uneven access to technology has created a divide in the past four months between those who get to learn who does not.

“The main problem with alternative learning systems is the digital divide,” explains Shishir Khanal, co-founder of Teach for Nepal. “The only way to bridge this is to go back to in-person teaching by organising staggered classes with precautions, or for teachers to physically visit students’ homes maintaining distance. Trouble is that many of the schools have been converted to quarantine centres.”

A survey of access to technology in Tulsipur in the western Tarai recently showed that even in the town, only 6% of students in government schools had WiFi access at home. Only 21% in higher education had radio sets at home for FM classes.

There is technology gap among students even in Kathmandu Valley. At the Pragati Shiksha Sadan Secondary School in Lalitpur, only a quarter of students are taking online classes. Of the rest, many are stuck outside the Valley because of the lockdown and poorer families cannot afford laptops and Wifi.

Principal Surya Prasad Ghimire says the school is conducting classes for lower grades through radio and television, and higher classes online. He adds: “Students in the Valley studying in government schools are from weaker economic backgrounds, and do not have the equipment to take online classes.”

Professor Ram Krishna Regmi says the digital divide has brought out the class divide in Nepali society. He says: “Focusing only on teaching through the use of technology is discriminatory for people who do not have access to it.”

Ministry of Education, along with local levels and schools, decided to classify students who did not have access to the internet and provide them with resources to aid their learning. They were instructed to categorise students according to access to radio, FM radio,  tv, and access to a computer but no internet.

In Lalitpur, for example, students in 219 government schools who do not have online access have been instructed to listen to radio or tv classes at a specified time. However, Mahendra Chhetri at Lalitpur Municpality admits that alternative learning is inherently unequal unless the technology gap is bridged.

Even before the government decided on alternative instruction Bhaktapur had already started remote learning through a local tv channel in its 33 public school, while many of the 60 private schools are doing online classes.

However, despite this there are problems of access. Hari Parsad Niraula of Bhaktapur’;s education department says while 80% of the students from private schools are taking classes, only 48% from public schools are online.

In Kathmandu, there is a total of 500 private and public schools. According to Ishwar Man Dangol, spokesperson of the Kathmandu Municipality, most schools have effectively implemented an alternative learning system. Apart from using Zoom and Messenger,  schools are broadcasting lessons through radio and tv.

“It is difficult to conduct online classes even in households that have equipment. Some families have only one smartphone or laptop and there are up to three children taking online classes simultaneously,” says K B Karmacharya, a teacher in Wagishwari Higher Secondary School. “The parents are getting fed up.”

One government school in Dharan in eastern Nepal had around 30 students who did not have access to online platforms, radio or tv, says principal Indra Mohan Jha. “Even if families have laptops or phones, they do not have WiFi and cannot afford mobile data.”