In these difficult times for the Palestinian people and for justice, the Government of Israel is proposing to add further to the turmoil by unilaterally absorbing large swathes of the Palestinian West Bank of the Jordan River. It might therefore be fitting to remind the world of the chronology of the events leading up to the creation of the State of Israel in May 1948. 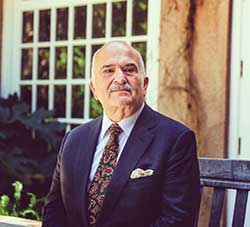 In 1947, the UN had passed Resolution 181, which clearly divided Palestine into two states, one Arab and one Israeli. Sadly, Israel—almost immediately after coming into being—adopted a policy of intimidation aimed at the civilian population of those areas allocated to Palestine, resulting in the Nakba, the catastrophe which led to the fleeing of the inhabitants of those areas to safe haven in neighbouring countries, and adding further to Palestinian diaspora.

As a consequence of the Israeli aggression, the Palestinian people asked Jordan to intervene to protect and ensure their territory. The Arab Legion, largely commanded by British officers, secured East Jerusalem and the West Bank from Israeli occupation. This led to the Rhodes General Armistice of April 1949.

Subsequently, at the Jericho meeting in 1950, Palestinian notables requested the “Constitutional Union” of the Hashemite Kingdom of Jordan, the West Bank and the Old City of Jerusalem. The agreement was that this should prevail until such time as a Palestinian state could come to fruition, without prejudice to the inherent Palestinian right to Self-Determination.

It would be useful to recall that The Partition Plan Resolution of the General Assembly of 1947, upon which Israel relied for its declaration of statehood on the 14th of May 1948, was meaningless unless Israel accepted the UN Charter under which the territory and people of Palestine were already subject to the legal imprint of Article 22 of the Covenant of the League of Nations, the Mandate for Palestine 1922, and the UN Charter of 1945.

The Charter expressly included “the principle of self-determination of peoples”. Israel’s attitude to the UN Charter is consistently selective, invoking what assists its case, and ignoring what destroys it.

In November 1947, my grandfather King Abdullah I wrote in an article in the American Magazine: “We Arabs ask no favours. We ask only that you know the full truth, not half of it. We ask only that when you judge the Palestine question, you put yourself in our place.”

The full article can be found on my late brother King Hussein’s website: http://www.kinghussein.gov.jo/kabd_eng.html.

These words were written on the eve of the 53rd anniversary of the 1967 war.

HRH Prince El Hassan bin Talal served as Crown Prince of Jordan from 1965-1999 alongside his brother, the late King Hussein of Jordan.

The post We Arabs Ask No Favors….. appeared first on Inter Press Service.

The Struggle for Land and Food in the Locked-down Philippines